Edwin McFee dons his best bucket hat as Our Kid sends fans over the blue moon at Belsonic.

After his famous, ill-fated fight with a helicopter which forced a suitably dazed and confused Liam Gallagher to postpone his date with Belsonic last year, the ex Oasis man finally returns to the north tonight and he looks ready for a rumble. We’re only one song in (the molar-bothering (What’s The Story) Morning Glory? rocker ‘Hello’) and he’s already calling out a fan for their (*checks notes*) shite taste in football teams.

“Get that top off you. We’re Man City here lad” he growls, much to the delight of this diehard Sky Blue reviewer, it has to be said.

A euphoric ‘Rock ‘N’ Roll Star’ quickly followed by an incendiary run through of ‘Morning Glory’ (complete with flares being set off in the crowd) affirms Our Kid’s promise to make it up to Belfast is one he intends to keep. After that hat trick, we all feel a little like Ilkay Gundogan did after his famous brace last month.

“Thanks and good night” deadpans Liam as he pantomimes leaving the stage knowing full well he’s got the crowd right where he wants them and is only getting started.

There’s definitely a football match vibe here in Belfast, but tonight everyone’s on the same team and willing Gallagher to deliver something biblical
Next up is Liam’s resurrection song ‘Wall Of Glass.’ A hook laden, soul-spiced deserved set staple, his first solo hit re-established the singer in the charts and hearts of the globe and this evening it’s welcomed like an old friend. 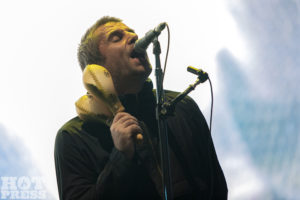 Liam is in top form all night, cracking jokes (“If you get the chance to travel in a helicopter-don’t bother!”) and keeping his tongue firmly between his cheeks throughout (“Are there any Oasis fans in the field?”).

It’s the songs from his former day job that really unite the crowd who are made up of a battalion of bucket hat sporting fans from the '90s all the way down to 16 year’s getting their first earful. Definitely Maybe stand out ‘Slide Away’ provokes a mass singalong and remains an evergreen slab of rock ‘n’ roll, while set closer ‘Once’ from 2019’s Why Me? Why Not. is a beautiful ballad that doesn’t leave a dry eye in the house.

And the hits keep coming for the encore: ‘Some Might Say,’ ‘Cigarettes & Alcohol,’ ‘Wonderwall’ and ‘Champagne Supernova’ all quickly follow each over to send the 15000 in attendance over the blue moon. “Fuck the Reds” says Liam finally as he swaggers off stage and who are we to disagree? C’mon, you know….