I think the last time I saw Pixies was on an odd double-bill with Kings Of Leon in the Aviva. My mate The Coff, who I’m fairly sure was there with me, doesn’t believe it happened at all, and I can’t be 100% sure either. I’ve just checked the Hot Press Archive. It was about seventeen years ago, apparently, back when it was still called Lansdowne Road. The reason for our foggy - and fogey - memories is that – on top of the usual refreshments – it just seems so unlikely.

That’s probably The Coff’s battered CD of Doolittle on the shelf over there too, borrowed years ago, because – I think – it was he who turned me on to them in the first place back when another American band were spinning their loudquietloud dynamic into platinum. This was before most of you were born, in the very early nineties when Pixies music was a regular feature of Monday’s ‘Alternative Disco’ in the Maynooth University Student’s Union bar, where we were temporarily stationed. I’m sure it was a similar story in most other colleges around the world because, starting with Surfer Rosa in 1988 – the painfully hip would also talk about something called the Come On Pilgrim E.P. from the year before – through Doolittle a year later then 1990’s Bossanova and 1991’s Trompe le Monde, Pixies gave us a series of albums – four in four years! – that really laid the foundations for everything that would come under that “alternative” umbrella in the decade that followed. If – and I'm still not certain - they came back to fill rugby stadiums with the ”journeymen” who bequeathed us ‘Sex On Fire’ years later for a big heap of money then they had more than earned that right.

Danny Mc and I were enjoying this freakishly great weather, leaning against a railing at the back of the Iveagh Gardens as the rather pleasant sounds of support band The Slow Show – if they’re named for that National song, it’s a good descriptor, and I can hear a bit of Tindersticks as well – washed over us. The great thing about the venue, we both agreed, is that we could have stayed in that position and have comfortably taken in the night’s entertainment; there’s a good view from every angle, the facilities are well-laid out and easily accessed, and the sound is very good for a place without a roof. Though I might have half wanted to, we didn’t do that of course, and made our way down to a slightly off-centre forward location. Hot Press snapper Colm Kelly had heard a report of a great Pixies show in Galway two nights before and my own pal O’Doherty claimed they were so good in places that he was nearly in tears, and this from a man who usually had all the emotional range of a particularly taciturn stone. 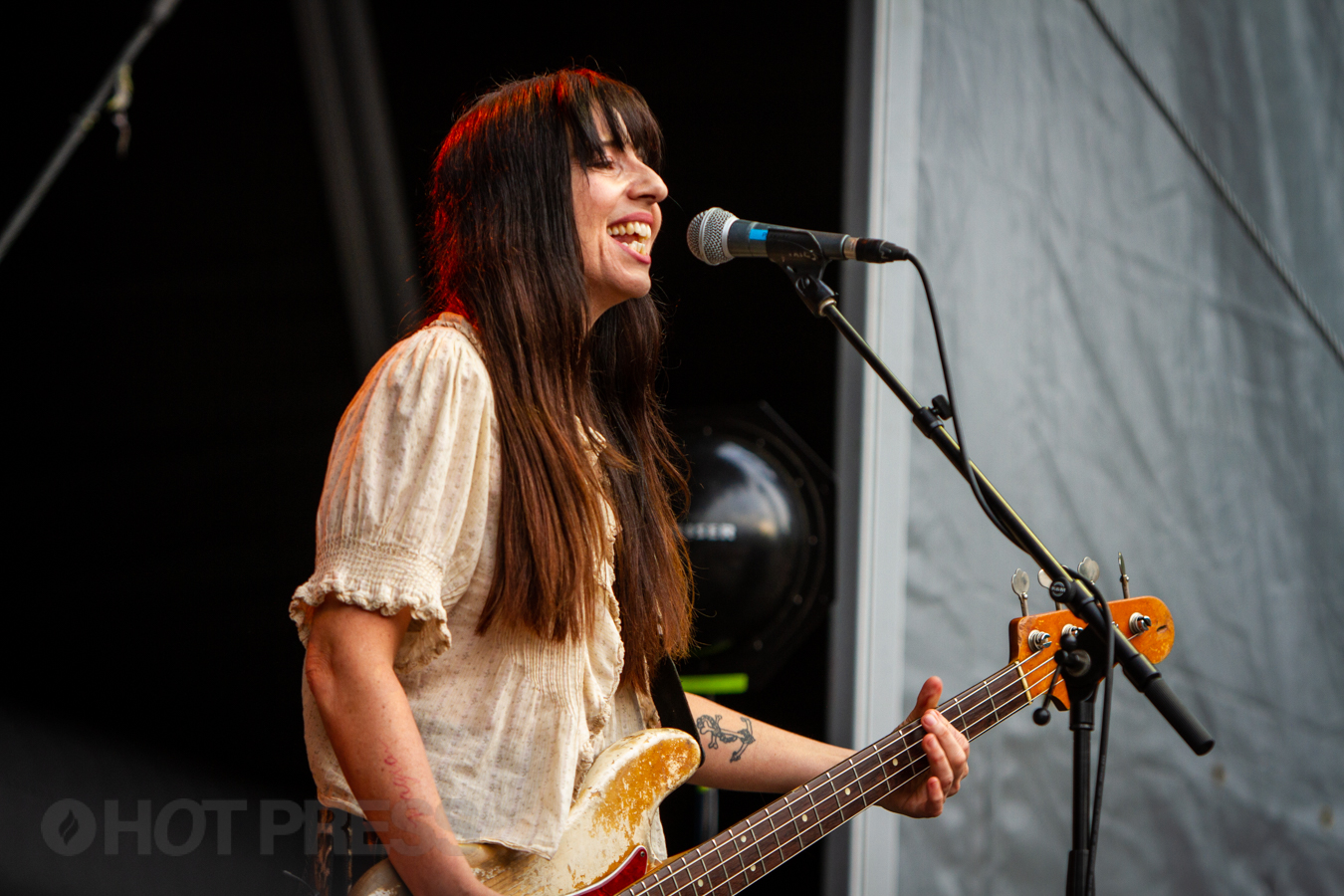 The band walk on casually at about 8.30. Black Francis/Frank Black is looking well and that might even be a smile. A bunch of roses lands at bass player Paz Lenchantin’s feet. She’s been with the band since 2013, when she replaced Kim Shattuck, who had been brought in after the departure of original bassist Kim Deal. Lenchantin is brilliant throughout, prompting one gas ticket to lean into me and suggest I write that she’s the “real Deal” but that’s terrible so I’m not going to. If she saw the memo about not smiling or interacting with the crowd, she must have torn it up and thrown it in the bin.

How’s this for an opening blast? Surfer Rosa’s ‘Cactus’ – a song so good Bowie covered it – then the motorcycle crash of the “son of a motherfucker/son of an incestuous union” ‘Nimrod’s Son’ and then -Jaysus- ‘Here Comes Your Man’, which has the crowd grinning like they’ve all dipped into the same bag and has Lenchantin beaming like her ship arrived into port. There’s the usual cooly economical guitar solo from Joey Santiago before we all give it a bit of “Ah -OOO!”. It would seem that the reports from the west were correct.

Over the following two hours, Pixies played what I estimate to be 39 songs. There was, as many people commented after, absolutely no faffing about or, as Kelly put it, “any of that 'I did a DNA test last week and it turns out I’m 13% Irish' shite!”. While there was more recent material like the country-tinged ‘Death Horizon’ from 2019’s Beyond The Eyrie and this year’s ‘There’s A Moon On’ which bodes well for September’s Doggerel, the lion’s share of the set was taken from those aforementioned albums. I could go through each one, because it was uniformly fucking great, but I’d be here all week and you'd give up after a few more paragraphs. Let me offer a few impressions instead. 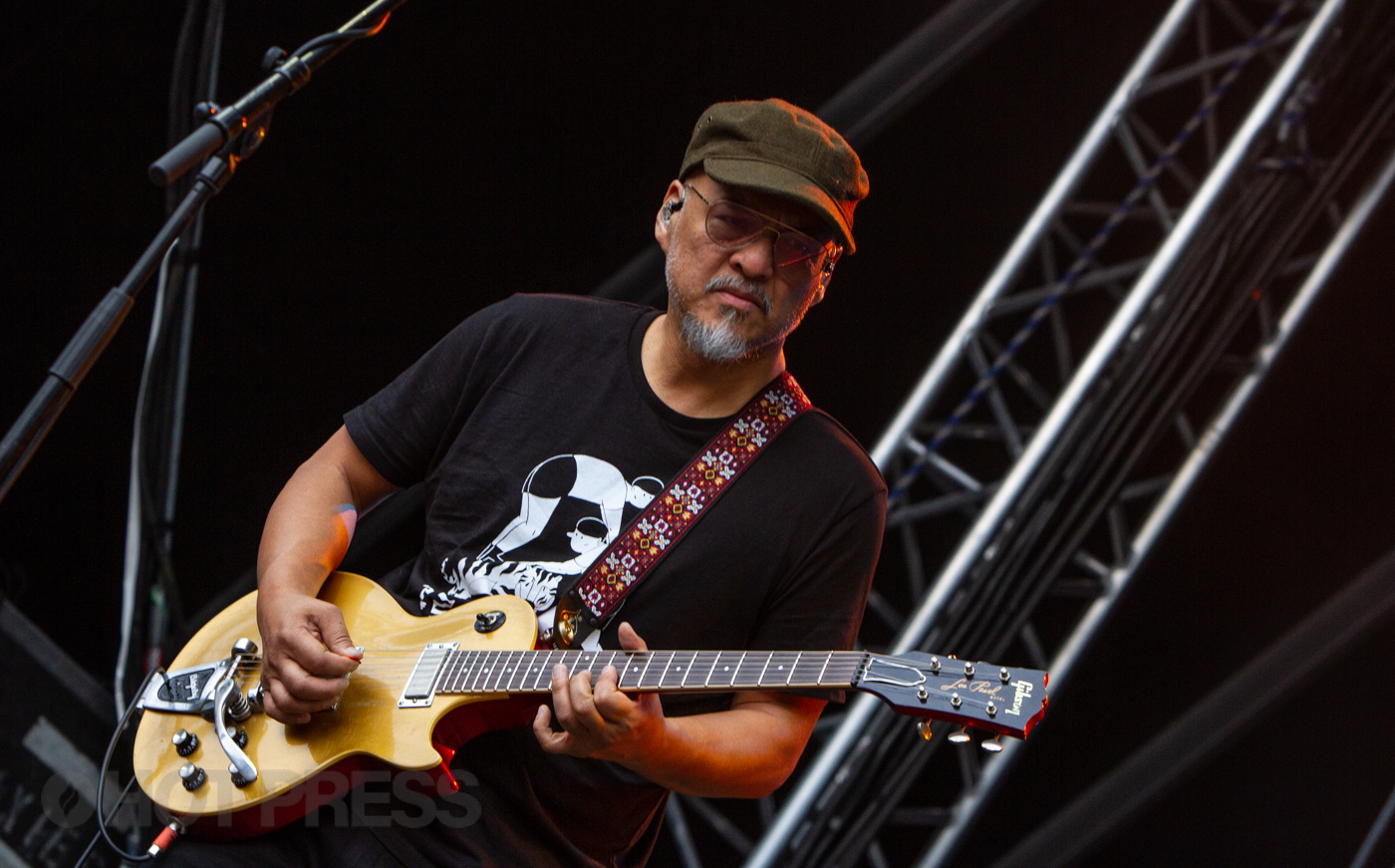 Joey Santiago is a great guitar player, especially because he staunchly refuses to head off into the bluesy soloing that bogs down so many lesser talents. Look at him during ‘Vamos’ where he takes the cable out of his guitar and then fingers the end of it, producing wild feedback while pointing it at the crowd, listen during ‘Caribou’ as he makes the amp scream and then conjures a howling storm for the solo. At times tonight – ‘Bone Machine’ is a good example - it sounds like he has the guitar on a torture rack, where he’s water-boarding it one minute, then casually pulling out its fingernails the next, and the guitar seems to be welcoming the attention. Near the end, during ‘All The Saints’ from 2016’s Head Carrier, he appears to be sending instructions by morse code to six-string-wrestlers everywhere in need of inspiration.

David Lovering is just ridiculous. The man turned sixty last year but he attacks his drums like a starving cheetah who’s finally come across a lame gazelle. Because of the band’s decision to try to play their entire collected works in just two hours – Kelly: “it’s as if they’re shoving in as much as possible in case they don’t get to do it again” – there is little or no break between the songs but Lovering never drops a stitch. Listen to that military tattoo in their version of The Jesus And Mary Chain’s ‘Head On’, which sounds like Eddie Cochran on some serious amphetamines, the mutated shuffle of ‘Isla de Encanta’, or the beat that Nirvana owe an awful lot of money to behind ‘U-Mass’ where our man holds the whole thing together while Santiago appears to be applying a sander to his guitar to finally finish it off. I can only presume Lovering had an ice bath waiting to cool him down when he walked into the wings. 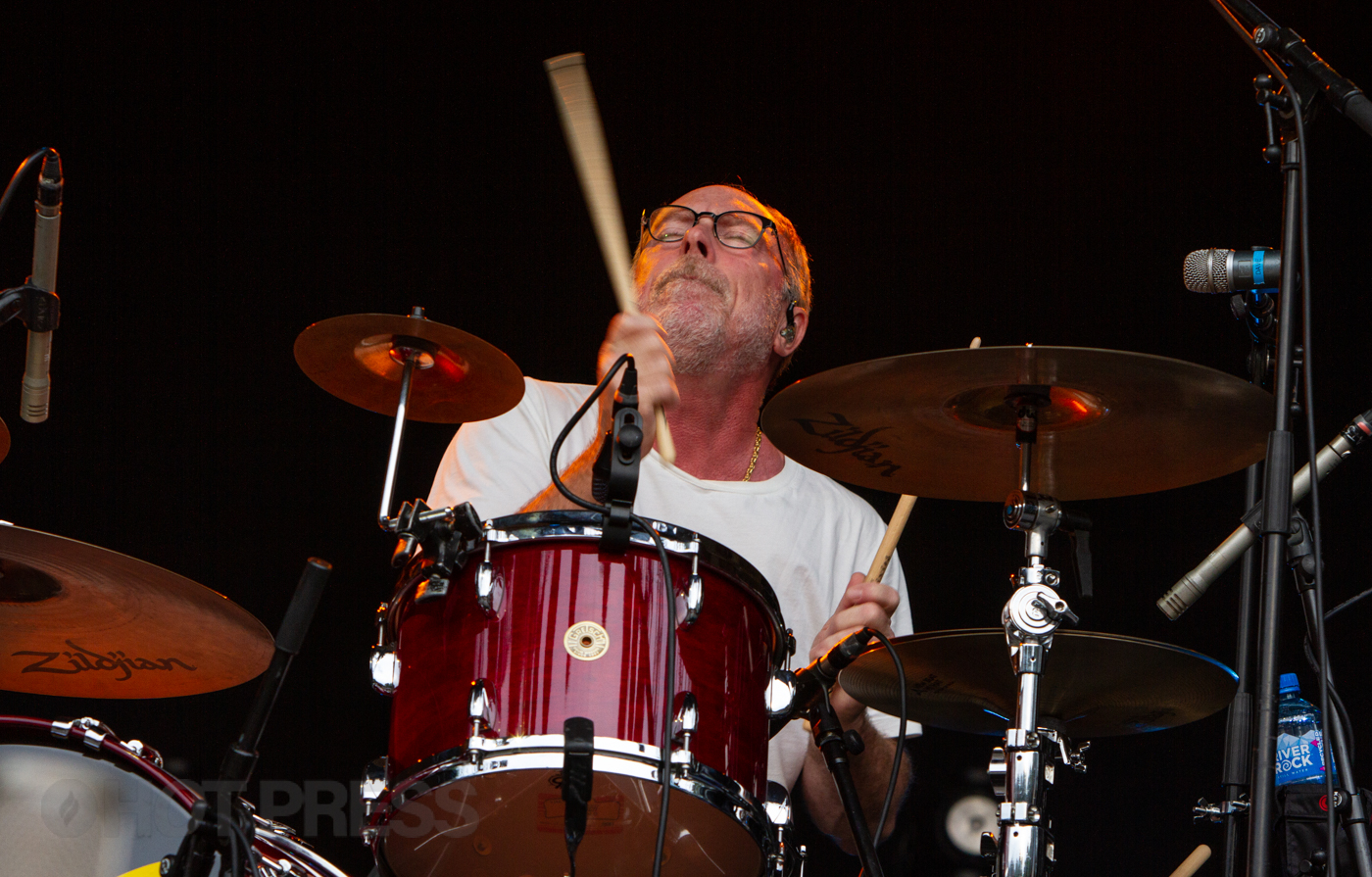 Can’t say enough about Lenchantin. Great bassist – the bottom end is almost leading on several Pixies songs – and a great singer, although her mic seemed slightly turned down earlier on, but that might have been where I was standing. Her lead vocal on ‘Gigantic’ were perfect, she managed to make a pair of leather trousers – in the Pixies! – look cool, she was throwing shapes like she was in Hawkwind during ‘Dead’, and she even gave it a proper bit of Philo-style fist in the air during ‘Debaser’ as the lights flashed over the crowd and we all howled ‘SHANK!’ - yes, I know it's not actually 'shank', but that's what it sounded like - back at her.

If you’re reading this, you probably don’t need to hear much from me about Black Francis. One minute he’s screaming, the next he’s whispering. The lyrics sparkle with originality whether he’s dreaming of being Lou Reed, fearing the loss of his penis to a whore with disease, or evoking Buñel and Dali’s nightmares. If he appears emotionless – and he doesn’t because I definitely saw him grin at Santiago at least one – that’s because he’s got a serious job to do. He’s an underrated guitarist too, whether on acoustic or his telecaster, giving Santiago room to move and even essaying some tuning peg manipulation for ‘Velouria’.

The crowd – a mix of the ancient like me who were around when they first broke through and younger, more healthy looking types – had a ball, doing a lot jumping around down the front and singing along to everything, even Black’s possibly - I'm not equipped to tell - "pidgin" Spanish/Esperanto. Over near us one woman mastered balancing on one leg while spinning her crutch in the air and a giant, bearded bloke lost it altogether during ‘The Holiday Song’. He was taking to the air like a particularly demented basketball player and landing with such force that Aisling beside me, sporting light summer footwear, feared for her toes.

As for the songs themselves, I’ve already listed so many great ones, you surely wish you had been there. Hard to pick standouts from a show as spectacular as this but the B-Side “UK Surf” slower version of ‘Wave Of Mutilation’ was particularly good as was the Californian surf of The Surftones’ ‘Cecilia Ann’ but there was no filler at all. If you wanted to niggle, I suppose you might say that Pixies aren’t afraid to fall back on four-note bass figures and that loudquietloud pattern that the band have always freely admitted to anyway, but sticking with a winning formula never did a hundred other great bands any harm and there’s so much more to them than that.

We Ooh-Ohed along to the closing ‘Where Is My Mind’ and gave a richly deserved bellow of thanks for what we'd just been given. The band seemed pleased too, waving and then bowing together. There was no messing, no bullshit, and no fat, just two hours of brilliant songs, played by a band that came here to work. Danny has been at a lot more Pixies gig than I have. He reckoned this was the best one. I can’t argue.