A sea of youthful faces dressed predominantly in purple filled up Fairview Park last Thursday to see Grammy winner Olivia Rodrigo finally bring her SOUR tour to Dublin. What an impact the Californian has, especially on the younger generation of adolescents looking to fight their way through an emotionally chaotic era of their lives.

One of the reasons why Rodrigo earned superstar status over the last two years is her ability to bottle these emotions, as if reading aloud pages of other people's diaries to them. Die-hard fans held up hand-made signs in the front row, others were crying throughout the set but the screams were as deafening as Harry Styles at the Aviva Stadium (trust me, my ears almost bled at that gig).

Interestingly, Styles once defended female fans of a young age, citing their dedication to music rather than making fun of them as many others did. Olivia Rodrigo's fans come in all age groups and gender expressions, judging by the crowd last Thursday. My Chronically Heterosexual Male Best Friend (CHMBF) was screeching the lyrics just as loud as the young fans in the 'junior area' beside us, so her words clearly don't just connect with one facet of society. Most of us have experienced the moments Rodrigo wrote about on SOUR in some way, shape or form. The talented 19-year-old just managed to put it to incredible melodies, added stunning vocals and a heartbreaking backstory and we were all hooked. 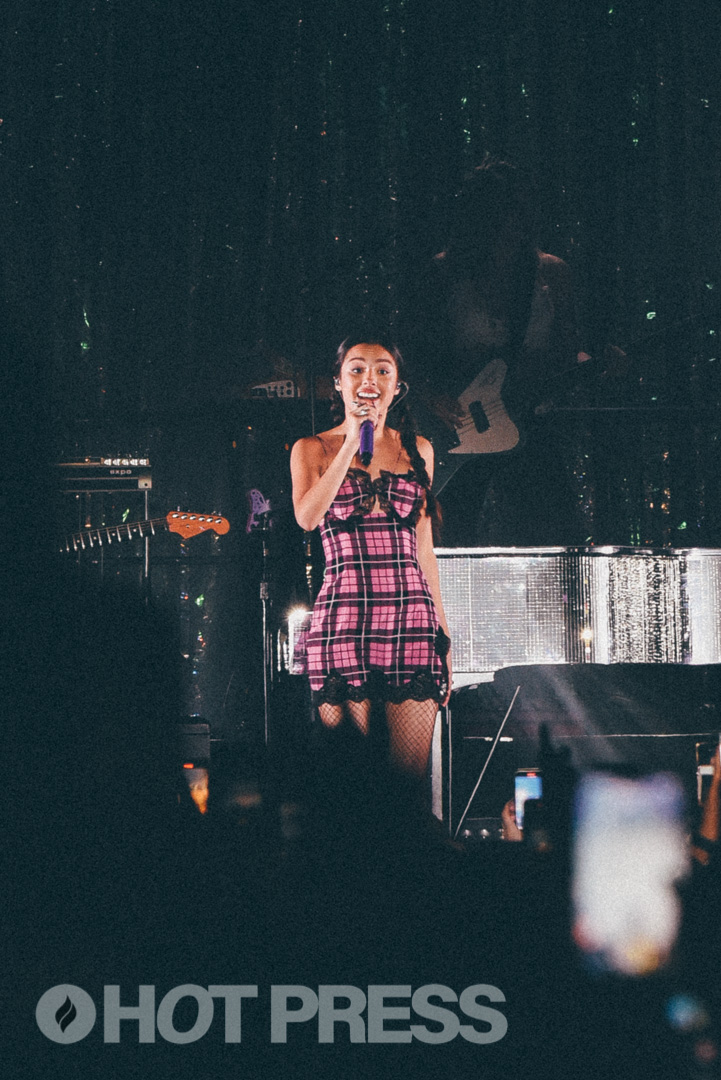 As we enter Fairview Park, teenagers sprint to us, begging us for spare or re-sell tickets. Huge groups of people are scattered outside the tent, attempting to hear any snippets of the sold-out gig. Judging by how loud the audience are, those sitting on the grass outside heard a sizeable amount.

"'Cause you said forever now I drive all alone past your street," she sings, the lyrics that arguably catapulted her to fame ringing out around the entire Clontarf area. 'Driver's Licence' arrives as only her third song in the set, which last just over an hour following Baby Queen's energetic support slot. Performing numbers from her 2021 debut album The Yearbook, the London-based musician has seen her profile rise even further after providing the core soundtrack for Netflix' beautiful queer teen drama Heartstopper.

Rodrigo kicks off the set with rock-fuelled banger 'brutal', electric guitar riffs reverberating around the packed tent. The singer-songwriter's stage presence is undeniable, sporting a pink dress as the pop-punk track gets the crowd significantly riled up. The show followed her Cork jaunt the night before, which garnered considerably rave reviews from attendees.

'jealous, jealousy' is up next, keeping up the momentum with booming choruses and raw lyricism while tackling the relatable truth of envy. "I kinda wanna throw my phone across the room / 'Cause all I see are girls too good to be true / With paper-white teeth and perfect bodies / Wish I didn't care," her fans belt out before 'driver's licence' results in waterworks. 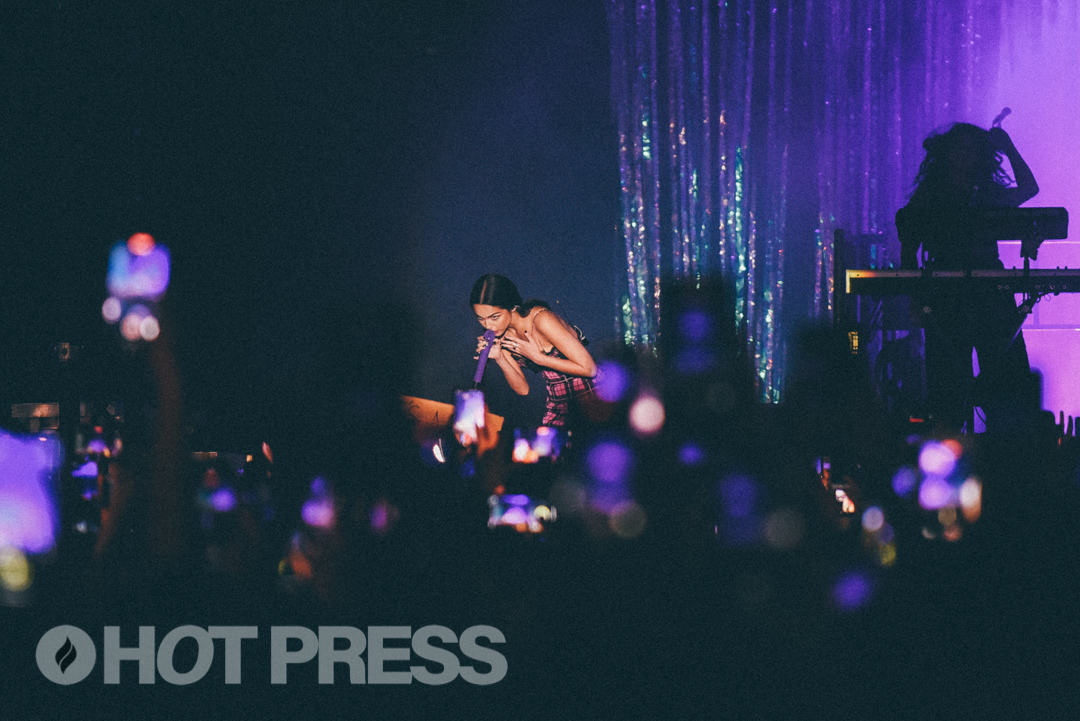 The global No.1 hit gets an enormous cheer from the crowd, who repeat the lyrics back to each and every song. Rodrigo's vocals never waver for the entire set. The pandemic smash and 2021’s most consequential pop song launched Rodrigo from minor High School Musical: The Series fame to pop-culture conflagration.

A cover of Avril Lavigne's 'Complicated' earns a massive reception (especially from those in their mid-to-late 20s, who remember buying Lavigne's debut album Let Go back in 2002). Injecting rowdiness into a 5,000-strong crowd while maintaining intimacy is a skill in itself, but the newly anointed pop star and former Disney kid makes it look easy.

She's even got the reluctant dads minding their daughters in the group singing along, impressively. Walking to each side of the stage, Rodrigo makes sure every corner of the tent feels her appreciation. 'hope ur ok' and 'enough for you' follow, each tracing Olivia's destroyed self-esteem and lingering compassion for the person who broke her heart.

It's expert songwriting that takes a leaf out of Joni Mitchell and Taylor Swift's books. '1 step forward, 3 steps back' is a gut punch of emotion. The singer recounts walking on eggshells around an emotionally volatile partner, feeling like you can't win, no matter what.

'happier' and 'All I Want' leads to a stunning cover of Sinead O'Connor's take on Prince's 'Nothing Compares 2U'. Wrapping an Irish flag around her shoulders briefly, she tells the enraptured audience that she wanted to perform something connected to the Emerald Isle. Rodrigo chose her cover well, belting out the legendary chorus with crystal clear vocals.

'Favorite crime' leads to tears and sobs around me (I cursed myself for not bringing tissues to hand out). Arguably the most devastating song on SOUR, the track sees Rodrigo compare the damage carried out in the relationship to a crime she willingly enabled out of love. "Know that I loved you so bad / I let you treat me like that / I was your willing accomplice, honey." Those who don't get anything stuck in their eye by now must have a heart of stone.

'traitor' and No.1 hit 'deja vu' finish out her set, before riotous encore featuring 'good 4 u'. Even in a smaller setting, her quieter songs feel colossal. Bombastic and cathartic, her final songs (plus a glittery costume change) result in what I can only describe as mass hysteria. 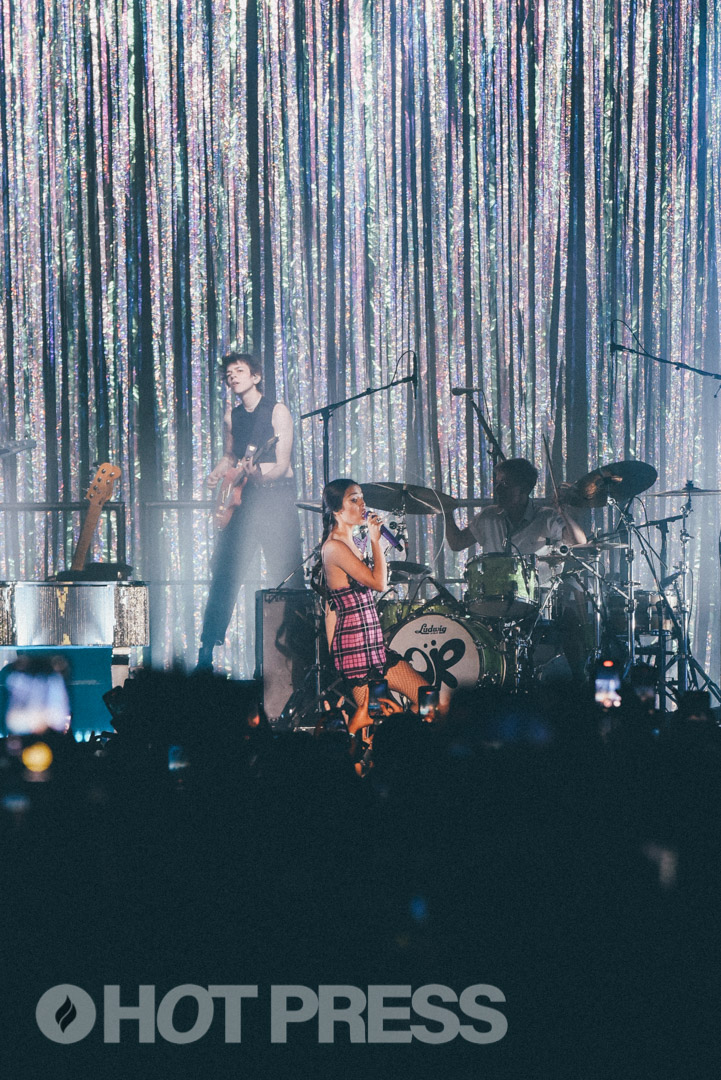 It's honestly great to see, after the s**t that generation has had to deal with over the last two years. Feeling understood in a period of mass collective loneliness leads to a devoted fandom, and the LA-based star has pieced together the puzzle.

Balancing songs about rage, frustration, heartbreak, body image, insecurities and regret; Rodrigo's tour embodies a rollercoaster of emotions, much like SOUR itself. Olivia has the audience in the palm of her hand, but she's careful with the responsibility of having such a platform. Vulnerability is a strength in itself, and makes epic music.

Listen to SOUR below.