The Soul Train To Boogie Wonderland

As is often said and much remarked upon, I love the nightlife, and I got to boogie, and if you know of a better sound for the getting down than Nile Rodgers and Chic then do let me know. The setlist they’ve honed to perfection – and it’s the same one you probably hear every time, but when you’ve got it right, why change it – is hard to believe when you see it written down. There are just too many hits. Muhammed Ali didn’t throw out this many hits. We’ll put a playlist at the bottom of this review. It’ll make your day.

Decades ago, when Rodgers and his pal Bernard Edwards were both touring with the band New York City, Rodgers, at both Edwards' prompting and because the guitarist in the support band on a stop in Miami sounded better than he did, traded in his Barney Kessel guitar for the cheapest Fender Stratocaster he could find. With a few modifications, it’s the same guitar he still uses. He calls it The Hit Maker. Rodgers didn’t so much find a new instrument in that pawnshop as a a magic wand and with it he’s cast more spells than Paul Daniels, Dr Strange, and The Great Gonzo combined. Using its power, he’s made more people smile than Santa Claus, and with it he could, if he chose to, make the dead get up and dance. When the sad day arrives, hopefully many years hence, that Rodgers is no longer with us, they should put the Hit Maker in a glass case and allow us mortals to genuflect in front of it like the holy relic it is.

Of course they’ve taken as many seats as possible out of the 3Arena, giving the people room to move. We’re sat upstairs and, for tonight at least, we can only look jealously down at the floor, which has transformed into the biggest nightclub I’ve ever seen, a sea of grinning faces who know what’s coming. All class of folk, the young and the once young, are already swaying in anticipation. There’s one gent a row or two in front of me who must be pushing eighty, but this won't stop him cutting an admirable rug once things get going, the hero.

Like everyone else in the country, I’ve seen Chic a few times since they started up business again, so I too know what we are about to receive. There’ll be none of that “here’s one off the new album” guff which always causes a stampede towards the bar. Don’t bore us, get to the chorus? Chic songs have more hooks than a pirate convention. It’s all killer and no filler. Do I have to tell you about the time I excused myself from the company of some TV star and some sports star – I didn’t recognise either of them, my pal The Coff had to laughingly tell me who they were, I may have had a few refreshments – because I needed space to get down to Chic in a field in Laois, or the time, a few years later, when I ended up on stage with them, throwing shapes for the edification of all and sundry? Of course I don’t, because most of you have similar stories. Here’s some proof anyhow. 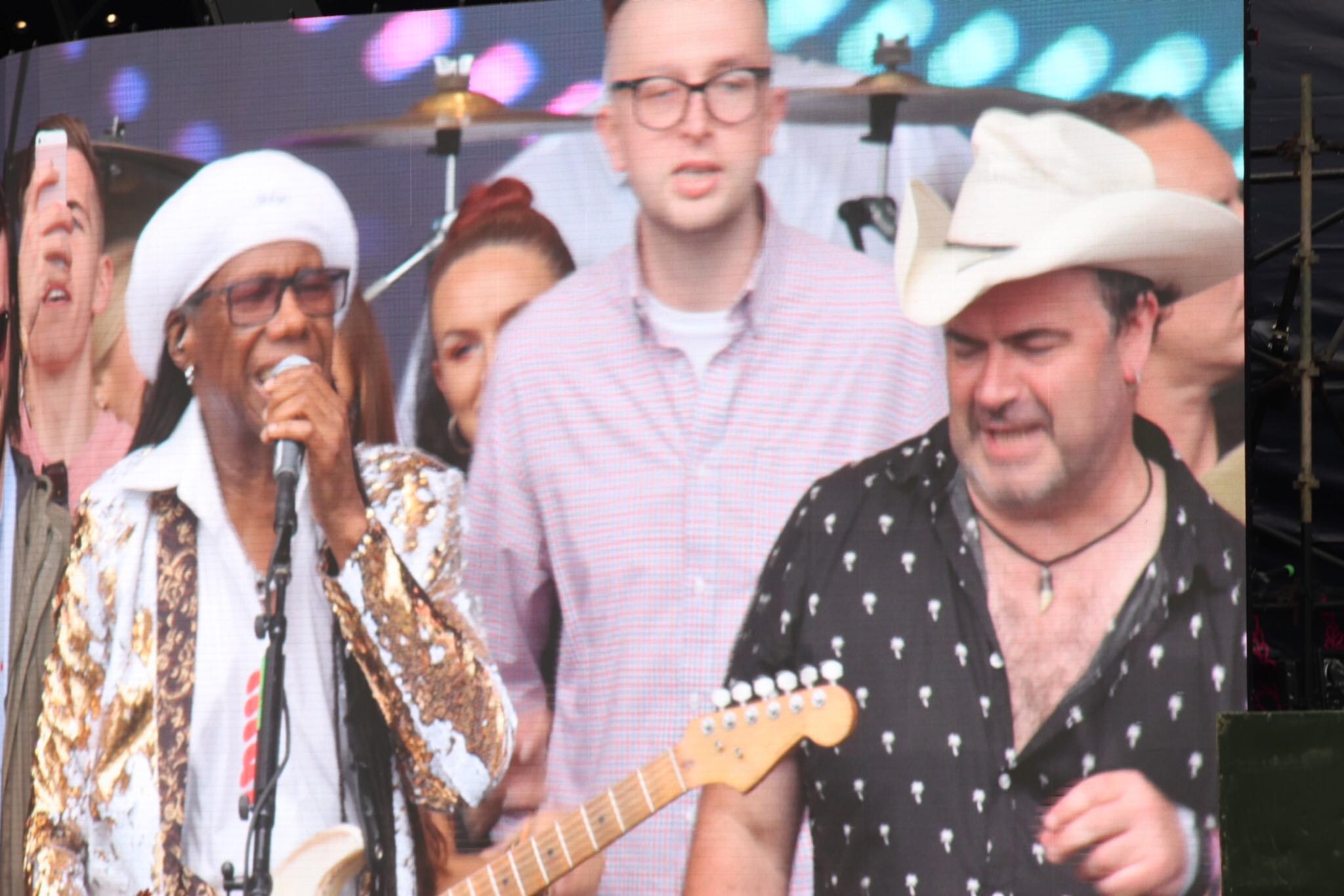 He's The Greatest Dancer. Nile Rodgers is on the left.

Anyway, back to tonight, there’s two mirror balls on the floor, on either side of the stage and what looks like the control room from a movie about the Apollo missions to the right to take care of the sound. There is a massive roar when the lights go down, the legend ‘Nile Rodgers Chic’ comes up on the screen behind them – in sequins, of course – and there they are; vocalists Kimberley Davis and Audrey Martells looking beyond glamorous in what appear to be chiffon dresses, given that photoshoot effect by two strategically-placed electric fans. In between them is Mr Rodgers – neat dreads, natty hat, sunglasses, sharp suit, white guitar, so cool he could put Zanussi out of business. They do some quasi YMCA moves and the first strutting/walk/dance to opener ‘Chic Cheer’ and Rodgers' chicken-scratch guitar carries ‘Dance, Dance, Dance (Yowsah, Yowsah, Yowsah)’. Frankly, given what comes after, these are probably two of the weaker songs offered tonight, but they’re still great and the 3Arena has an atmosphere akin to the last day of school with months of summer holidays stretching beyond it.

Drummer Ralph Rolle earns his pay for an irresistible ‘Everybody Dance’ alone, and then the horns blast into ‘I Want Your Love’. This is ridiculous. If you had two shattered legs, with multiple fractures, encased in rigid plaster, you’d still be up and moving. Rodgers and bassist – although that word doesn’t really capture his symbiotic relationship with his instrument – Jerry Barnes come out for the first but not the last time and have a casual jaw-dropping duel, making competitors, not that there are any, sound like they’re playing with broken fingers.

“You know my name is Nile or you wouldn’t be here,” says Rodgers – fair enough – before telling us all how happy they are to be in Dublin before listing some of his many collaborators, but he didn’t come to talk about his “wonderful life”, as great as it sounds, he came to play. Good. Tonight we’re his collaborators, apparently, which suits the thousands of ecstatic dancers here just fine. A medley of ‘I’m Coming Out’ and ‘Upside Down’ – both taken from Diana Ross’s 1980 album Diana, Rodgers displeasure with the master tape’s remixing long forgotten - nearly knocks the walls down. Rodgers' deftness with minor seventh chord riffs is more inventive than Thomas Edison and Barnes steps forward in the latter to slap his bass like a bold child. Without a breath, they go into Sister Sledge’s ‘He’s The Greatest Dancer’ and before we can even fathom what’s going on, they’re into a monumental ‘We Are Family’. The crowd shift into another gear they weren’t even aware they had while a globe with a heart on it spins on the screen in the background. It should be noted that at no point in the show do any of the band members – including Rodgers – turn up on that screen. Why? Perhaps because it is the groove, the funk, the music itself that is the real star. This is an ensemble playing and singing together, not an excuse for the cast to indulge in long and unnecessary solos, although they of course could, and knock you over while doing it.

Mind you, that being said, there’s then a bass groove/solo that’s funkier than a compost heap on a hot day, Rodgers plays a chordal, rhythmic solo with a right hand busier than a teenage boy’s, and Davis shows off her impressive pipes before they fall back into ‘Family’ and finish it off.

Then it’s Madonna’s turn. Rodgers remembers telling her they should release ‘Material Girl’ first. She told him to kiss her ass, they released ‘Like a Virgin’, and 20 something million copies later, he acknowledges she was right. This is his show though, so they play both of them anyway and then go into Bowie’s ‘Modern Love’ just to casually prove how great they are. Ok, Russell Graham, the keyboard man who takes the vocal, is no Bowie, but who is? He gets the job done perfectly well and then we get perhaps one of Rodgers’ lesser known productions, his and Bernard Edwards’ work with French crowd Shelia and B. Devotion on 1979’s ‘Spacer’. It’s as good as any of his better known tunes and he shows what an amazing guitar player he is again in the middle of it. There’s no break before ‘Soup For One’, during which some of the dancers around me take a bit of a breather lest there’d be a run on stretchers and defibrillators, although Rodgers doesn’t help their cause by throwing in a bit of ‘Lady – Hear Me Tonight’, Modjo’s 2000 Chic-sampling hit.

‘Lost In Music’ could be the theme for the evening and Barnes is so confident in his greatness – and imagine being good enough to fill Bernard Edwards’ shoes – he drops in the odd dissonant note just for a laugh and to see who’s paying attention. Duran Duran’s ‘Notorious’ isn’t the greatest song of all time and it gets a better performance tonight than it warrants, and again listen to the deceptive simplicity of the Rodgers riff at the heart of it, but it’s quickly replaced by the clickitychug of the opening bars of ‘Thinking Of You’ while a video of Rodgers praising Bernard Edwards and dedicating this song that changed their lives to him. The well-oiled machine that is Chic is able to stop on a dime as the stage goes dark for just a split-second in a masterful move that would put even the disciplined troops of Prince and James Brown to shame.

Look at them – Davis, Edwards, Barnes, and Martells – walking around the stage in an impossibly glamorous circle during ‘My Feet Keep Dancing’ – Rodgers’ mother may have said his brains were in his feet, mine always maintained mine were a bit further north and around the back – with Barnes’ bass steady as a very big rock. Gasp as Rodgers gets everyone to take their phones out for a spectacular crowd-driven light show, while he tells us he’s the luckiest man in the world because he’s a two-time cancer survivor and is now cancer free. Could the funk be the cure? Probably.

Rodgers once tried to explain to a journalist what kind of band Chic are. An R&B, Disco, Dance, Funk Soul band was his definition. Sounds about right to me, but this journo – hand in your card whoever you are – didn’t get it so he gets Davis to go full Aretha/Amazing Grace on an intro before ‘Get Lucky’ properly kicks in with a bass drum from Rolle that could direct traffic. Graham gives it a bit of Vocoder/talkbox for the robot bits, and as we’re all busy singing about raising our cups to the stars, the band plough into ‘My Forbidden Lover’ with Rodgers again showing how it doesn’t have to be complicated to be brilliant by offering another guitar riff that beggars belief.

Rolle takes over for Bowie’s ‘Let’s Dance’. He’s no stranger to Dublin – interviewed him once myself, lovely bloke - so he knows the party’s here and he gets us all to make some noise until the ‘maximum funkosity’ meter reads 100%. Good thing he’s got that sideline in making cookies ‘cause he’s going to need some sugar after the effort he’s put in, making us all jump and causing the balcony to shake. The dance floor writhes and undulates like some sort of fully clothed Roman orgy during ‘Le Freak’ and the instrumental middle eight where Rodgers and Barnes get really serious is so funky, we could blast it into space onto some barren planet and the locals would have their own version of Studio 54 open within the week.

Rodgers introduces the band – imagine being accomplished enough to list ‘Chic’ on your C.V. – before Rolle thanks the crew and then doffs his cap to his boss before one last song, ‘Good Times’. They are impossibly good, tighter than a Scottish bank manager, funkier than a cheese and prawn sandwich in a microwave, and groovier than the Grand Canyon. I danced out the door, I danced onto the train, I danced – despite some funny looks – all the way home, I danced in my door, then I put on their records and I danced some more. Chic are marvellous.