Ladies and gentlemen, meet my new favourite band. They're called Rigoberta Bandini, they're from Barcelona and variously manage to sound like the Pet Shop Boys, Peaches, Celine Dion and Pussy Riot. I'll give you a moment to take all that in... One of their songs is a homage to Julio Iglesias, another (‘Fiesta’) borrows shamelessly from the Bee Gees' 'Tragedy' and their biggest hit to date (‘Ay Mamá) sounds like Fatboy Slim having a crack at the Eurovision.

Their two singers are both nudging towards thirty but appear to still be wearing their school skirts while their male bandmates exude a weird sort of computer nerd cool.
Add in some bonkers dancers dressed in white leotards, a Keystone Kops-style chase round the stage and a spot of boob flashing – I averted my gaze, obviously – and I haven't had as much fun at a festival in ages.

The musical knees up in question is Mallorca Live, which traditionally kicks off with the best of what Spain has to offer along with a few big international bands like Editors who sound particularly Editors-y tonight. Which is both a criticism and a compliment.

The musical action each day doesn’t start until six o’clock, which is just as well as earlier it was 35 degrees here in Calviá in Magaluf, which handily has a mile-long beach to wallow on whilst the temperatures soar.

There are five main stages and loads of little ones, a crowd of around 30,000 seriously up-for-it islanders and visitors and a Venezuelan arepa joint down the back serving the Food of the Gods. The Estrella Damn beer is as chilled as the security, and the decommissioned Antiguo Aquapark site being just a ten minute walk back into town seals the deal.

As ecstatically as Rigoberta Bandini are received, they’re mere curtain-raisers for tonight's headliner C. Tangana who thanks to a couple of celebrity romances is as prominent in Spanish tabloids as he is the Spanish charts.

Controversy – planned, I suspect – was also sparked last year when the Madrid superstar filmed a steamy video for ‘Ateo’ in a cathedral. The Bishop, who obviously didn't see the story board beforehand, was appalled and C. Tangana’s sales skyrocketed.

I'm not entirely sure how to describe the 31-year-old's oeuvre – pop rap with reggaeton and traditional flamenco and rumba flourishes, perhaps. Oh, and shit loads of auto-tune, which judging by when it's occasionally switched off he really doesn't need.

Joined by at least twenty other musicians and singers, the grandiose stage set looks a bit like Rick's Café from Casablanca. Sat around – and occasionally standing on – tables with drinks and cigarettes in hand, they proceed to jam out such mega Spanish hits as ‘Ingobernable’ and ‘Tú Me Dejaste De Querer’.

It's supposed to be spontaneous but couldn't be any more choreographed. That said, the musicianship is off the scale with Gipsy Kings-style levels of dazzlement at times.

Day two at Mallorca Live commences with Temples, the Kettering quartet found frozen in a 1970s glacier. From lead singer and guitarist James Bagshaw’s bubble perm to the wingspan of drummer Rens Ottink's shirt, they've got that pre-punk look nailed.

They get extra marks for Bagshaw’s wise-cracks, which include a particularly chortlesome and topical, “I bet you're all looking forward to Christina Ferdinand and their big hit, ‘Genie In The Matinee’.” Whether Ms. Aguilera and the Franz boys and girl are giggling backstage we don’t know.

An hour later, the fabulous gentlemen who’ve come to worship at Christina’s feat roar their approval as the giant video screen asks, “Are you ready to get dirrty?” 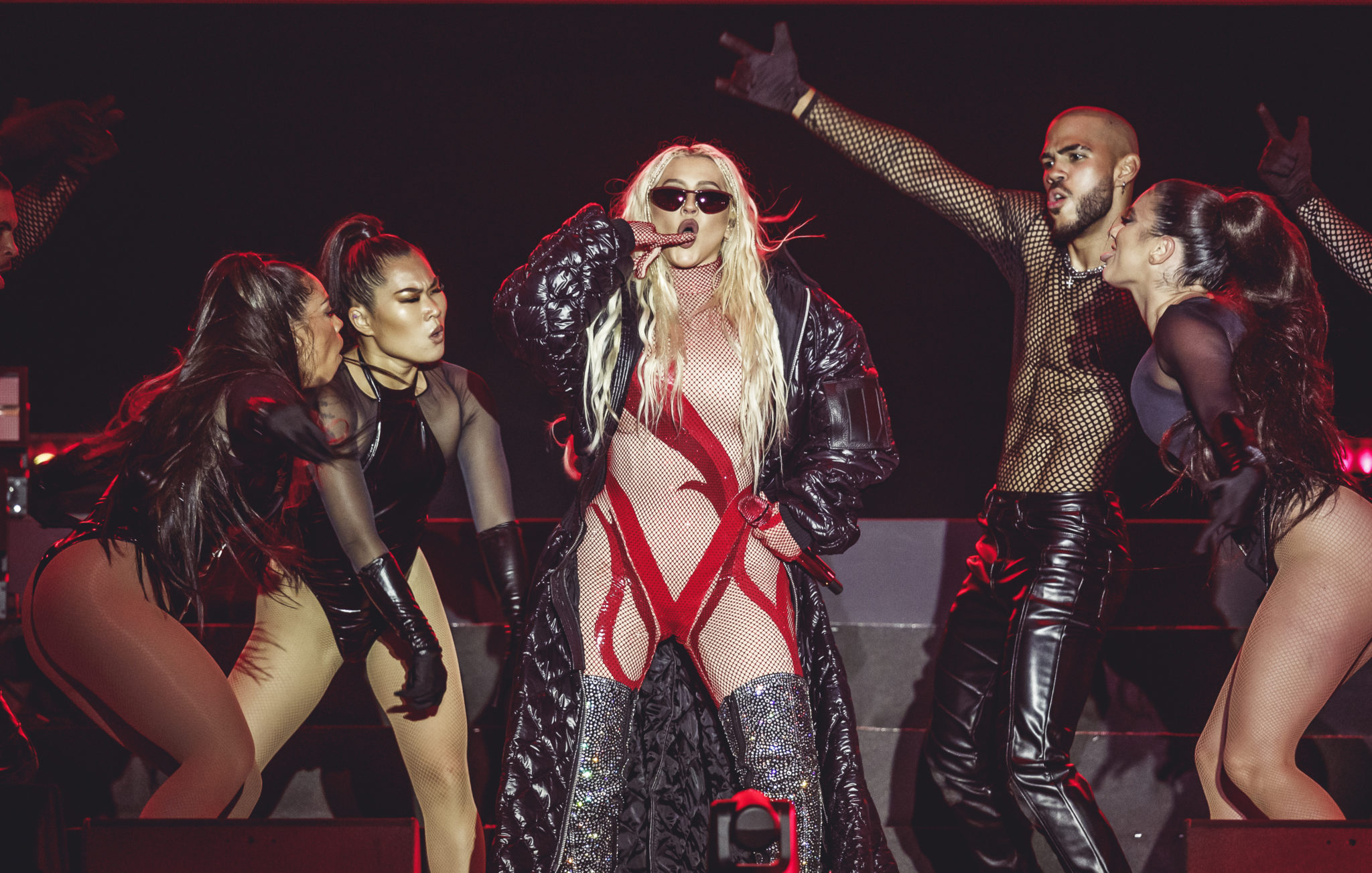 Due to her Latino heritage and Spanish language releases, Aguilera is even more of an LGBTQ+ icon round these parts than Madonna or Gaga.

I'm prepared to give it a go myself, but sadly the show turns out to be a squib of epic dampness. The bump ‘n’ grinding PVC-clad male dancers may have seemed cutting edge and risqué in the ‘80s but are now a yawnsome cliché.

Whatever momentum her and her band manage to build up is immediately destroyed by the between songs video inserts of a young Christina doing her ‘90s/noughties thing. If it were to facilitate costume changes, fair-ish enough, but the same fishnet bodystocking and thigh-length silver sequinned boots combo is sported throughout.

The bombast at times is of heavy metal proportions, with the dry ice machines and confetti canons getting barely a moment’s rest.

You’d expect chart-toppers like ‘Bionic’ and ‘Genie In A Bottle’ to be belted out with gusto, but the performances are mechanical and fail to deliver the promised dirrtyness.

The show is heading for car crash territory when, with a theatrical wave of a red Moulin Rouge-style fan, Aguilera launches into a version of 'Lady Marmalade' that's as wickedly funky as it ought to be. Even better is to come as the dancers and the band finally take a breather and Christina, with that full four-octave range of hers, delivers an exquisite, almost a capella 'Beautiful'.

A classic case of less being more, it makes you wonder how good she might have been minus the everything including the kitchen sink production.

"Be proud of who you are, always!" Aguilera says as she exits to applause, which isn't nearly as thunderous as it should be.

No such complaints can be aimed at Franz Ferdinand with a bequiffed Alex Kapranos scissor-kicking as if his life depended on it, and the new members of the band clearly buzzing to be on such a big stage.

Baggy and Britpop may have aged badly, but FF's angular art school rock still manages to thrill with 'The Dark Of The Matinee', 'Michael' and 'Take Me Out' sounding like they could have been recorded by some hip young things yesterday. Last year's glamtastic ‘Billy Goodbye’ is proof that these hip middle-aged things are looking to the future as well as the past, with Kapranos delighted by the frenzied mosh pit reaction it provokes. 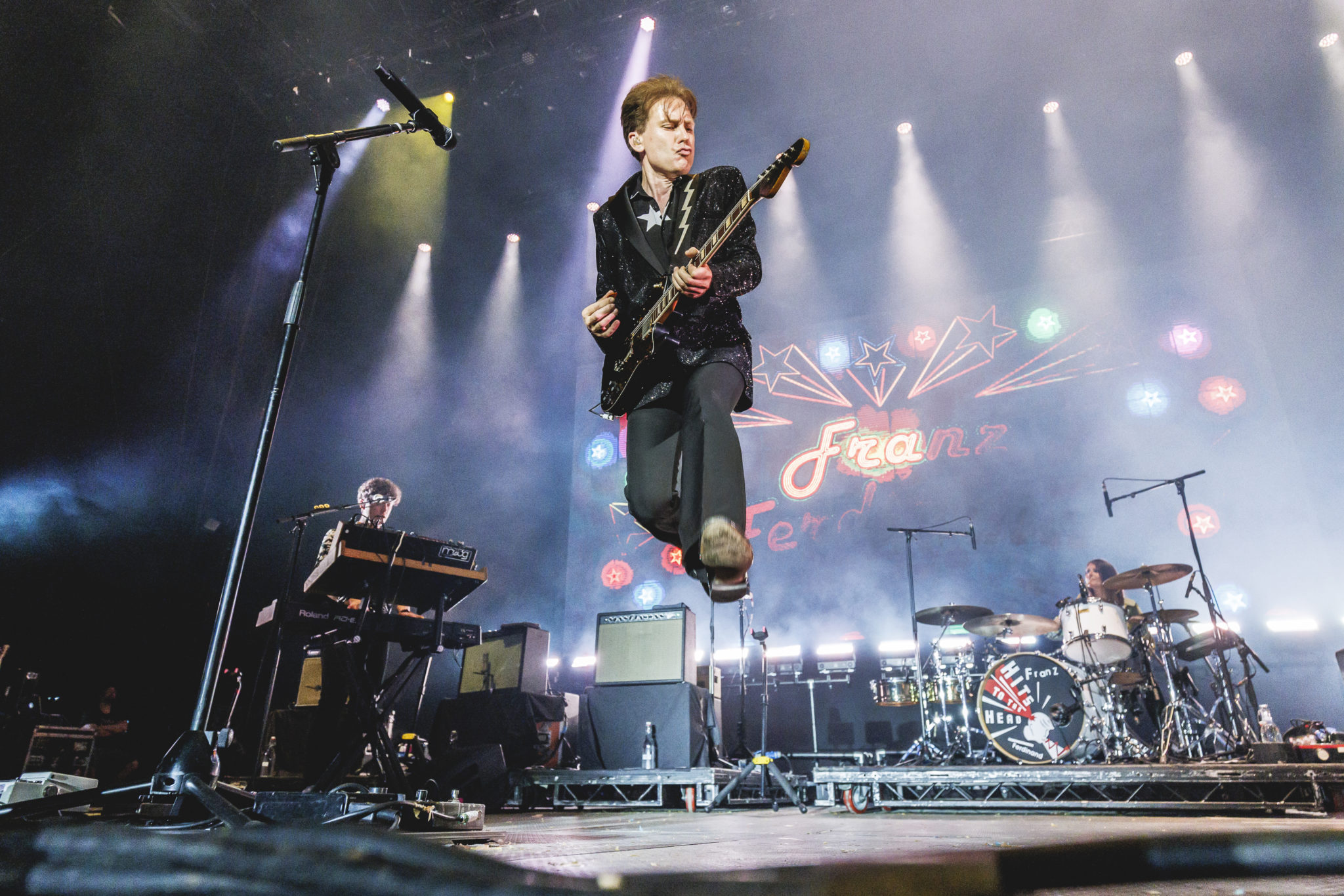 Also showing no signs of atrophying are a fresh in from Glastonbury Supergrass who start with a rowdy as fuck 'Caught By The Fuzz', follow it with an equally muscular 'Mansize Rooster' and don't let up until thirteen songs later when 'Pumping Up The Stereo' has the shit kicked out of it.

The last time I saw Muse was way back in May 2000 in the Temple Bar Music Centre. It’s fair to say that Messrs. Bellamy, Wolstenholme and Howard have somewhat gained in stature since then.

Warming the indie kids up for them are fellow Devonians Metronomy who also share their taste for sonic experimentation.

All close harmony Californian West Coast pop one moment and dirty slap bass punk-funk the next, they refuse to be pigeon-holed with Joseph Mount & Co. also treating us to some Nirvana-like grunge, ZZ Top-esque boogie and a couple of widescreen epics that Win Butler would be proud to have penned.

They make it all seem effortless, which of course it’s not, and end on the instrumental high of the post-punky ‘You Could Easily Have Me’, which builds and builds and then builds some more. 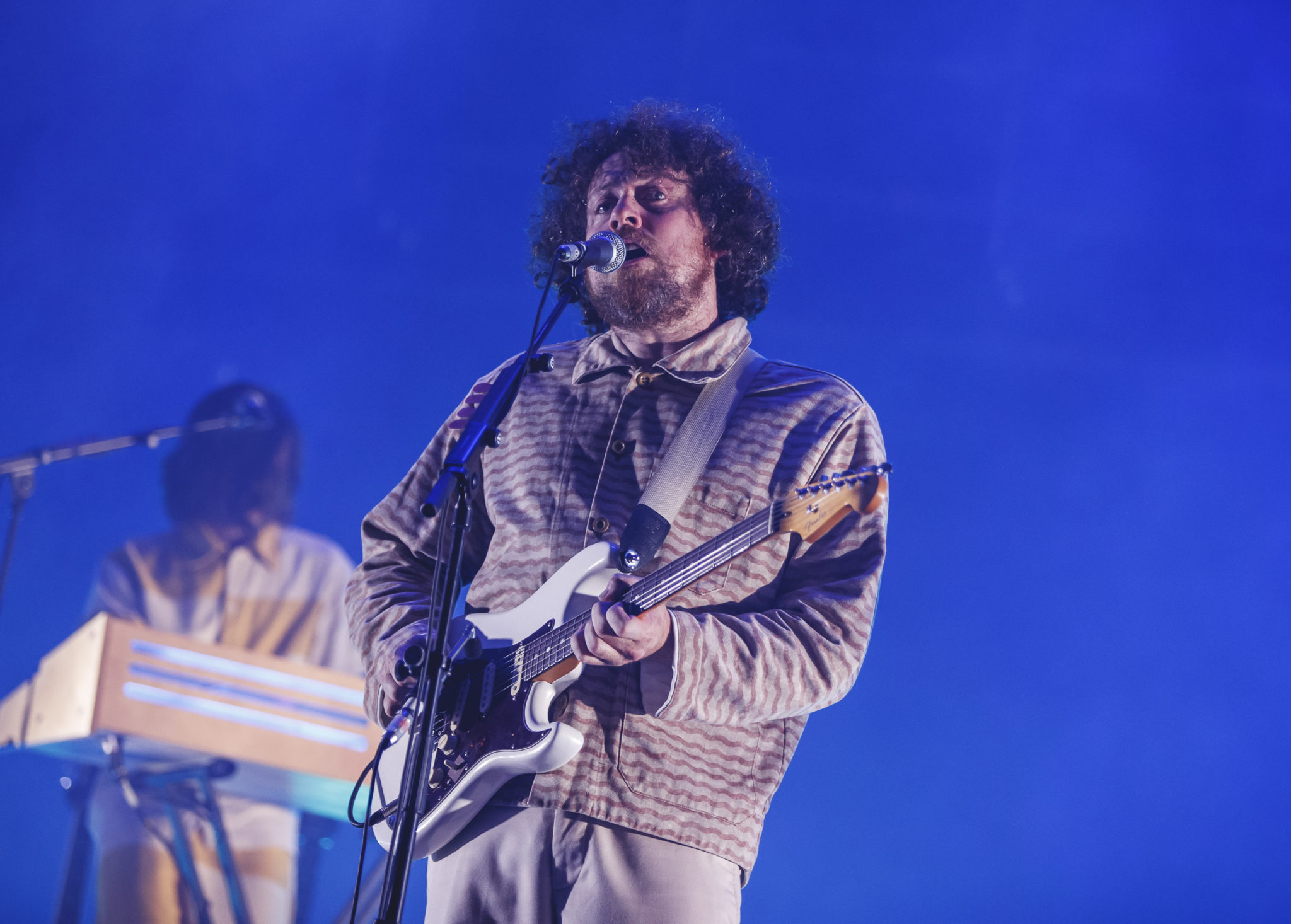 It's just after twelve-thirty when the big screens show Muse’s Mt. Rushmore-style carved heads being torn down by metal mask wearing revolutionaries from a dystopian future.
The masks are a recurring theme with the trio donning them for the opening ‘Will Of The People’ and a giant revolving one appearing not long after that.

Front-row eyebrows are singed when a towering ‘WOTP’ sign bursts into flames. God knows what the local health & safety officer makes of it all.

Matt Bellamy is his usual whirling dervish self as they then tear through ‘Hysteria’, 'Psycho' and ‘Pressure’ in quick succession.

Will Of The People – out on August 26, kids – newbies like ‘Won’t Stand Down’ and ‘Compliance’ are greeted with the same rabid fervour as ‘Supermassive Black Hole’, ‘Plug In Baby’ and ‘Uprising’, and the double-whammy encore of ‘Kill Or Be Killed’ and ‘Knights Of Cydonia’.

Meanwhile, a wall of industrial flamethrowers, fluorescent streamers shot into the crowd and Matt Bellamy’s donning of an LED-studded leather jacket add to the spectacle.

For all of the show's largesse, Muse still manage to create an intimacy between themselves and the crowd, which is what all great stadium acts do.

If rumours of them headlining next year at Slane turn out to true, you’re in for a sensory-overloading treat.

As for Mallorca Live, I'll be back...