Julia Jacklin cast aside her nerves to put on an emotionally charged performance that made for a great first night of tour.

Aussie singer-songwriter Julia Jacklin kicked off the EU leg of her PRE PLEASURE tour last night at Dublin's Vicar Street with impressive support from Erin Rae. The 32-year-old delivered a gut-wrenching and heartwarmingly beautiful performance. Her raw lyricism and angelic voice cut even deeper in her live form, where she shows off her magical talent while somehow remaining humble and personable.

Nashville's Erin Rae kicked off the evening with her lovely folk-pop sound. She is fresh off her latest album release, Lighten Up. 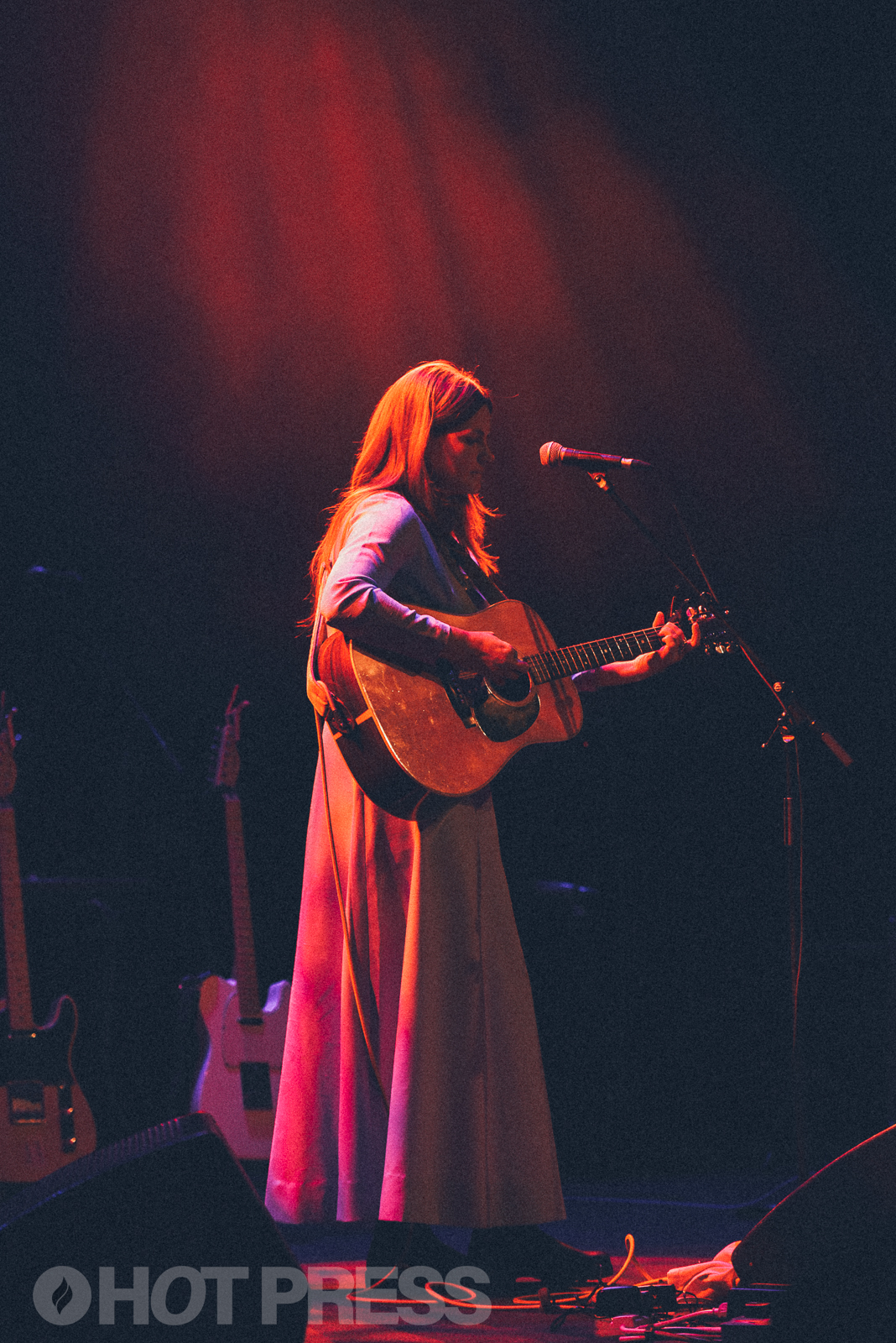 Entering the stage gracefully to 'My Heart Will Go On' by Céline Dion, Jacklin sported a red suit-skirt set and mary jane shoes (which she had just bought that day from Clarks). She began with the titular track of her 2016 debut album, Don't Let The Kids Win: a touching acoustic guitar ballad. Her nerves were apparent, as she had to stop and restart the song. The crowd was more than happy to help her out by singing along to all of the words. 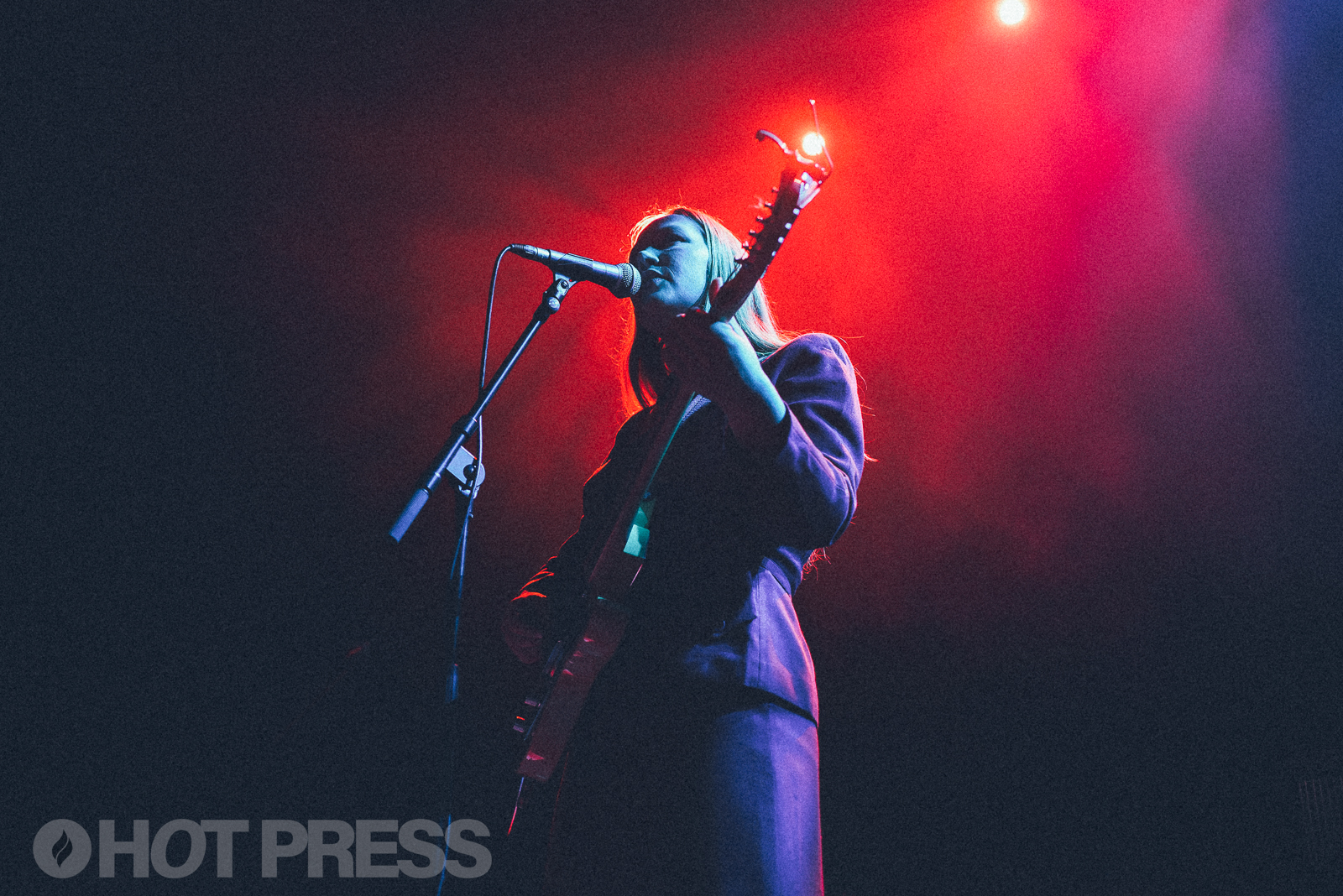 "I'm a bit nervous, this is our first night... not ever, just on this leg of the tour," Jacklin clarified. She seemed to find her footing as her band joined the stage for the next song 'Be Careful With Yourself' from recent album PRE PLEASURE. This song cleverly deals with the relationship between love and imminent loss, as she tells her lover to stop smoking and drive slower so they can have a future together.

Returning to her debut album, Jacklin played 'Pool Party', which finishes with a hefty guitar solo. "I feel like I always stick to my word. But I've been saying this for about five years now, that eventually at the end of a tour I'm gonna do the 'Pool Party' solo. I remembered just then, oh you were supposed to spend the three weeks off practicing...but I didn't," she said. "I know you guys probably think, 'Wow, Julia's an incredible guitar player, but I'm actually not that good," she insisted. 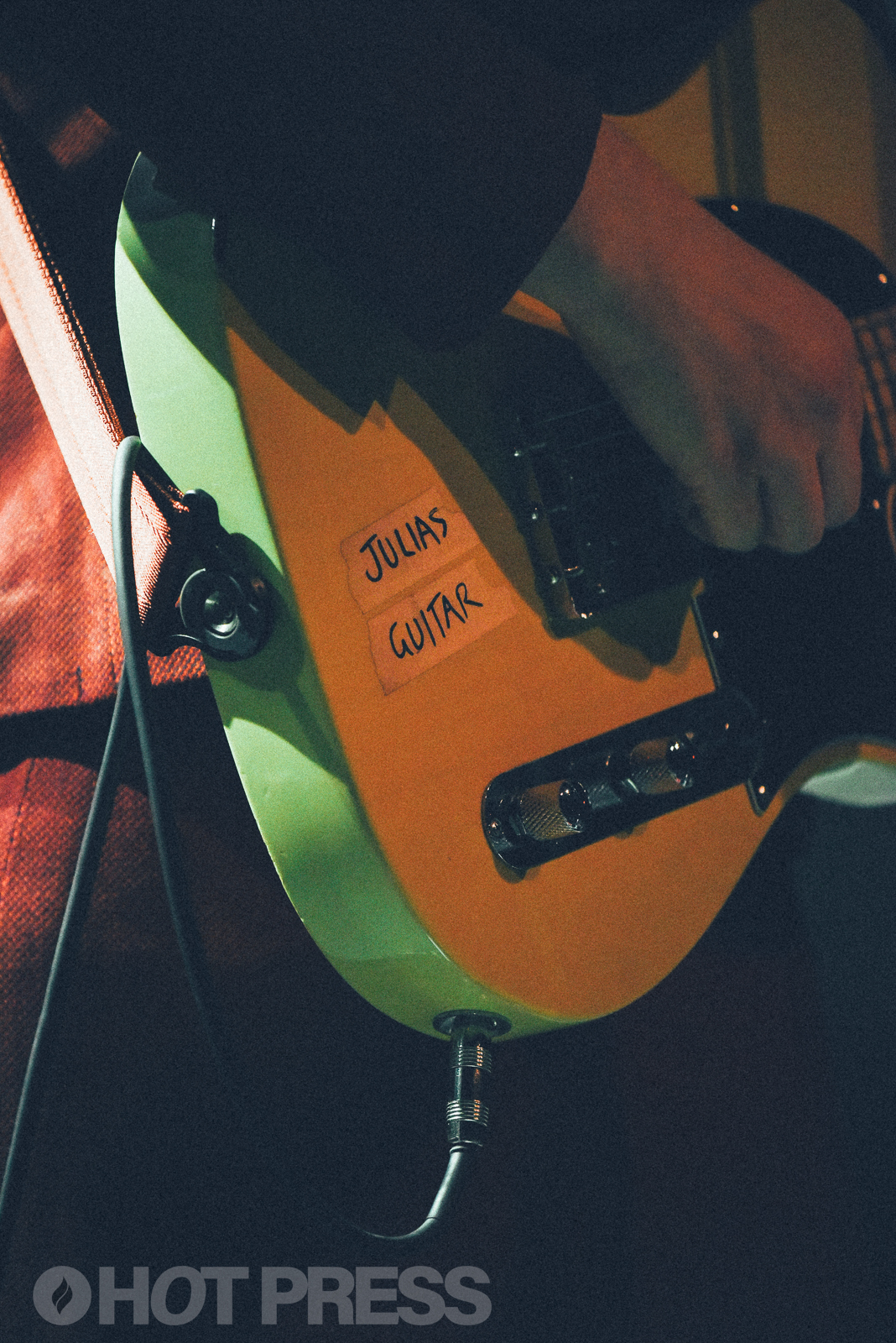 The musician masterfully transitioned from joking with the crowd, into arguably one of the saddest songs to exist: 'Good Guy' from her sophomore album Crushing. "Tell me I'm the love of your life just for the night/ even if you don't mean it," she sings, simultaneously breaking the hearts of everyone in Vicar Street.

Lifting spirits back up a bit was 'Moviegoer'- a track from the new album which tackles art as escapism, and the value of human connection. It's fit with full instrumentals and an encouraging line "If you can say it to a stranger/ you can call your sister later," which everyone yelled together. 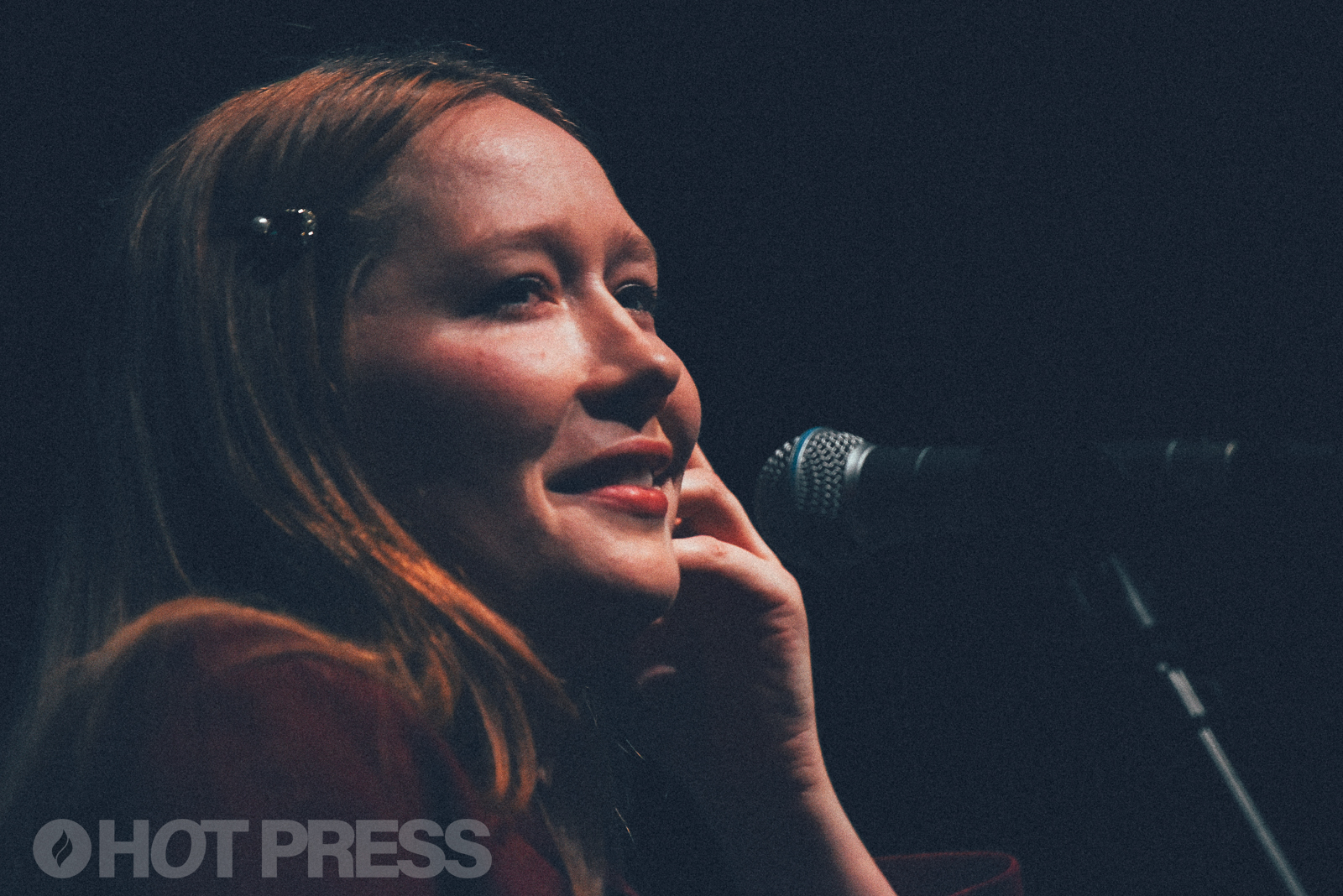 She then introduced 'Lydia Wears A Cross', explaining, "This song's about religion and childhood." PRE PLEASURE famously tackles the contradictions Jacklin felt as a child raised in Catholic school who attended mass every week. In this song she questions her faith and the ceremonial aspect of religion, singing "I'd be a believer/ if it was all just song and dance/ I'd be a believer/ If I thought we had a chance." The song flows perfectly into 'Tenderness', which more specifically deals with repressed sexuality under religion, and the damage that comes with certain sexual encounters with a power imbalance. Jacklin ceremoniously brushes the chimes, which was a big crowd pleaser.

She introduced her wonderful band, made up of bassist Mimi Gilbert, drummer Laurie Torres, guitarist Will Kidman, and guitarist/keys Jennifer Aslett. They all mesh together wonderfully, and the passion is palpable. The group recently performed a session together live on KEXP. 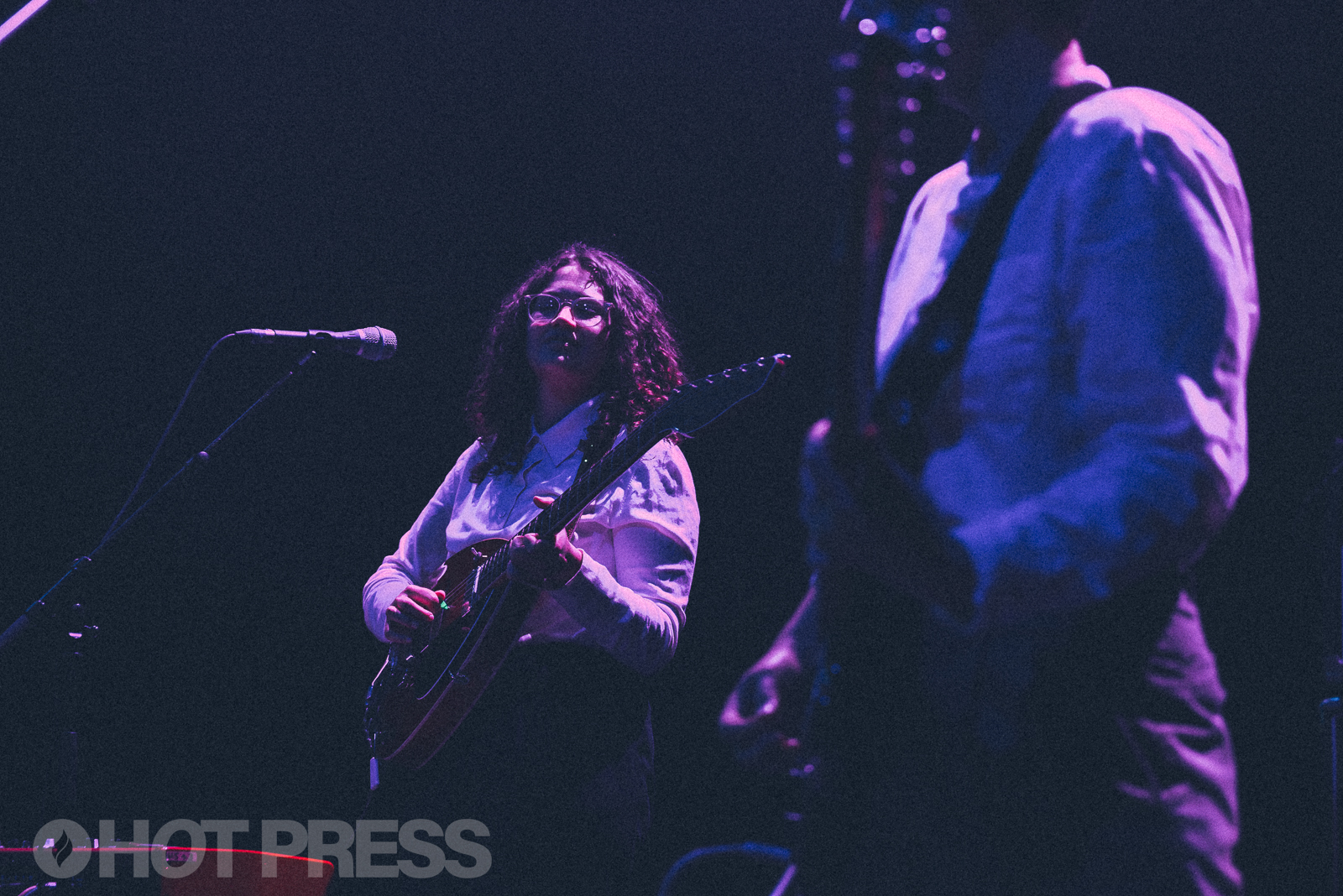 Back to the heartbreaking beauty that is Crushing: "This is a breakup song," Jacklin says before diving right into 'Don't Know How to Keep Loving You'. The whole crowd swayed together in sync as Jacklin stared straight up at the ceiling. 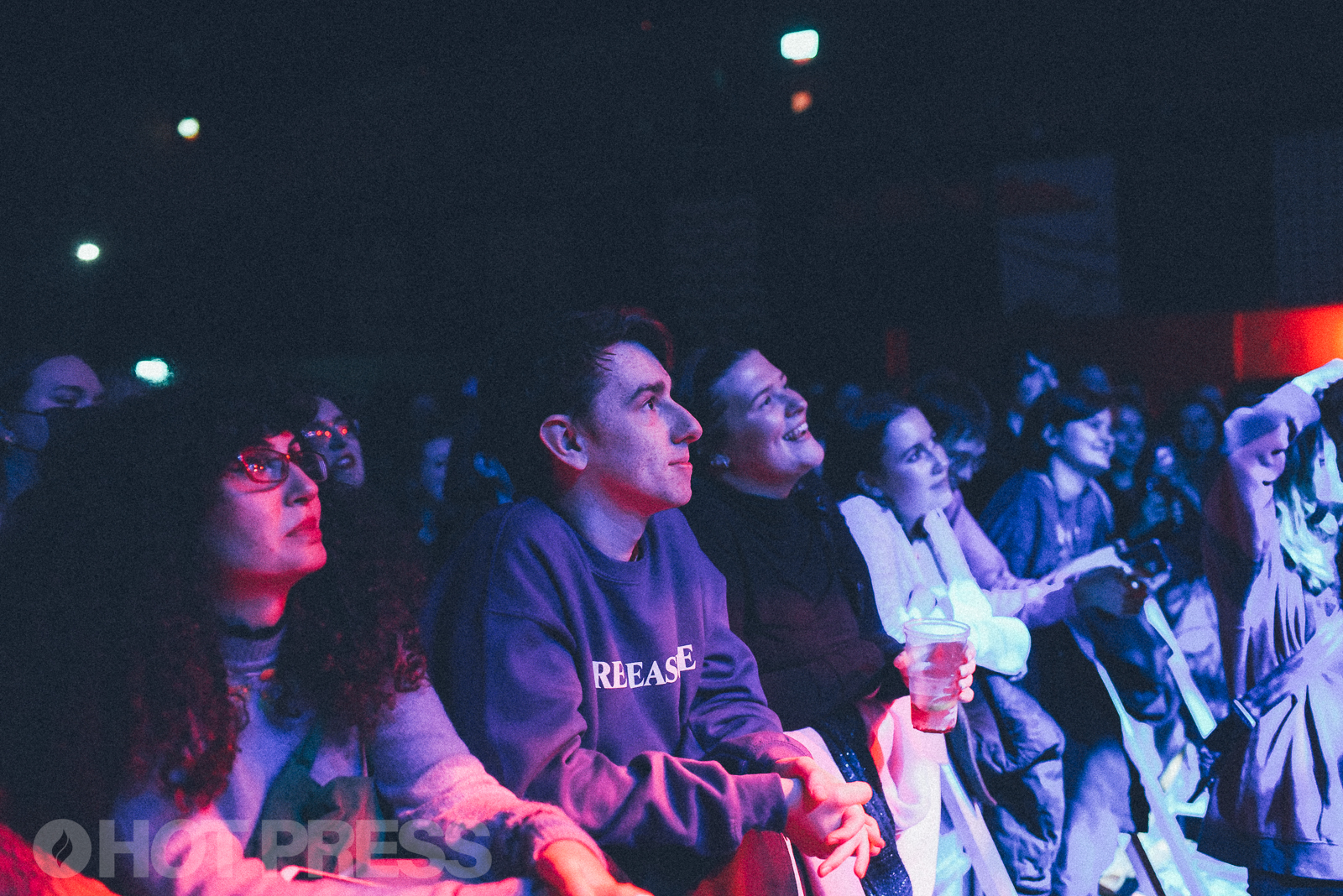 When she discovered someone in the crowd shared her middle name Margaret, she said, "I hated it when I was a kid. What's wrong with Margaret? It's not that great..." The audience shocked her by chanting, "Margaret! Margaret! Margaret!" "Thank you, that's never happened before," she replied.

Next she warned everyone, "Hold on to your hats" for rock song 'I Was Neon'. 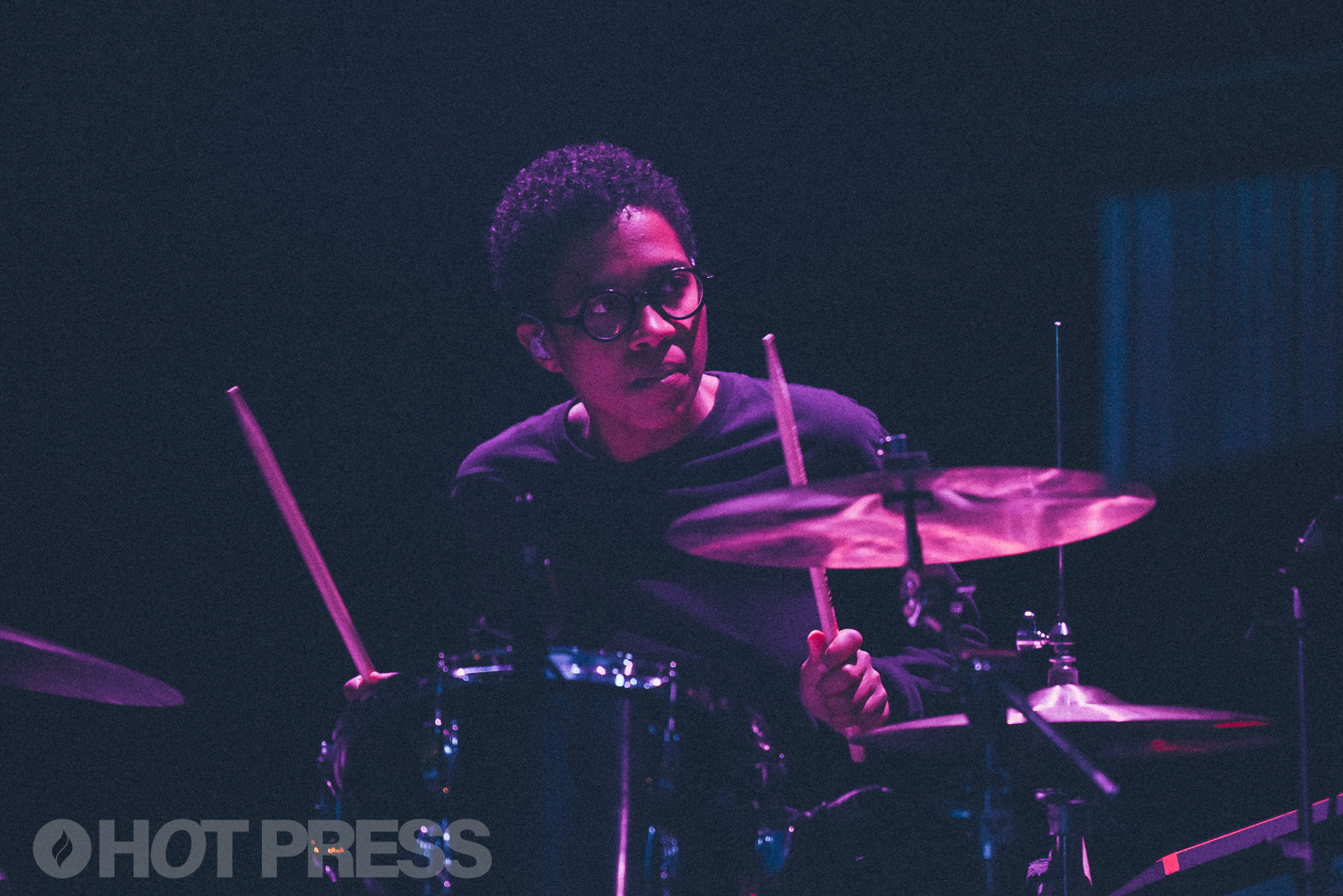 "We are going to play two more songs, then pause for a moment and play another one, and then you can all go home to bed," she said. The next two songs were 'Head Alone' and 'Pressure to Party'- the latter of which is a classic as one of the only dance tracks on Crushing.

Jacklin and the band stayed on stage to chant with the audience, "Encore! Encore! Encore!" "Thanks, we will play an encore!" she joked. She left us with a "deep cut" from her first record called 'Hay Plain'. This ended the show full circle with another acoustic guitar ballad from Don't Let The Kids Win.

This night made for a rollercoaster of emotions, and a magical start to the EU leg of the PRE PLEASURE tour. Hopefully by the time she makes it to Lisbon, she'll be able to play the 'Pool Party' solo.