The weather may have been less than perfect, but on the opening day of Longitude 2022, the music made up for it, with outstanding performances by Khakikid, Aby Coulibaly, Mabel, Aitch and Dave leading the charge in powerful style...

KhakiKid, 49th & Main, Aby Coulibaly, Baby Keem, Mabel, Aitch and many more musicians delivered a series of superb shows before British rapper Dave brought the day to a close with a bang as fans braved a torrential downpour.

In many ways, KhakiKid was the ideal candidate to kick off the highly-anticipated Longitude weekend festivities. The Dublin-based alt-rap newcomer – aka Abdu Huss – looked like he was perfectly at home on the Heineken stage during an explosive set which also featured fellow Irish musicians Sexy Tadgh and Bricknasty.

His 2020 single, ‘Late’, was a live highlight, the audience joining in, with full-blooded enthusiasm. This, we can safely say, is proper soul music.

Elsewhere, his approach is an impressive blend of hyper-rap and smooth nu-jazz. Taking a drag of his elf bar, he moved into ‘Woodstock’, a favoured track from his much-awaited upcoming EP Elevator Music – out later this month, fact fiends. The sax-rich number inspired a bravura bout of mass-dancing. As reported yesterday here, a brilliantly chaotic stab at ‘STFU’ – a two-minute nugget which was released in March of 2021 and featured TrippyThaKid – on this occasion saw KhakiKid getting down with the crowd. Absolute Longitude mayhem ensued.

People arrived in the Main Stage area, donning bucket hats and plastic ponchos, in preparation for a wet phase. Never mind. The rain had no impact on the crowd’s sense of anticipation as Irish R&B sensation Aby Coulibaly got ready backstage. Continuing from her much buzzed-about Sea Sessions live performance last week, she opened her Longitude set with a pared back, rhythmic track ‘Chamomile Tea’, all the while exuding an unmatched level of natural magnetism.

The Hot Press 'Hot For 2022' singer’s next song ‘I’ll Be Damned’ tackles the experience of being cheated on. "I hope no one can relate to this but if you can, I want you to dance with me," Aby said – who, you might ask, was going to refuse that invitation? Not that she was about to pull any metaphorical punches. "Your friends are ugly and so are you," she sang, earning a hearty laugh from the crowd. Next, Coulibaly treated us to a preview of her next release ‘Rewind’, a slower, more emotionally-charged track with her powerful, crystal clear vocals at the forefront, accompanied by a slow beat and bolstered by saxophone and guitar melodies. 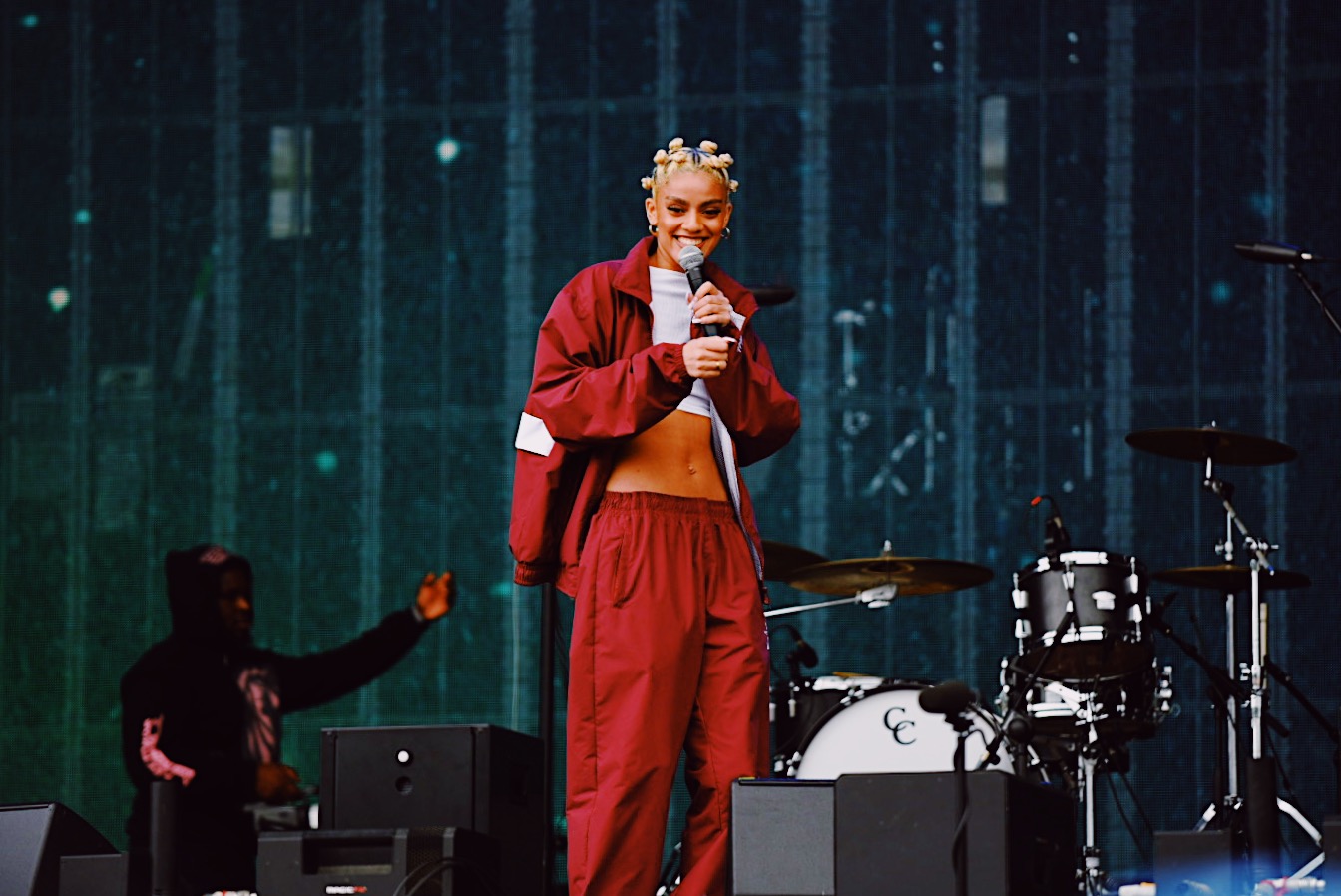 The singer's Dublin accent seeps through the chorus of her successful 2020 debut single ‘Taurus’ which to date has garnered over 2 million streams on Spotify. As bubbles floated in the air and people began to climb onto each other's shoulders, the effortlessly cool performance came to an end with a skilled, laidback freestyle. A new Longitude star is born...

Hailing from South Kilburn, Knucks was determined to bring an element of pure chaos to the Heineken stage – and he succeeded in some style! The crowd was in full voice, their chants becoming reminiscent of a singalong at a football match. The mayhem inside the intimate tent was brought to new heights until Knucks – a serious live phenomenon – took a hand in smoothing out the wrinkles. "You’ll ruin it for everyone,” he told some over-enthusiastic crowd members, before continuing the set in a high-energy style. The hit ‘7 Days’ resulted in a major eruption of leaping and dancing, with one line in particular resonating. “New ting out of Casa Amor," he intoned, "the game is the game/ why you mad at me for." With Love Island’s Casa Amor in full swing the night before, it seemed perfectly fitting. 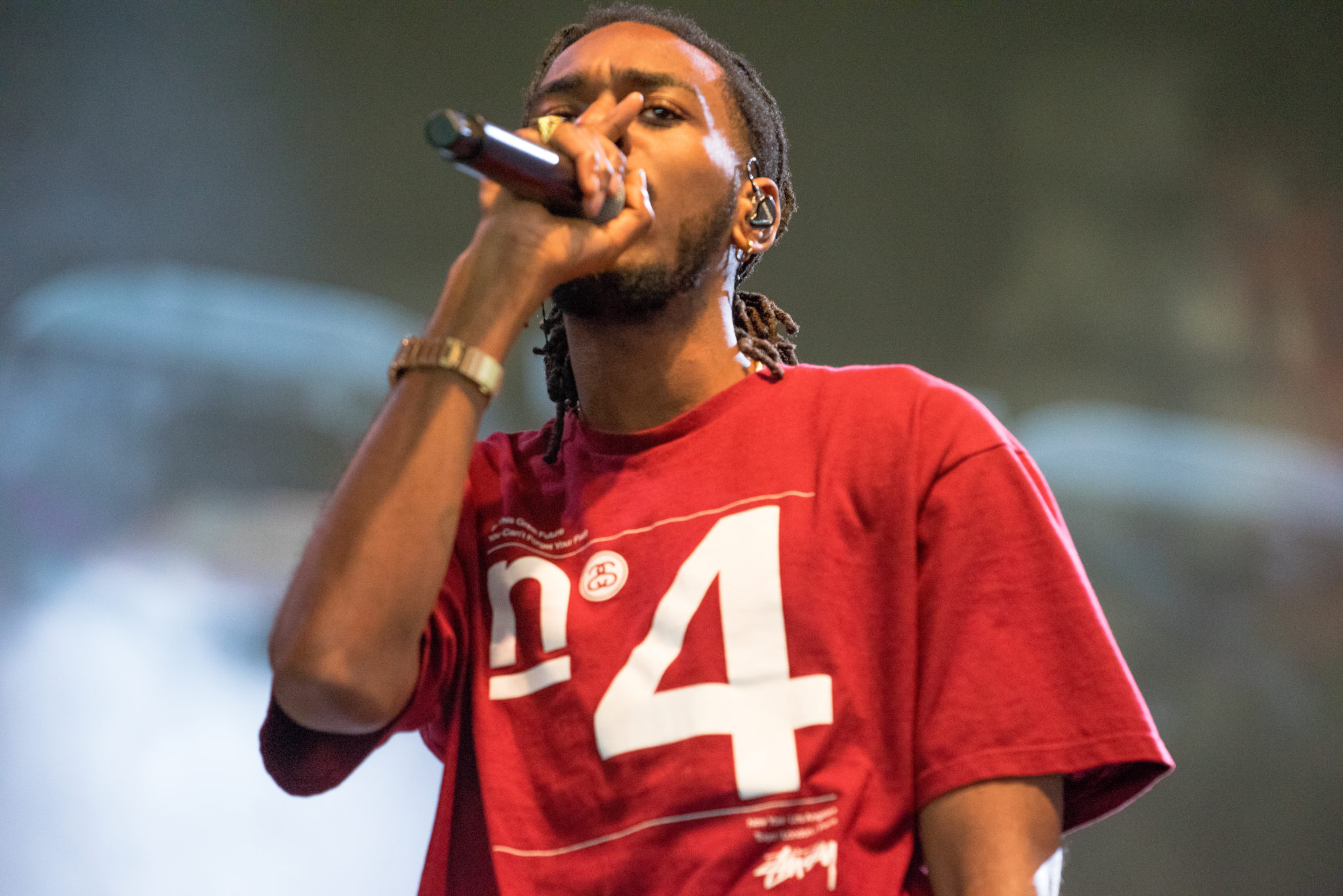 Fans ran excitedly towards the main stage as the opening notes of platinum artist Mabel's 'Boyfriend' punctured the Marlay Park air. An explosive start to the star's allocated 45-minute set proved that she could have easily taken on the role of headline act, the singer's smooth, buttery vocals circling above the track's hypnotic beat.

Supported by a troupe of phenomenal backing dancers dressed in blue, Mabel's high-intensity set had the crowd on their feet and singing along to popular favourites 'Mad Love', from the performer's debut 2019 studio album High Expectations, ‘Ring Ring’ and iconic dance track ‘Don’t Call me Up’.

Following on from Mabel’s dazzling live set, Baby Keem took to the Longitude main stage in an ensemble that can accurately be summarised as something from Men in Black. Hyping the crowd up to maximum levels, he shouted: “Make some motherfucking noise for yourselves.”

With a handful of guest appearances and production credits across the biggest album of the year, at just 21 years of age, the Grammy Award-winning Las Vegas artist has climbed rapidly to the upper echelons of the rap world. With ‘vent’ constantly trending on TikTok, you can imagine how well-received the iconic track was when he got round to performing it live. Bidding the sated crowd adieu, he left with a humble: “Until next time, I love you.”

Irish indie-pop duo 49th & Main were lining up for duty on a cosy Heineken stage. The lads immediately grabbed the crowd's attention, hitting the stage accompanied by pink and blue faded lights, before hyping the audience with a remix of Dua Lipa’s ‘One Kiss’ and Kungs and Cookin’ on 3 Burners’ ‘This Girl’. 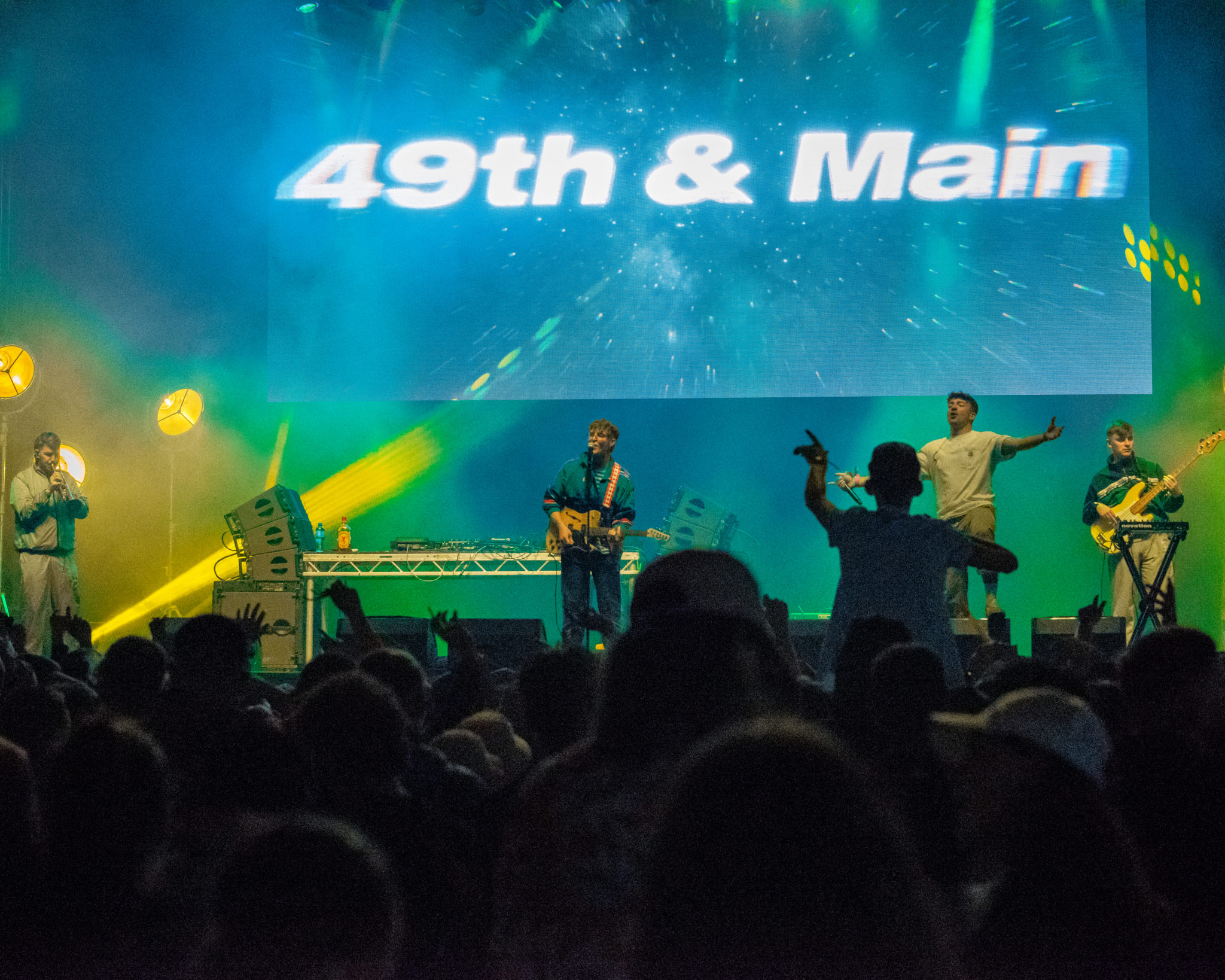 'She left me at the WATERPARK' – their styling – was the perfect step into summer, despite the gloomy clouds that were hanging around over Marlay Park. ‘Good Life’ also made for an exceptionally uplifting contrast to the typical Irish weather. Accompanied by touches of trumpet throughout, and a sensual guitar solo, this was an excellent performance. 49th & Main are an exciting proposition live.

The sound of shattering glass reverberated throughout the venue as ultimate hype man Aitch prepared to make his way on stage. A mash-up of Stormzy’s ‘Big For Your Boots’ and Mo Bamba’s ‘Sheck Wes’ had the Longitude crowd going crazy in recognition, as the British grime artist emerged amid a sea of fog and flashing stage lights. 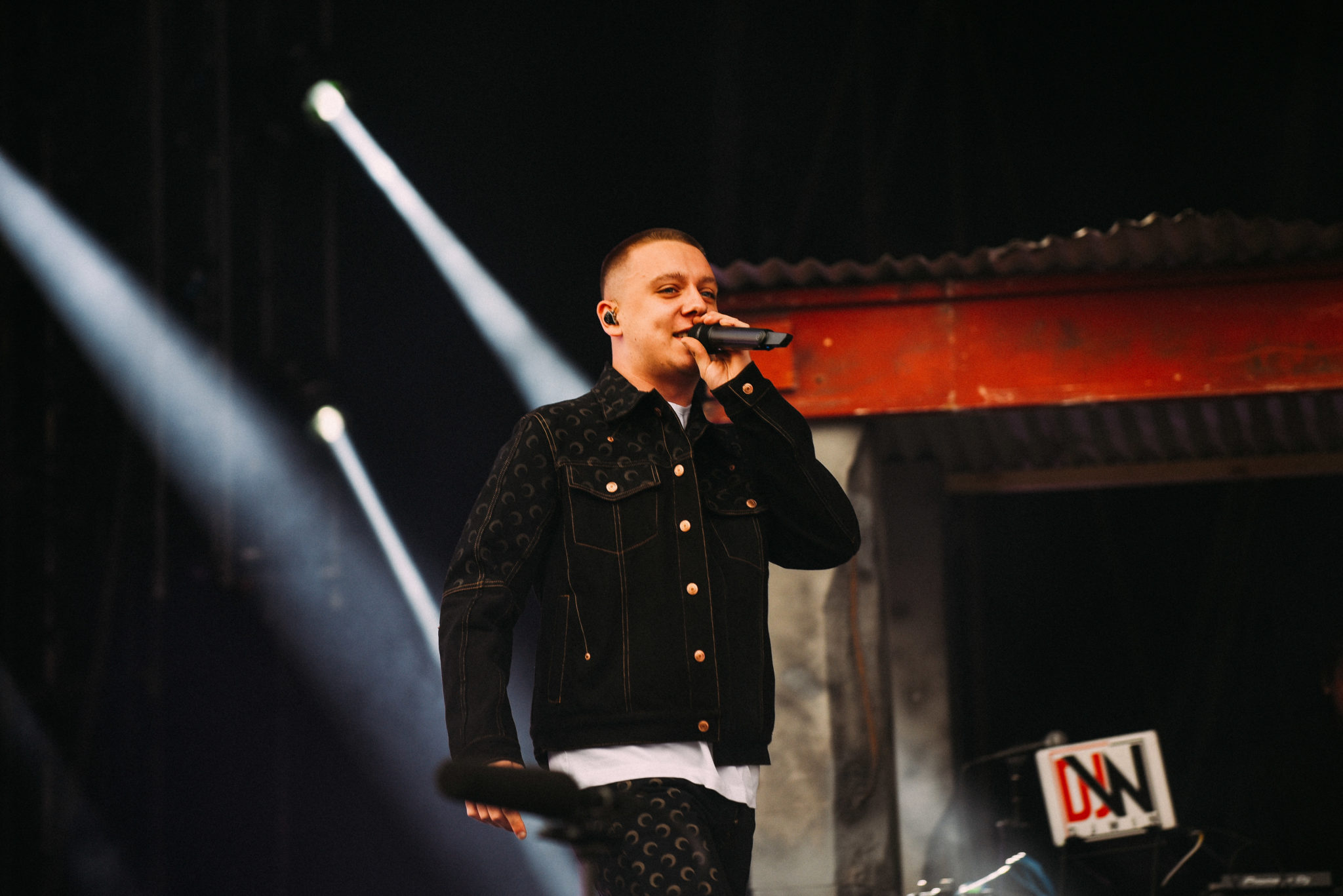 Launching into his first explosive track ‘What’s Next’, it was mosh pits a-go-go as the fans went positively wild. The fiery, siren sound-effects and pyrotechnic-filled set powered ahead with the wildly popular ‘Buss Down’ off his 2019 EP AitcH2O. "Where all the fucking mandem at?" he asked and hands were in the air as a roar of support erupted from the audience.

Bringing a day of powerful night of live music and brilliant hip hop to an epic close, acclaimed British rapper Dave took to the Main Stage. 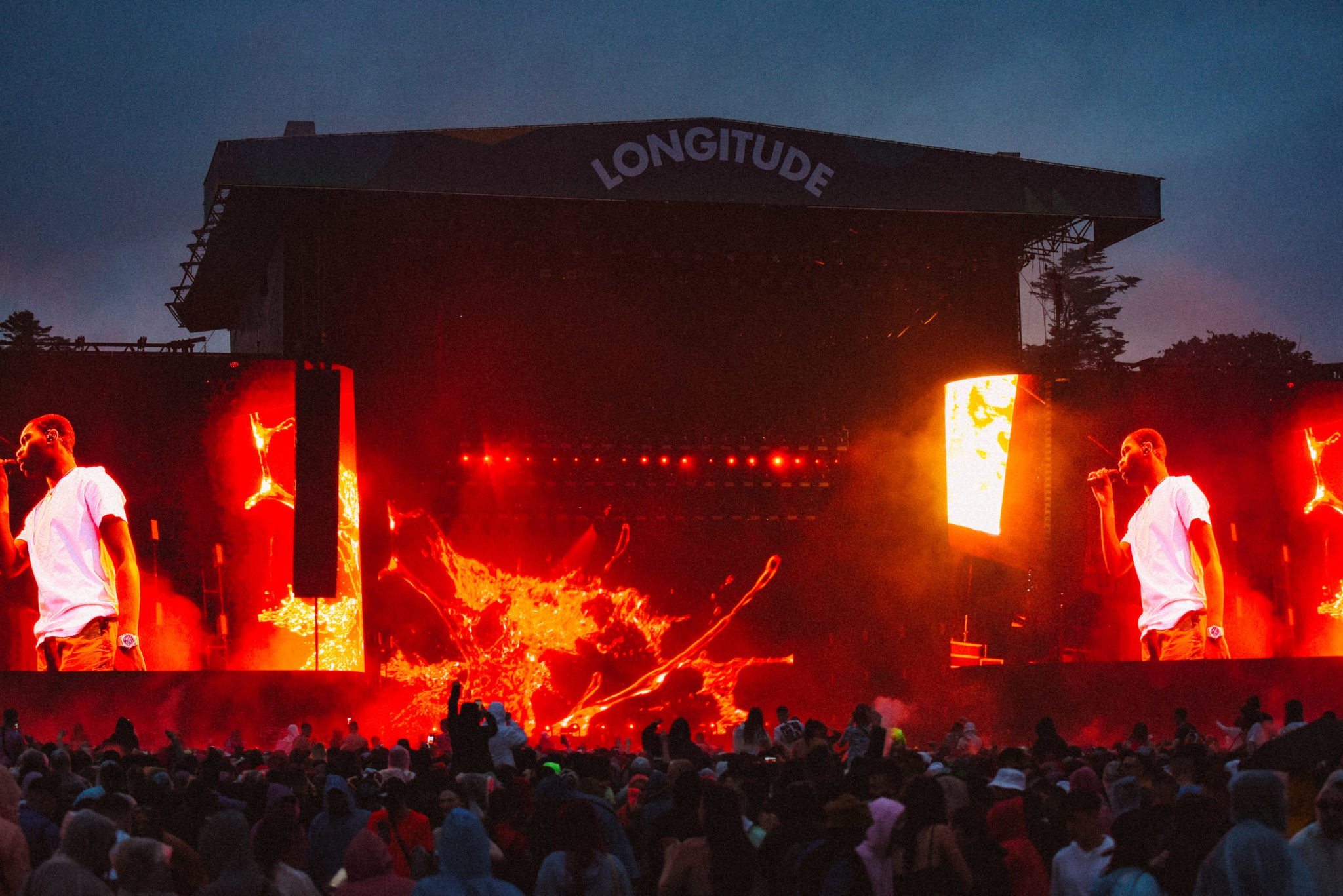 With his smooth, refined vocal power, the multi-talented 24-year-old artist sent the crowd into a frenzy with iconic bass-laden tracks ‘Professor X’ and ‘Verdansk’ off his 2021 sophomore album We’re All Alone In This Together. A special addition to today's live set was a cover of ‘Thank You’ by Dido – the first song the Brit Award winner had learned to play on guitar. In a moment which warmed the hearts of those undeterred by the torrential downpour, Dave brought his mum on stage, and the entire crowd sang ‘Happy Birthday’ to her.

An explosive set, metaphorically and literally, came to an end as fireworks went off and Dave announced "Ireland I am Home." Wet as we may have been, it felt like that for the audience in Marlay Park too on the opening day of the live feast that is Longitude 2022...