A Gilla Band gig is always one for the ages, discussed in glowing tones like a core memory that changes how you view live music.

Heralded since their inception as a "live act", having to perform tunes from their incredible third album Most Normal, which landed earlier this year, presumably led to a tough few rehearsal sessions. The noise created on the sprawling long-player is mysterious, frenetic, strange but all-consuming; but how could they recreate the sounds? I don't have the answers, but the results at Dublin's National Stadium were spine-tingling last Friday (December 9).

But first, their special guests M(h)aol warmed up the crowd in the only way they know how: quirky outfits, self-deprecating humour about gender and sex, belting spoken word iterations that pull exactly zero punches and a bit of theatrical contemporary dance. 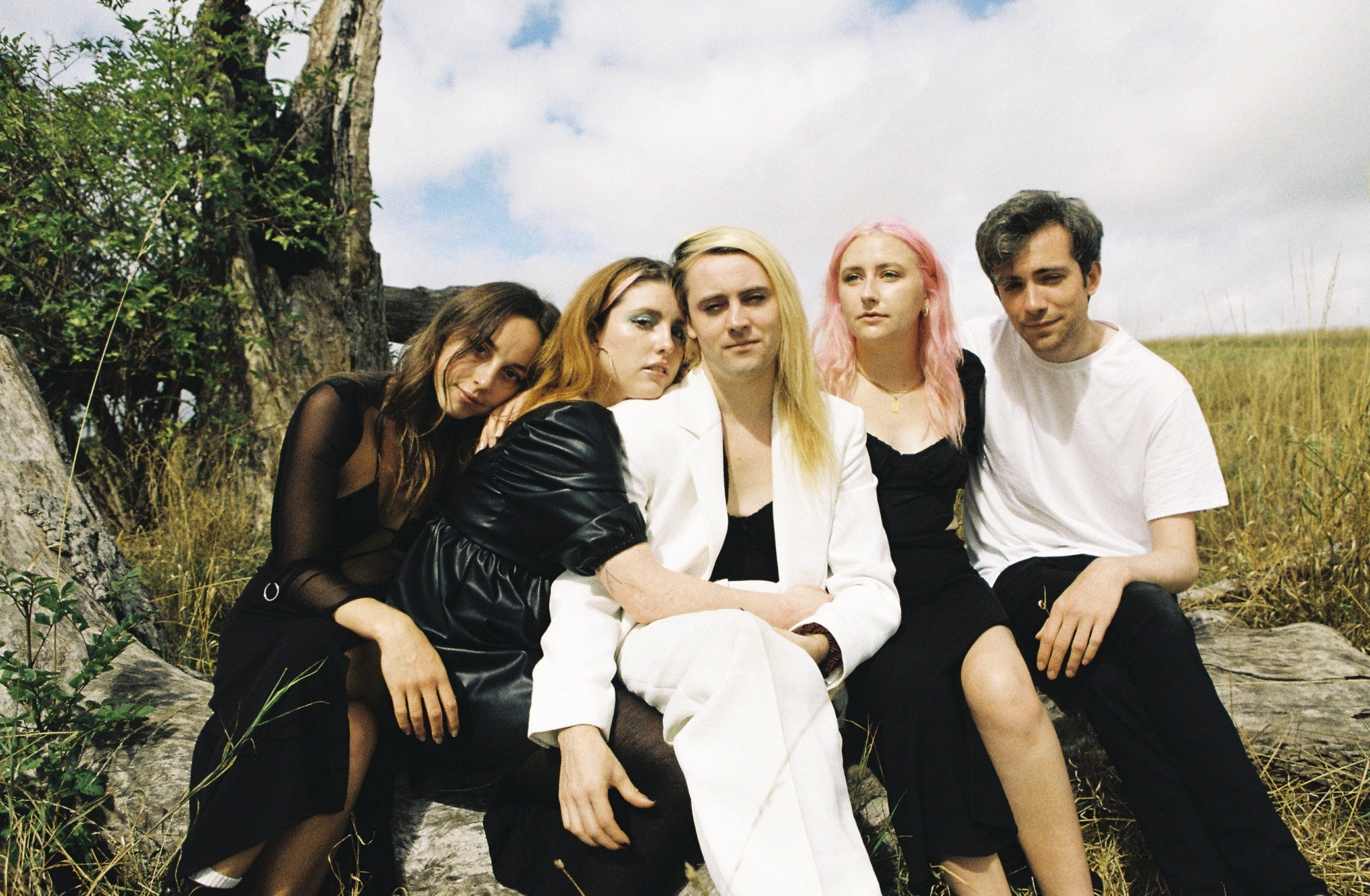 The rising five-piece emerged wearing drummer Connie Keane's silk boxing outfits, which the Fears electronic act crafted in 24 hours and enlisted the help of her family and even their French student. The band opened with a haunting cover of 'Óró Sé do Bheatha 'Bhaile' - as suggested brilliantly by Nic Ghearailt's presumably very cool dad.

Róisín's electric, freeing stage presence brought the crowds in from the (insanely brightly lit) bar into the boxing stadium floor, as she rounded up those on the sides to shout the words back to her with unchecked charisma. Visceral tracks like 'Bored of Men', 'No One Ever Talks To Us', 'Attachment Styles' and 'Period Sex', the closer on their forthcoming debut album, pelted the crowd.

'Period Sex' was a highlight, complete with breathy moaning and Nic Ghearailt declaring afterwards: "If that made you uncomfortable, maybe ask yourself why". Looking around at the predominantly male-identifying crowd, it definitely made some of them squirm but in the best possible way. Fair play.

Praising the help of therapy on 'Attachment Styles', which dives into trauma with incredible honesty and empathy, the frontperson explains Bessel van der Kolk's study in The Body Keeps The Score on how collective chanting or singing aides social synchronisation, which is thrown off kilter when someone experiences a traumatic event. Screaming "I'M SO BORED [of talking about men]" repeatedly back to Nic Ghearailt, it's easy to see why.

It also marked Róisín's final M(h)aol gig of the year after joining the band on part of their European jaunt with Gilla Band. Paris gave the best crowd response, apparently. It builds up the anticipation for the act's debut album Attachment Styles, which lands on February 3rd 2023 via TULLE Collective.

Oh, and don't forget to buy M(h)aol merch and cards for Greenway's cat Copper, or "Coppie" as a nickname, who needs to pay off medical bills for a severed tail and injured pelvis.

Onto the main event. As someone who missed Gilla Band's recent Whelan's residency (sick to my stomach at that), the build up to their eagerly awaited Dublin return in a bigger venue was intense.

The gig was seemingly a meeting for half of Ireland's music industry, with plenty of familiar rockers, noise groovers, indie kids and post-punks spotted in the crowd. It makes sense, given that Duggan lectures at BIMM Dublin and Fox produces and sound engineers for many talents. There was also a Fontaines D.C. bassist spotted, who complimented the National Stadium's hot dogs...and also Gilla Band (Mr Deegan dubbed both "amazing").

Safe Gigs Ireland were in attendance, with drummer Adam Faulkner sporting a t-shirt from the organisation that aims to stop harassment at shows. The new initiative was created to make nightlife safer by pursuing a zero tolerance environment for sexual violence. It was great, and comforting for lone female-identifying attendees in particular, to see their stall at the boxing stadium.

Blue light lit the dark stage as the crowd waited after 9pm for the Dublin-formed quartet to hit the stage with their usual riotous noise, paralleling with their self-deprecating, laidback personalities. Frontman Dara Kiely, guitarist Alan Duggan, bassist Daniel Fox, and Faulkner walked on with the fuzz reverb already filling up the room, adding a layer of tension the crowd revelled in.

Opening with 'Going Norway', the audience doesn't waste a second before swaying towards a mosh pit. The effect Gilla Band have on gig-goers is always mentioned in reviews, but it's pretty magical to watch. The 2019 track from The Talkies is an epic introduction, with heavy drum percussion as Dara drawls: "And why is the death so alive? / A cough engine / Bitter stale / Or better steal a belter." The push and pull of guitar riffs and drum beats as the swelling grows bigger and bolder and then retreats is what Gilla Band do best, obviously.

'Lawman' nearly causes a riot, as we shout back: "He said / Everything about her was contagious" to Dara, who says little in between songs, save for thanking the fans for coming. The 2015 single originates from The Early Years EP, and marked the start of big things for the Irish band.

'Post Ryan' begins with an eerie fuzz before Faulkner enters with a steady, powerful drum beat. The closing track from Most Normal is one of the most meaningful songs Kiely has ever penned, confessing: "I'm in between breakdowns / Constantly in recovery." Simultaneously claustrophobic, suffocating and chaotic and yet beautifully cathartic, it twists and turns like someone writhing around on the ground. "I'm just the same prick," he declares. "I get inevitable depression when I do nothing."

Using a warped interpolation of the beat from Flock of Seagulls’ hit 'I Ran (So Far Away)', surrealistic imagery and a droning bassline that runs up and down, it's a hypnotic live effort.

Oldies but goldies 'The Last Riddler' and 'Heckle the Flames' follow, with the former coming in at a cool, explosive one minute and 20 seconds. The latter sees Kiely compete his screeching over wailing guitars and pounding drums that never let up. Faulkner's arms must be falling off at this point. We hope Dara has some kind of ginger and lemon tea waiting backstage after that vocal performance in particular.

'Fucking Butter' from 2015's Holding Hands With Jamie precedes 'The Weirds', with their trademark intense guitar riffs going every which way. The latter Most Normal track gets a strong reception, with static and an almost fearful sonic ambience forging a strange, otherworldly environment.

"Here's a sermon, flick it over, it's a pile of shite / Said I'll tell this and that, what's left is right," the Fingal native says on the more down-tempo, anxious number.

'Gushie' and Most Normal's 'Bin Liner Fashion' pick up the pace again, injecting humour with "I can't wear hats, I just get slagged" emerging as the best lyric amid the scream therapy, relentless walls of guitar sound and percussion.

'De Bom Bom' from The Early Years EP and 'Laggard' (The Talkies) see Fox and Duggan show off their endlessly creative props and skills, while 2015 fan favourite 'Pears for Lunch' gets plenty of deserved applause.

"I look crap with my top off," the audience roars. "Spend my time watching Top Gear with my trousers down / Covered in Sudocrem and talking to myself / Garlic Curry Cheese Chips," Kiely replies. It's hilarious, off-the-walls and born to be performed amid a crowd seeking escapism. Harsh, rhythmic noise and droll angst are the cherry on top. 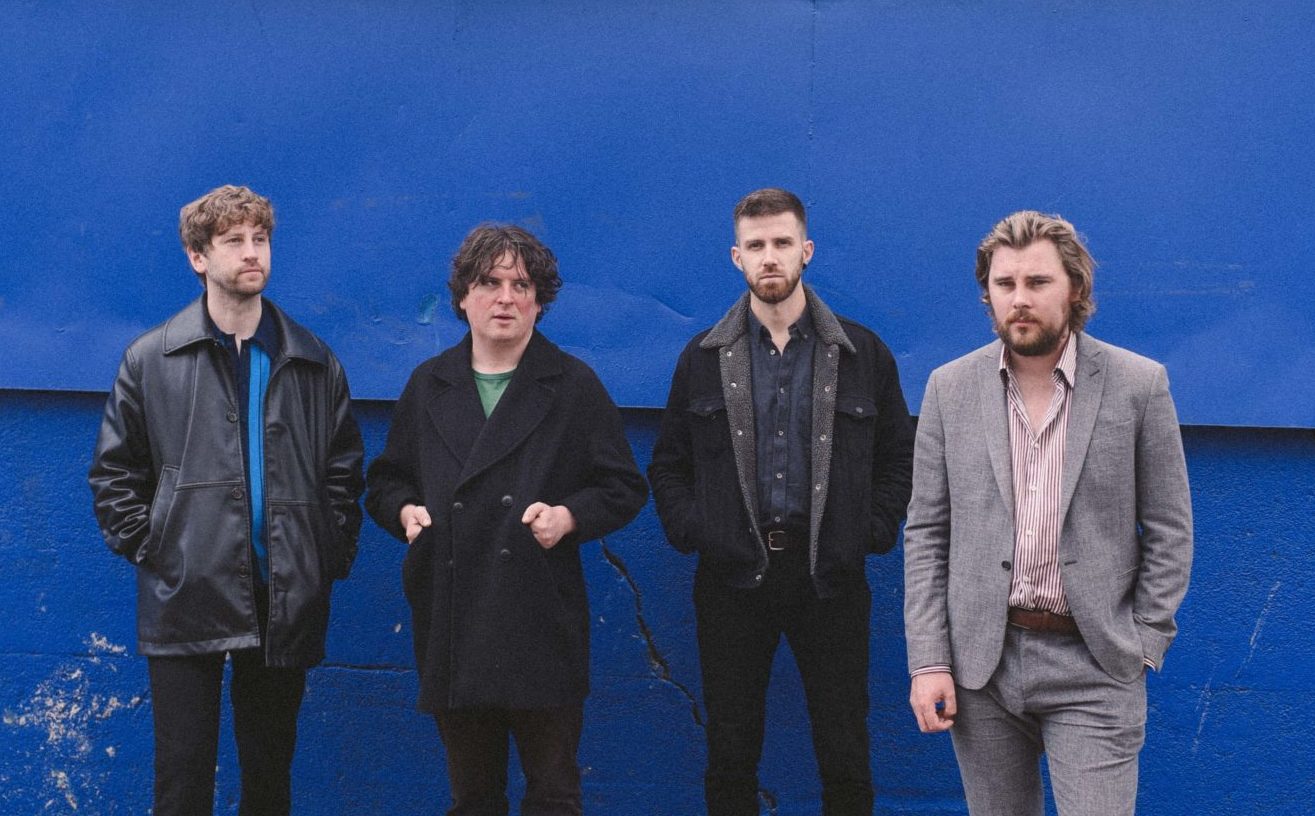 'Almost Soon' kicks into gear before Most Normal tracks, 'Backwash' and 'Eight Fivers', immediately become some the gig's standout moments.

"‘Backwash’ is one of the few tracks where the words represent a dream-like circumstance," Dara Kiely originally said of the single. "The lyrics are from a stream of consciousness rant, weird imagery and all that. The track is about attraction – fancying someone and not knowing what to say exactly. It’s an indirect love song, knowing you like someone but can’t quite articulate it. Thinking that you have already expressed your feelings, but like waking up from a dream you’ve forgotten what you actually have said or felt.”

Using influences ranging from hip-hop, techno, punk and beyond in their guitar noise, it's one of the most creative tracks they've ever written. Binge watching the Big Brother box set, using digital processing to blow the music in every abrasive direction; it's like being dragged down a waterslide in the dark when you can't predict the end-point. But it's fun?

The final pairing is perfectly chosen, marking one of the hardest tracks to perform live - 2019's The Talkies anthem 'Shoulderblades' - and the tune to end it all: their legendary Blawan cover of 'Why They Hide Their Bodies Under My Garage?' from The Early Years EP.

Demonic guitars, consistently nerve-inducing drums begin before Dara's vocals enter the fore. Everyone knows the words, and that it's the band's final tune of the night, so the movement swells to new levels. No one wants it to end, but unfortunately it has to. "Have a great holiday season, we'll see you soon," Kiely smiles before the quartet scoot off stage. No encore, no nonsense. The lights come on, and the crowd dissipates, a burden lifted off their shoulder (blades) as they release whatever stress had built up in their bodies since Whelan's.

Most Normal is out now via Rough Trade.