Cheers, tears, and a whole lotta cowboy hats took over Croke Park for the opening night of Garth Brooks' country "love fest" yesterday. "It’s like I waited for this concert my whole damn life," the superstar told the ecstatic crowd, and the show truly was worth the wait. Featuring breakthrough hits like 'Friends in Low Places' and 'If Tomorrow Never Comes', a spectacular light show, and an overall lovely atmosphere, the performance ticked all the boxes.

“As you get older in this business, you think that people love you more for what you’ve done than what you do. I will tell you this, Ireland, never before tonight have I felt…” We will never know how country superstar Garth Brooks felt exactly because exuberant cheers and claps drowned out the rest of the sentence. But the Croker crowd knows – Garth loves us. He has told us repeatedly, blowing kisses, commenting on people’s signs, and even jumping down into the crowd for ‘Friends in Low Places’.

In fact, the 1990 hit and arguably his most well-known song, was one of the stand-out moments of Garth Brooks' opening night at Croke Park on Friday. It came halfway through the show and by then absolutely everyone was singing along, the stadium was bathed in colourful light, a camera zoomed across the sky as Brooks' five Dublin shows are being filmed for release. Then, more golden confetti shot up from the stage – the atmosphere was electric.

“It doesn’t matter where around the world you go, you guys seem to know that there’s another verse to this song,” Brooks screamed. “And so tonight, we sing it together, shall we?” We did.

Even before his five-night run at Croke Park, a jubilant return to Ireland where he last played in 1997, Brooks has made it clear that the Emerald Isle holds a special place in his heart. So it came as no surprise when his song ‘Ireland’ sounded across the pitch.

The singer appeared on stage at 8pm to ‘All Day Long’, a high-energy number, featuring the fitting opening line, “Somebody’s gotta start the weekend”. The 60-year-old, who looked remarkably well after shedding 50lb, was dressed in boot-cut Wrangler jeans, shiny black boots, a black shirt and, naturally, a black Stetson that brought his cowboy outfit to perfection.

The giant stage and walkway that protruded into a sea of cowboy hats (some more traditional in black and brown, others pink and bedazzled with rhinestones), was lit up brightly, including its impressive arch from which a glistering mirrorball was swaying high above the crowd. The two bass drums were fittingly emblazoned with shamrocks and a lower case ‘g’, with some of Brooks’ band members wearing green for the occasion.

The setup was perfect and so was the show. Brooks certainly did not disappoint, playing all of his greatest hits – from ‘If Tomorrow Never Comes’ to ‘Unanswered Prayers’ and ‘The Dance’, a particularly romantic number that saw people sway along arm-in-arm and share a kiss with loved ones.

Speaking of love, there was a lot of love in the air last night, not least because Brooks brought his wife of 17 years Trisha Yearwood up on stage. Donning a sequined jumpsuit, black dangly earrings and shiny golden eyeshadow, her powerful voice echoed across the stadium during a truly stunning cover of Lady Gaga and Bradley Cooper’s ‘Shallow’ from A Star is Born. A celebrated musician in her own right, Yearwood also performed her debut single ‘She’s in Love With a Boy’ – followed by a kiss with Brooks. “God bless you Ireland, thank you,” and she was gone again.

The entire opening night was a celebration of live music, with a slew of upbeat hits that made the crowd dance along wildly and wave their banners – one of which read ‘Welcome Home Gareth’ against a Tricolour backdrop. Brooks’ ‘The Thunder Rolls’ stood out as one of his darker songs and was introduced by the singer with a reference to the previously less promising weather forecast.

“The hurricane has decided to go back out,” Brooks told his 80,000 fans at Croker. 410,000 tickets have been sold ahead of his five Ireland gigs, with upcoming shows this weekend and next. “It looks like tonight is gonna be absolutely perfect for the opening night. But Ireland, understand, hurricane or not, the thunder is going to roll.” 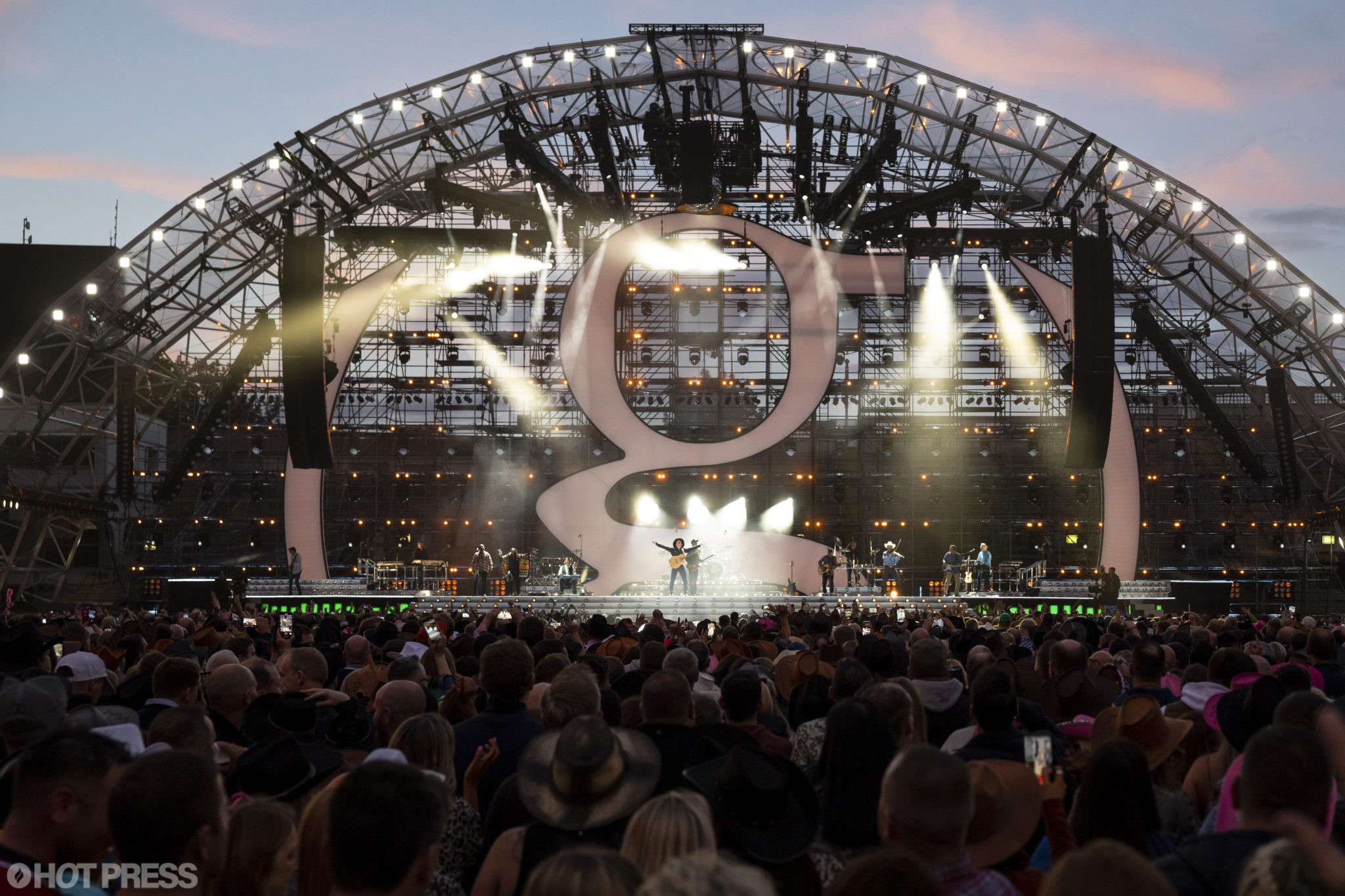 The country superstar also made sure to introduce all of his band members – and there were a lot of them, some of whom have been with him since the late 80s and early 90s, and praised their talent, attitude and work ethic.

It was a very emotional night with many tears shed. “I can’t believe we actually made it to this moment,” Brooks admitted at one point, kneeling down on stage and wiping his eyes. After the “debacle” of 2014, as he put it, when a licensing dispute meant he did not play Croke Park as planned, it seemed as though the country singer was genuinely thrilled to be back in Ireland, and his audience was happy to have him. They were absolutely delighted with his set that featured 'Papa Loved Mama', 'What She’s Doing Now', 'Shameless', 'Two Pina Coladas' and 'Rodeo', among many other hits.

Brooks then introduced ‘Callin' Baton Rouge’, his favourite song to perform live, “This is always my favourite song. I hope somebody loves this song as much as I do,” and the fiddle started playing. After two encores, the country singer ended on an acoustic version of ‘American Pie’ just after 10pm, which brought the party atmosphere back once more.