Dylan Flynn and the Dead Poets were joined by Dublin group Banríon and local band Small Church for the revival of the Limerick collective.

On Saturday, November 26, BitDepth returned after a long few years.

BitDepth is a Limerick based collective, supporting local musicians with gigs, releases, etc. For their first gig back, the collective presented Dylan Flynn and the Dead Poets with Banríon and Small Church. Pharmcia was packed out with anticipation and excitement.

The relatively new Limerick band Small Church opened the night, with an eager audience watching on. The four-piece consists of PowPig frontwoman, singer and guitarist Andreea Mocanu, drummer Paddy Critchley, Killian Moran on bass, and Sean Horgan on keys/synth. While waiting to resolve a technical issue with the keys, Andreea kicked off with a solo piece, unnamed - as most of their pieces seem to be. 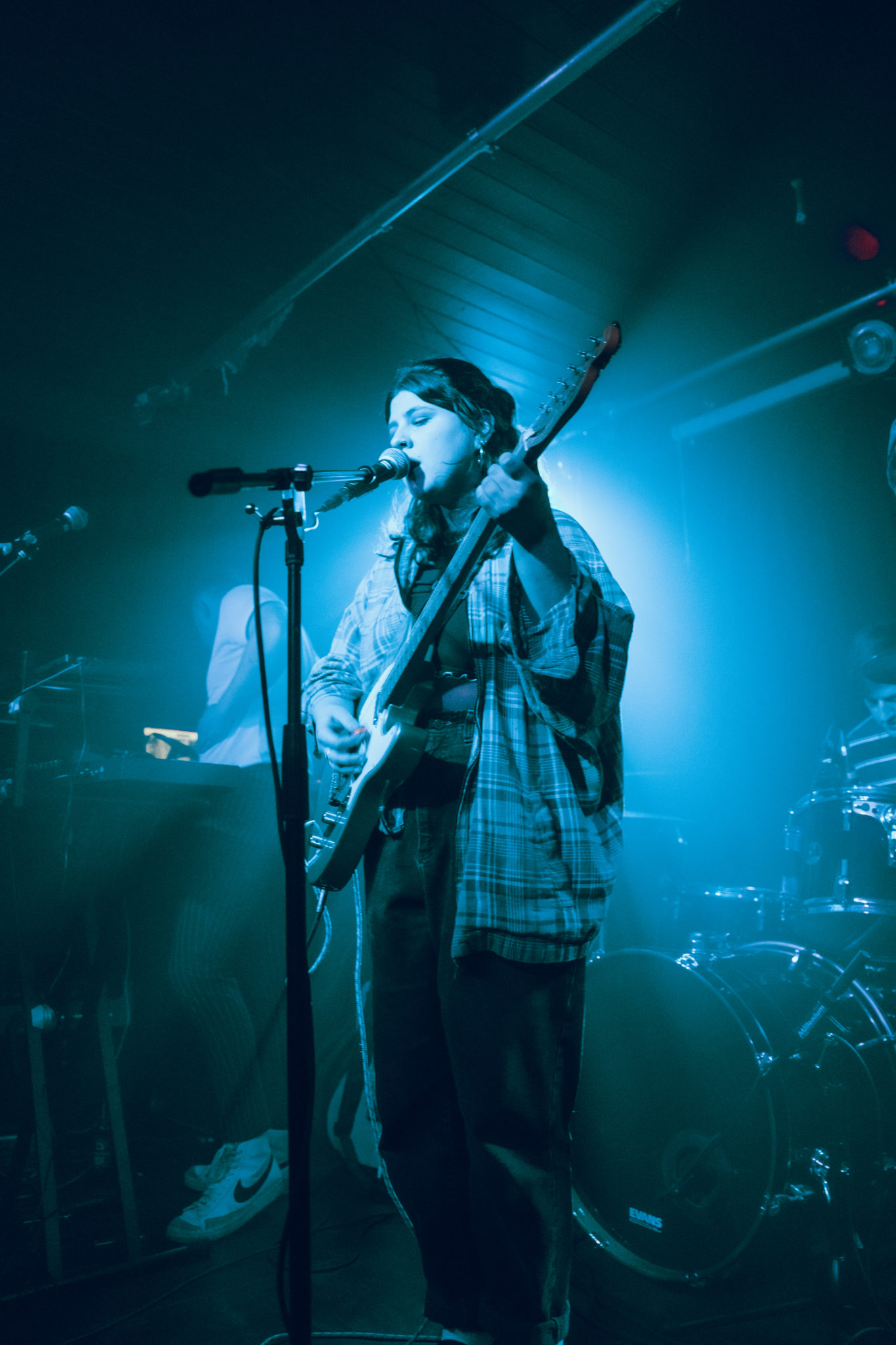 When everything was ready to go, the band showcased their full sound with the track 'I'm Aware'. Andreea's gritty yet angelic vocal fronted the piece, capturing the attention of the bustling audience. A paired back indie-rock tone exuded from the track, setting the mood perfectly for their set.

Moving seamlessly into a jazz-rock track, the piece was affectionately called 'Andreea Song' as it has yet to be named. Bringing a beautifully gravelly quality to this jazz-feel track, a gorgeous synth piece acted as a guitar solo - an unusual but incredibly impressive element to the band. 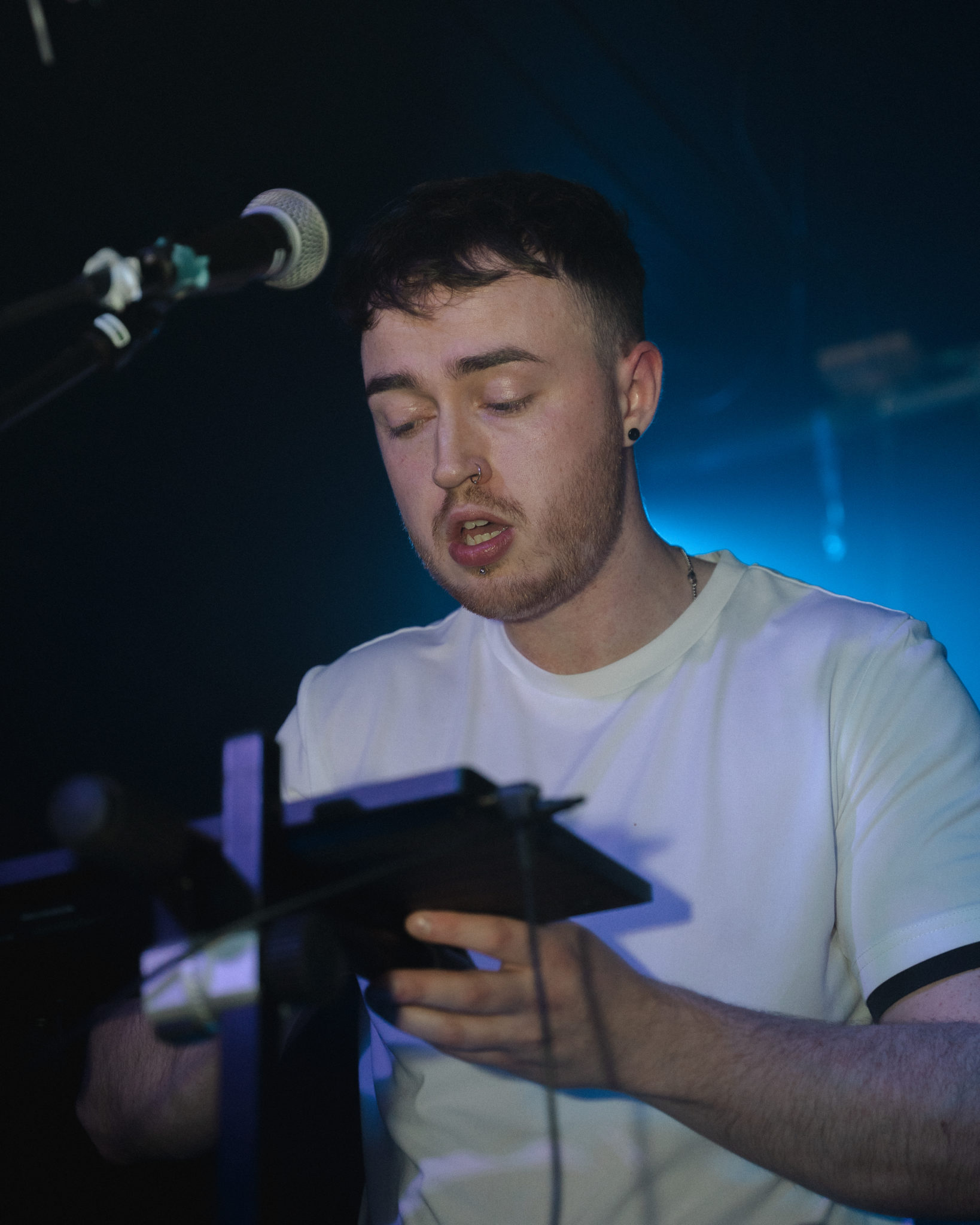 'Fake Grass' saw Andreea hand off the guitar work to Killian for a bass-less piece, which ultimately gave this track a much more upbeat lighter feel. 'Here' came next, a poignant, angsty piece, with stunning vocal breaks and drum which demand your attention. The crowd lapped every track up, feeling the confidence oozing from this outfit.

Grungy bass from Killian kicks off the next one with high ethereal notes easing from the synth. Killian then warns of a sad one coming up next. Although sad, this track was the most punk-leaning of the set, with gritty screamo-esque vocals heavily featured, which the audience adored. Finally, the band wrapped up with a bouncy, drum heavy track, featuring a stellar guitar solo from Andreea. 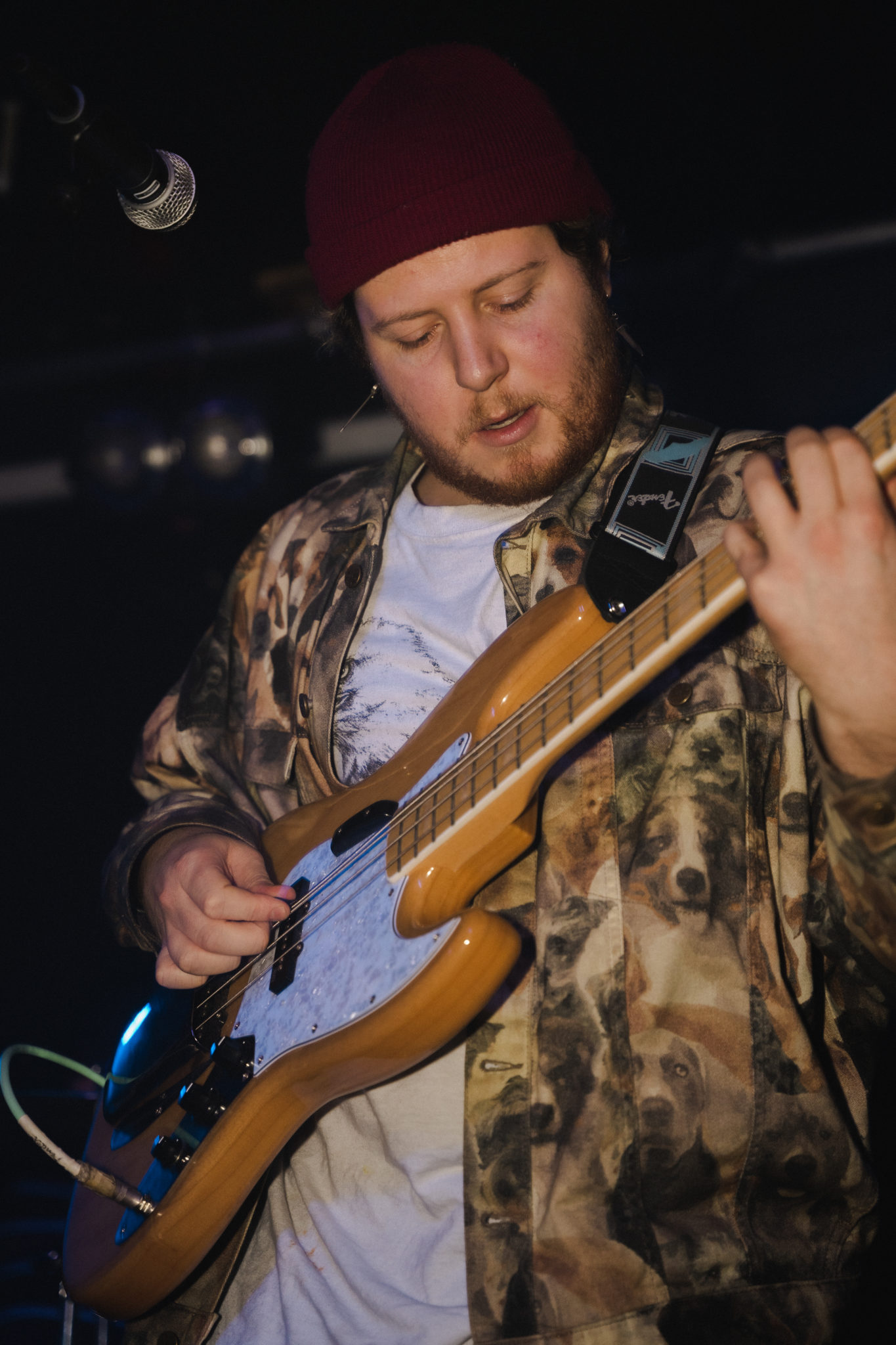 Although fairly new, this group have cemented themselves as ones to watch amongst the Limerick scene - currently recording their debut EP for release hopefully as soon as possible!

Following on was Dublin-based outfit, Banríon - a group who're steadily climbing the rungs of the Irish music scene. Starting off with an exquisite soft indie peace, featuring stunning cymbal heavy drums, the group grabbed the attention of the crowd quickly.

While the sound from the band was incredible - when frontwoman Roísín Ní Haicéid was speaking to the crowd it was quite hard to hear, due to the soft quality to her voice and the pub downstairs - for this reason, it was difficult to catch the names of a lot of unreleased tracks. 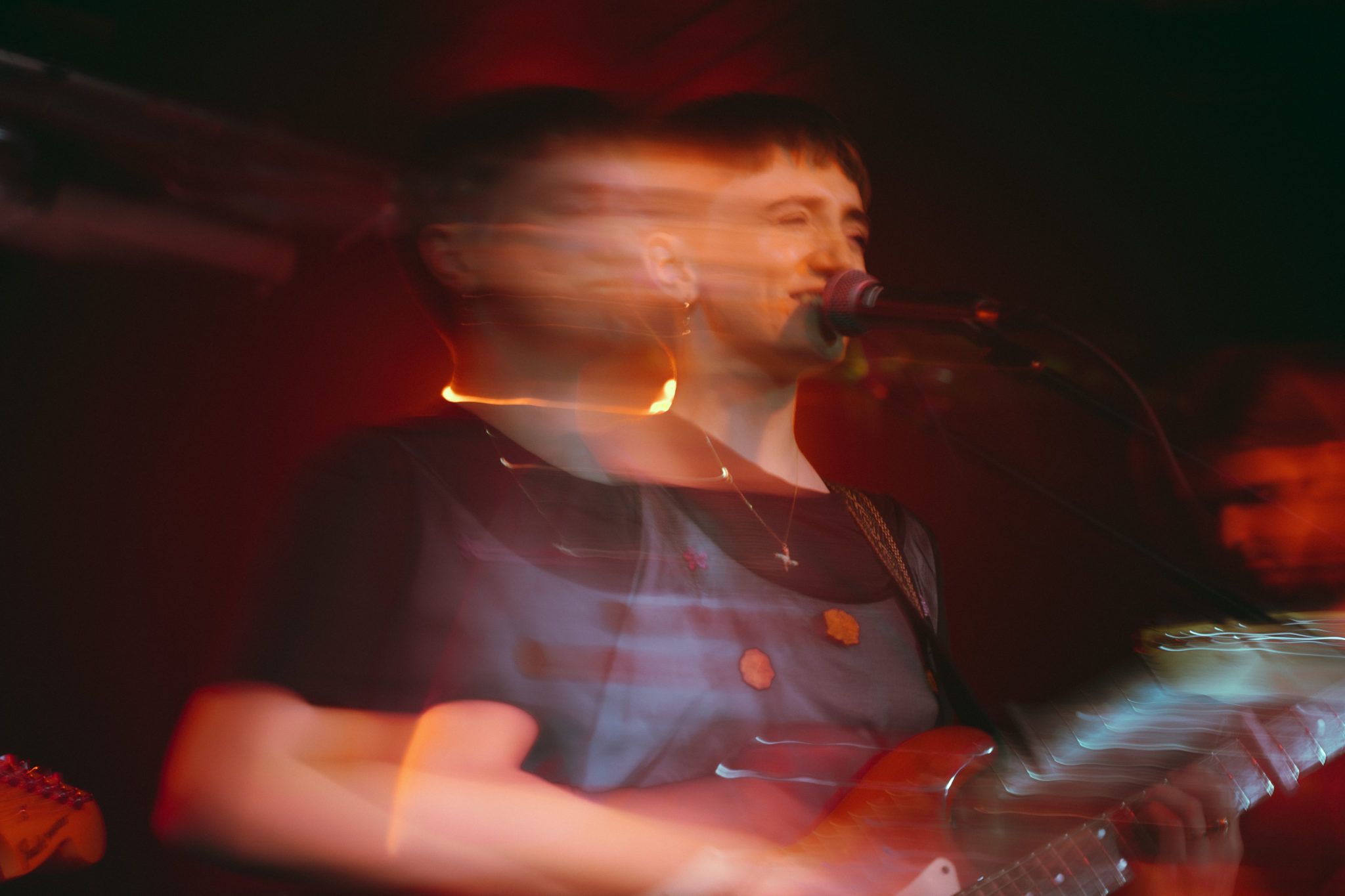 A much more upbeat track came in second, titled 'nothing to lose' - I'm almost sure! With a sick guitar solo, 'ouchie' was next from the four-piece's debut EP airport dads. 'Souncloud', with a beautifully sleeping indie vocal fronting, featured expertly placed vocal breaks.

At this point the band took a minute to address the audience, saying it was great to be "back in the greatest city on Earth." Bassist John Harding, guitarist Ivan Rakhmanin and drummer Michael Nagle chanted "Limerick, Limerick," to a very eager crowd.

"Another sad one," singer, Roísín giggled before launching into their following track.

The singer described the following track as a "song about when her ex-boyfriend broke up" with her "cause he was moving to America and then he never did." A grungy/rocky track, this song was much heavier than others played, with Rakhmanin screaming back-up vocals without a mic. 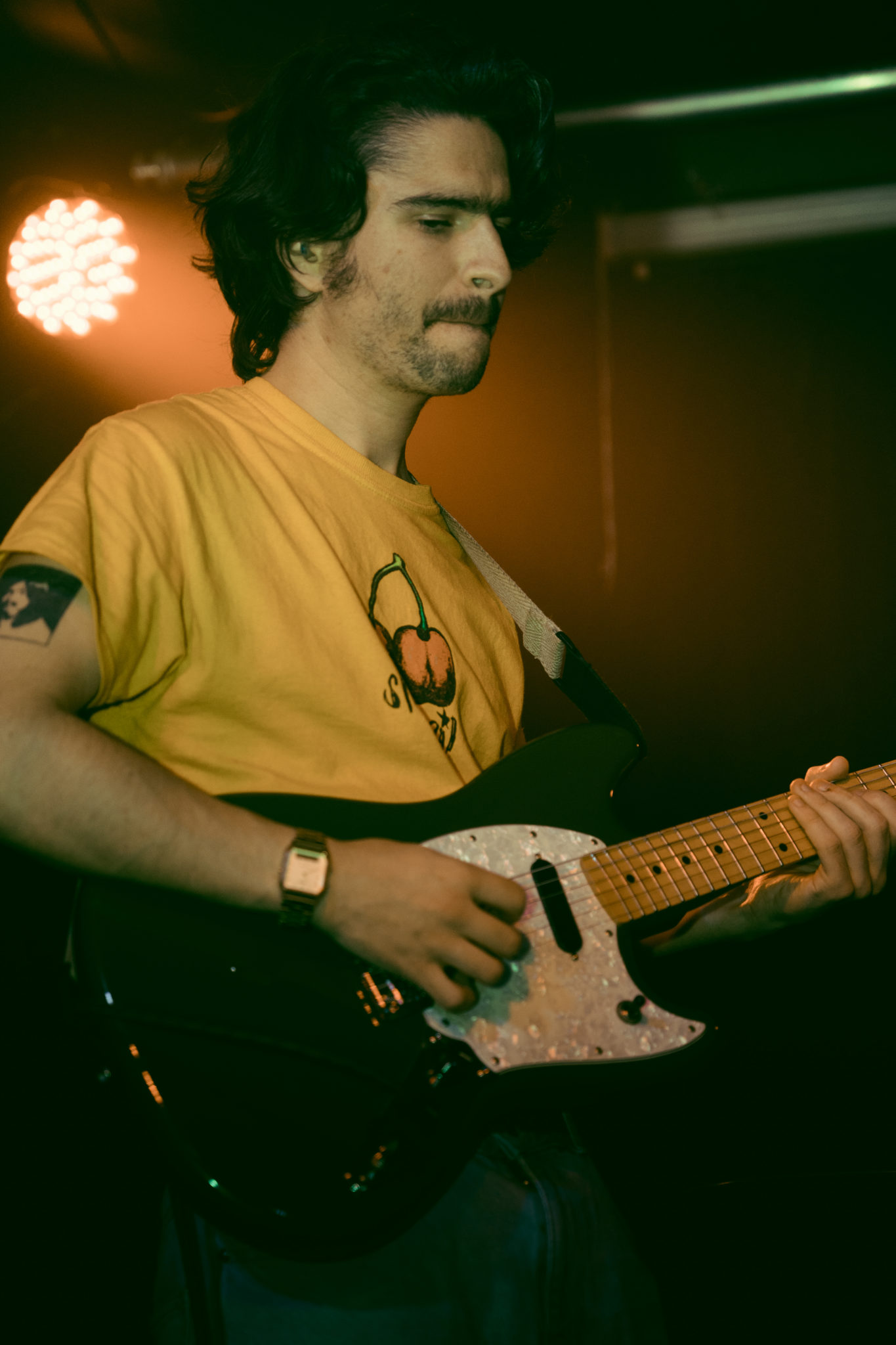 During their set, the frontwoman let slip that a new EP will be coming from the band - titled Dare To Crush - an announcement which got fans very excited!

'Sugar Water', which the band describe as a "slow burner", boasted beautiful swells and perfectly timed breaks. The track built to a crescendo where the full band went in with force, undeniably lifting the room. 'country music' was slipped into their set as well, while the group finished up on their latest single 'fooling' - with hiphop drum beats carrying a unique contrast to the gorgeously airy vocals.

The entire band looked delighted to be performing the whole way through their set, but the energy from frontwoman Roísín was undeniably infectious. 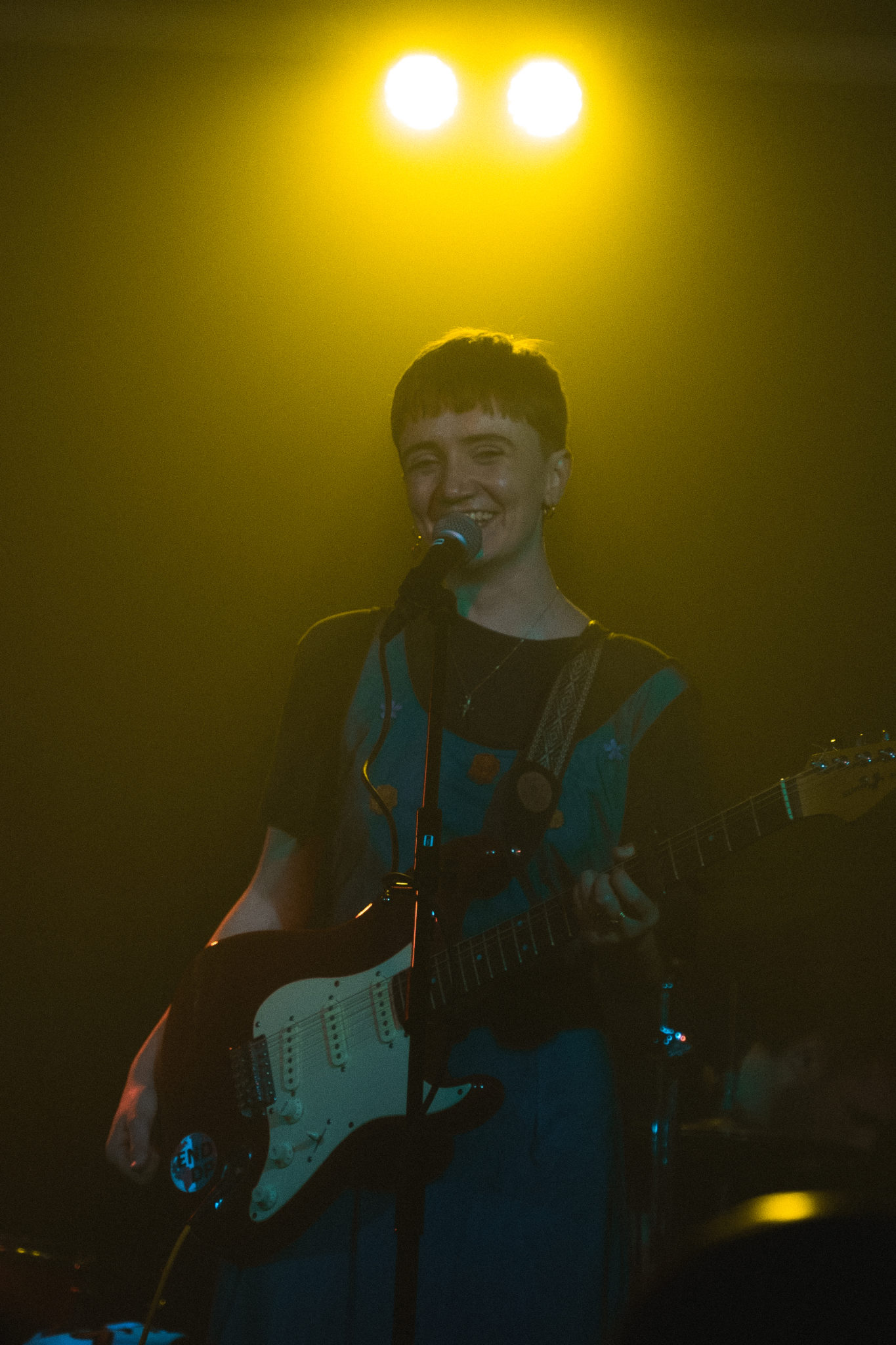 The final act of the night to grace the Pharmacia stage were headliners Dylan Flynn and the Dead Poets. Kicking off with 'i wasn't ready', lead singer Flynn's vocals decorated the room perfectly, instantly enticing crowds back towards the stage.

Without stopping, the outfit blended this straight into 'love', where it became evident that the group were down player - Chris, saxophone, keys and synth maestro wasn't on stage. After playing through a grittier version of 'days' before revealing that they had a bit of a disaster before the show. Chris was sick and the day before Dylan has nearly made himself concussed, which explained the hat he kept on throughout the show.

The frontman then revealed the group are releasing their debut album, which they've been working away on for months. With this revealed, the indie-rock outfit played a brand new song - the first time playing it live. An intricate high guitar fronted the piece, with a catchy hook keeping the crowd's attention throughout. 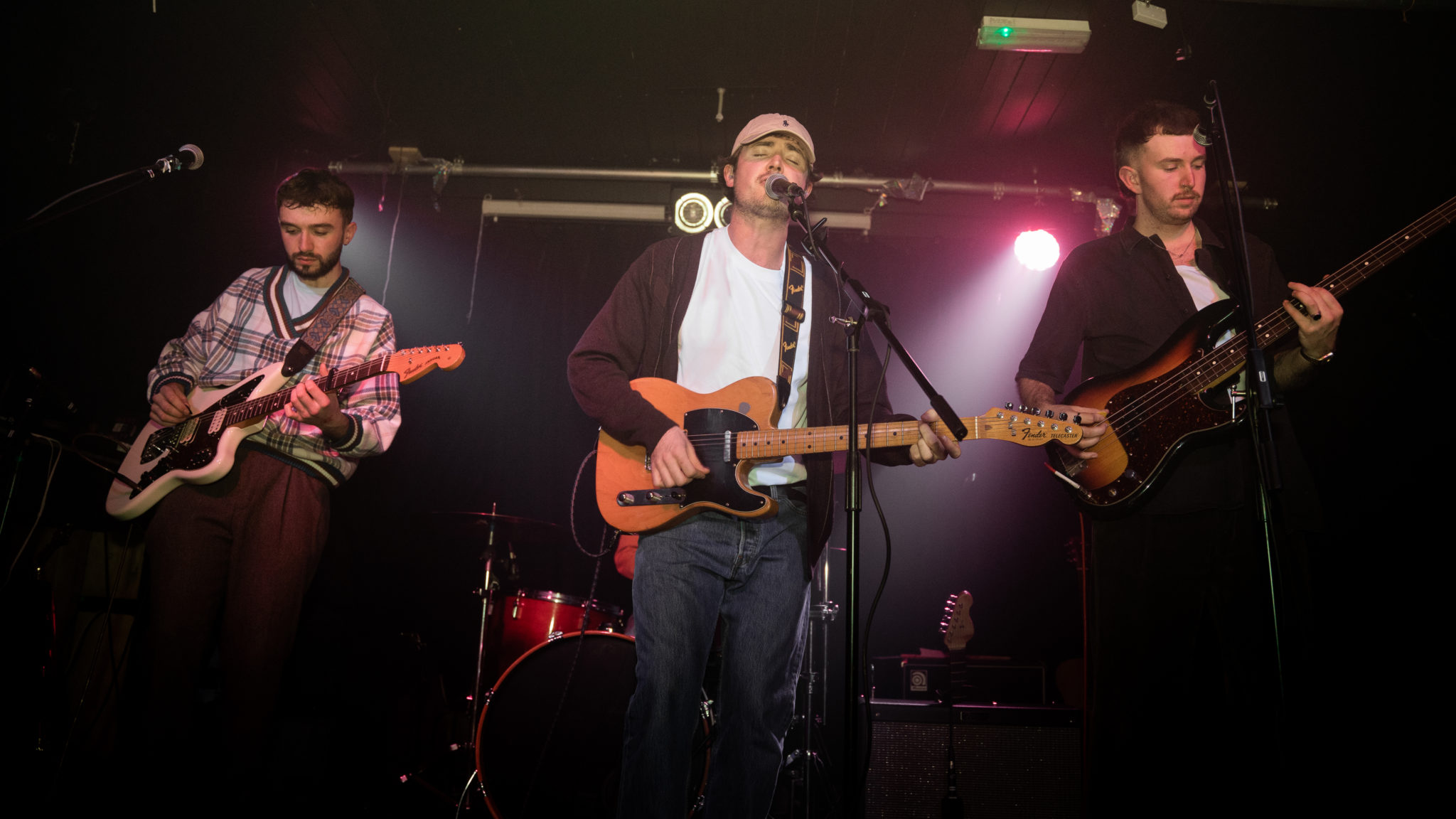 Following this, their newest single (which will be on their album) 'Life' got a spin. They described the track as "representative of the new album," with a slightly different feel to what they usually release.

Flynn then brought the set back to the band's roots, playing a track he told the crowd was about "when you want to go home and you can't" and that "awful feeling in the pit of your stomach." This song was beautifully paired back leading to an unexpected drop which brought the whole band in. Evan Forde brought exceptional drum beats into the breakdown, with fans screaming for the band. 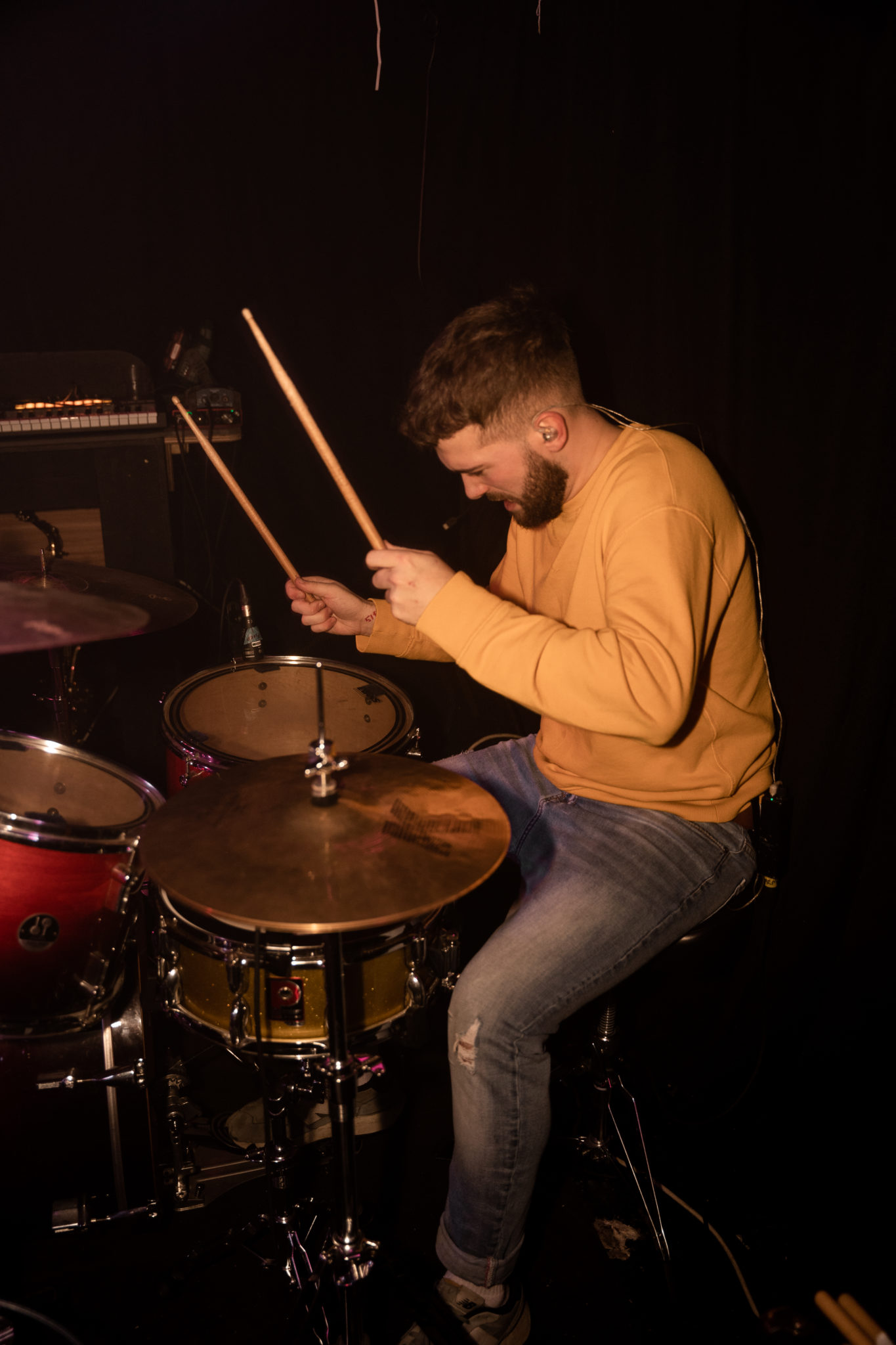 Up next, the outfit played a song they've "been writing for years," which will close their debut album. Titled 'fading', this piece was much heavier and different to the usual sound DFDP have established.

It was nice to hear that the band are branching outside their comfort zone with the forthcoming release, making it even more exciting for fans waiting on the album. 'miles' came next, with exceptional backing vocals coming from Keagan Forde. 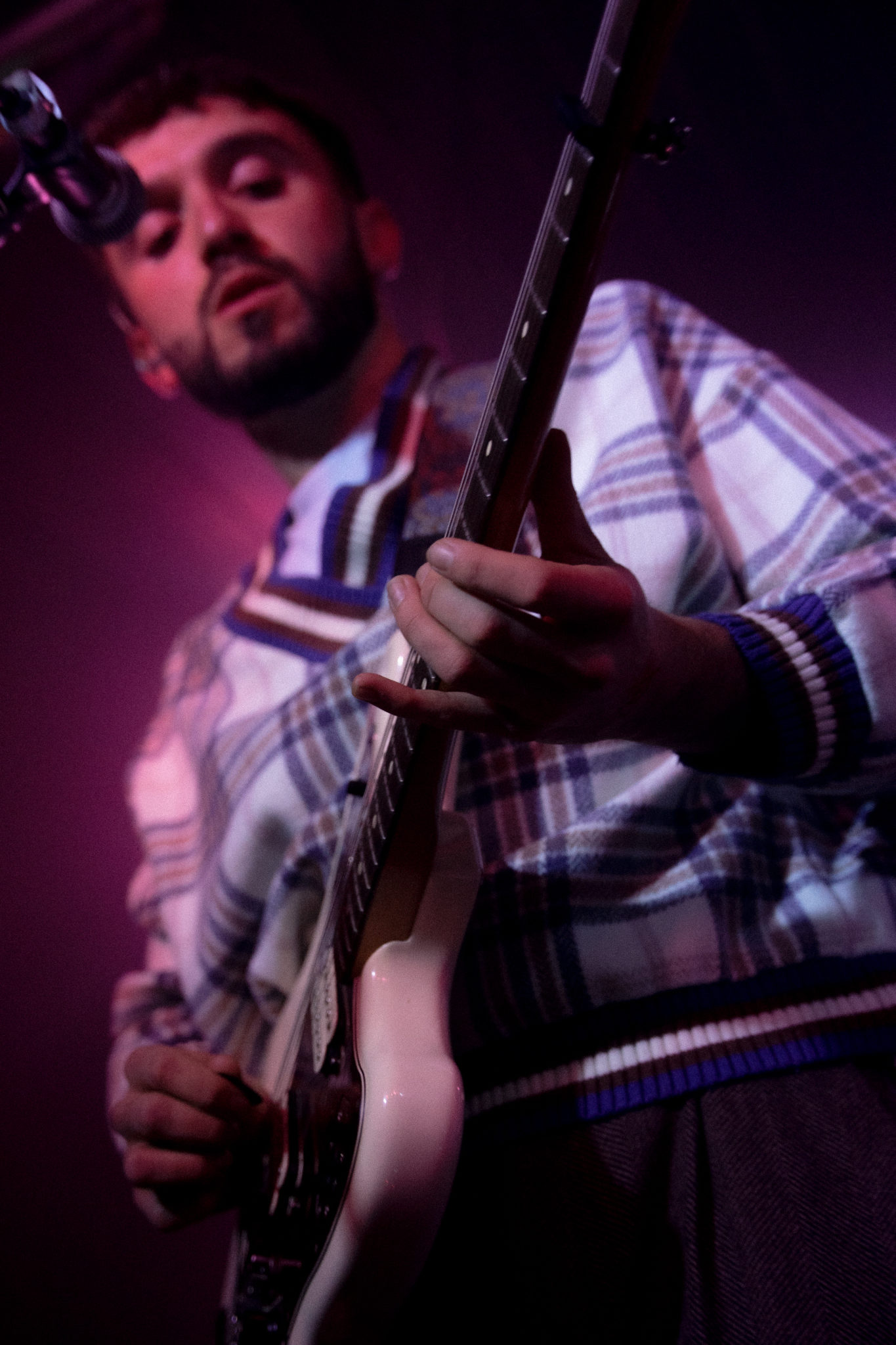 'everything will be okay' followed - a personal favourite and seemingly a crowd favourite! Every band member on the stage was grinning from ear to ear with pure joy - their happiness elevating the room. 'Running Away' closed their set list, as the crowd screamed for more.

As the band walked off the stage after an exceptionally strong set, the audience were clearly not done yet. Two rounds of "one more tune" echoed from the crowd, demanding the now four-piece return onto the stage.

The frontman laughed as he told us "you've put us on the spot now lads." A cover of 'Everybody Wants To Rule the World' showed off the band's talent to think quickly - with Flynn and bassist Emmett Ryan sharing a moment of glee as the song came to a close. 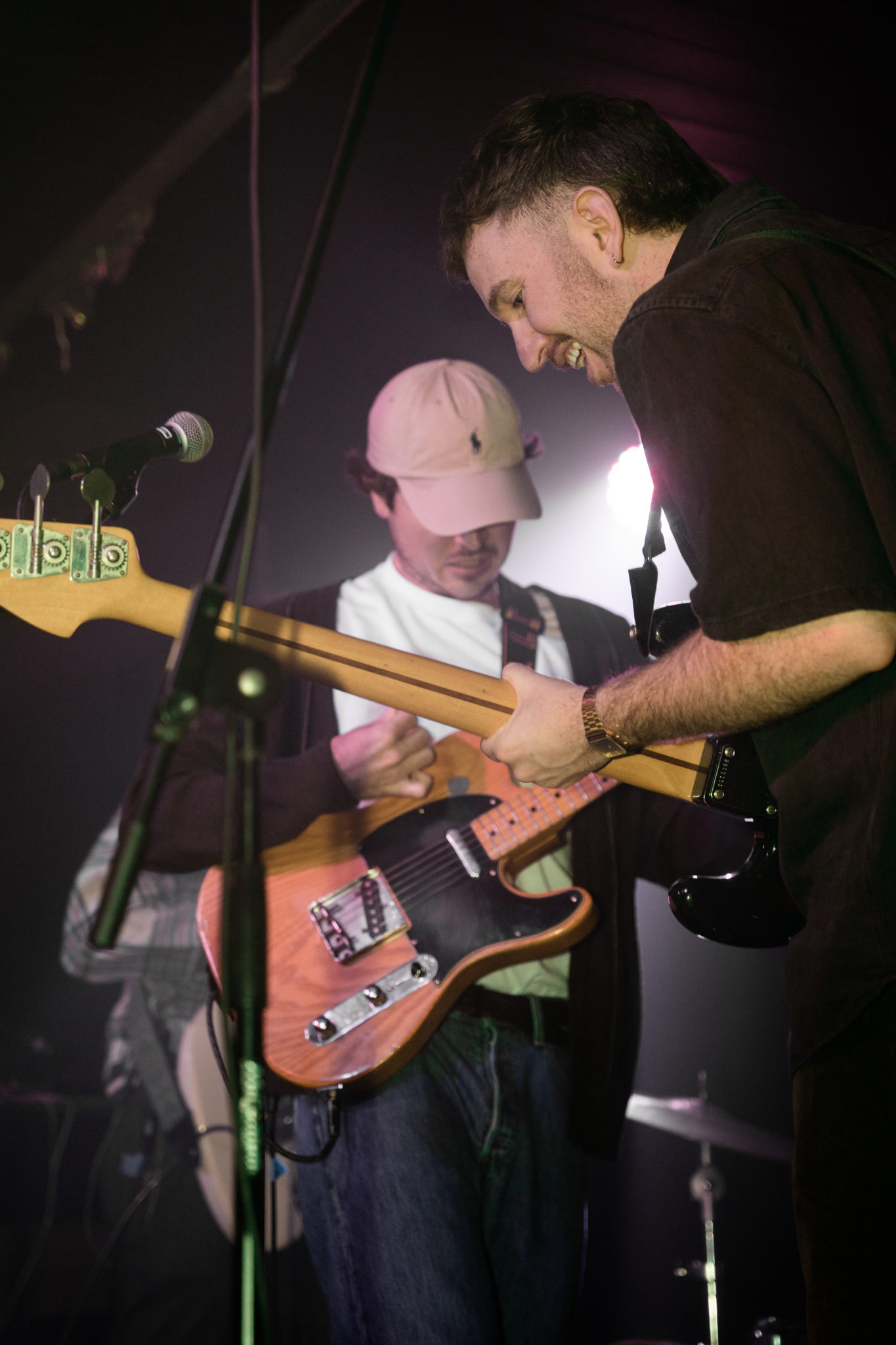 While there was a clear change without Chris, the band still performed impeccably, as always. It's clear this group are meant to be on the stage - and definitely together. Their friendship and musical bond stands out at every gig they play, providing an incredible time for their fans.

A thoroughly satisfied crowd filtered out of Pharmacia, after a deeply entertaining performance by the group, as well as the two other bands.

DFDP's final headliner of the year - this gig just made me more excited to see what next year brings for the group as they move closer to the release of their debut album and hopefully another tour.