Welcoming thousands of fans back to Stradbally after a long wait, the Limerick rapper opened the main stage with a sensational set - kicking off Electric Picnic the right way.

First to the main stage at Electric Picnic after three years of built-up anticipation, Limerick's Denise Chaila floored an eager audience. Accompanied by the narolane squad: God Knows, MuRli and DJ CC, an air of excitement was palpable.

Dressed in a magnificent tulle dress and corset, face bedazzled with pearls, accompanied by a golden crown, Chaila lit up the sizeable Stradbally stage. Addressing the long wait we'd all endured before returning to Stradbally, Denise divulged what an honour it was to open this iconic festival.

First up on the hit-list was 'Man Like Me' - and a crowd of thousands converged on the main stage area to celebrate, at once, the self-styled King of Limerick and the re-opening of this landmark Irish event. "I'm feeling like a renaissance princess," Chaila giggled. And rightly so. The rapper couldn't have looked more at home in front of this impressively large crowd.

Chaila informed the ever-growing audience that the next three songs up would be 'Copper Bullet', 'Might Be' and 'Return of the King'.

The interaction with the crowd was incredible with Denise waving at individual fans, dancing with the crowd, and taking the time to teach Picnickers the lyrics before bouncing into 'Might Be'. The more energetic members of the audience echoed the lyrics to the rapper and a smile beamed across Denise's face. It was a moment to savour just how far Denise has come. Before kicking off the track, Chaila took a moment to address the Kanye West lyrics, saying that sometimes you need to call out our elders for their bad behaviour.

The contrast between MuRli and God Knows' 'performance faces' throughout was hysterical. God Knows' face embodied the grit in the lyrics, whilst MuRli made it obvious that he was just excited to be on one of the biggest imaginable Irish stages.

As this track came to an end, Denise took a moment to poetically revisit some of the most poignant lyrics. Chaila checked with the crowd if everything was okay every once in a while during the set - of course there was an uproarious agreement to whatever the Pharaoh wanted. 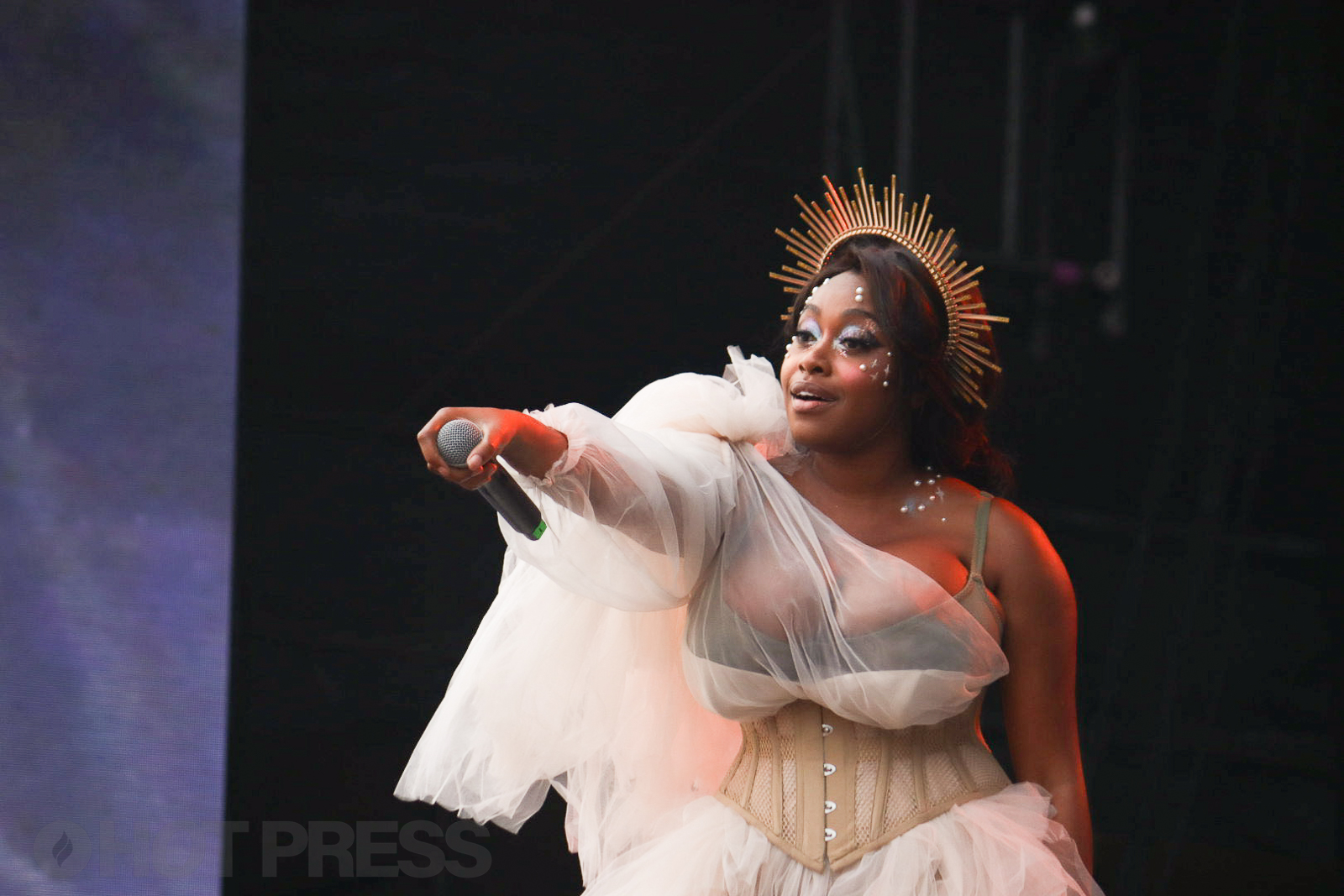 DJ CC dropped the track for 'Move', while Chaila reassured the crowd they'd pick up the lyrics along the way. "This one is easy," Denise said. Chaila sat cross legged in the centre of the stage, taking a few seconds to breathe it all in while engaging with the crowd.

The rapper then scolded those in the crowd who hadn't heard of the iconic hip hip producer and performer, J Dilla - much like at her recent performance in King John's Castle. The band moved on to the track 'Untitled/Fantastic', inspired by the producer.

Turning the attention to Chaila's much beloved jazz, Denise spoke about the father of the genre, Nat King Cole. Of course, this was followed by the sublime 'All That', with the audience happily participating throughout.

Taking an affectionate moment with MuRli, the rapper spoke about narolane, letting the crowd know that this set wasn't the only one of the gang would throughout the weekend.

Learning from their recent Limerick set, where the rapper spent so much time chatting to the audience it led to a slightly late finish, Chaila choked back her emotions and danced into 'Holy Grail'.

Nearing the end of the allotted stage time, the crowd clearly knew what to expect from the next three songs, and the sense of anticipation was tangible. Much to the audience's delight, the rapper began to recite the lyrics to 'Anseo' - a track they have now performed on some of the biggest festival stages in the Western world.

Following 'Anseo', the rapper smoothly transitioned to 'Chaila' – honestly, if the band had just stood on the stage and encouraged the crowd, Denise could have stayed schtum throughout. As far back as the eye could see, glittering Picnickers spelled out Chaila - dancing, smiling, and lapping up the festival environment.

Chanting: "I don't need to move to London, I need to move to LA, I'm from Limerick," the opening notes of '061' sent the crowd into a tizzy. The energy exuding from the stage was infectious, as the ecstatic crowd ate the track up. With the song drawing to a close, Chaila stood solo on the stage, again, poetically reciting the track's lyrics while the crowd clapped along to the beat.

Objectively the best possible choice for opening the Electric Picnic main stage 2022 in the crowd's eyes, it was heartening to see that Denise Chaila was visibly taken aback at the thunderous applause erupting from the crowd.

Fortunately, if you couldn't make the rapper's performance tonight, there's still time to catch the narolane crew tomorrow at the Three Ireland's All For Music stage, where they will be joined by some very special guests. Plus, there's also an appearance for a Q&A in the Hot Press Chat Room to look forward to. It is going to be a busy weekend for the gang!