The All Ireland winning Limerick hurlers were greeted by fans and musical acts at TUS Gaelic Grounds on Monday(July 18) evening.

On the hottest day in Ireland in over a century, Limerick hurling fans braved the 33 degree heat to welcome their 3-in-a-row All Ireland Senior Hurling Championship winners home to Limerick GAA headquarters, TUS Gaelic Grounds.

The homecoming organised for the team was the first to take place since the beginning of the pandemic. In that time, Limerick have won the highly coveted championship three years in a row - four out of the last five, to be exact. To properly celebrate, an over-the-top celebration took place - seeing a host of Limerick musicians, along with one Waterford blow in, take to the stage. 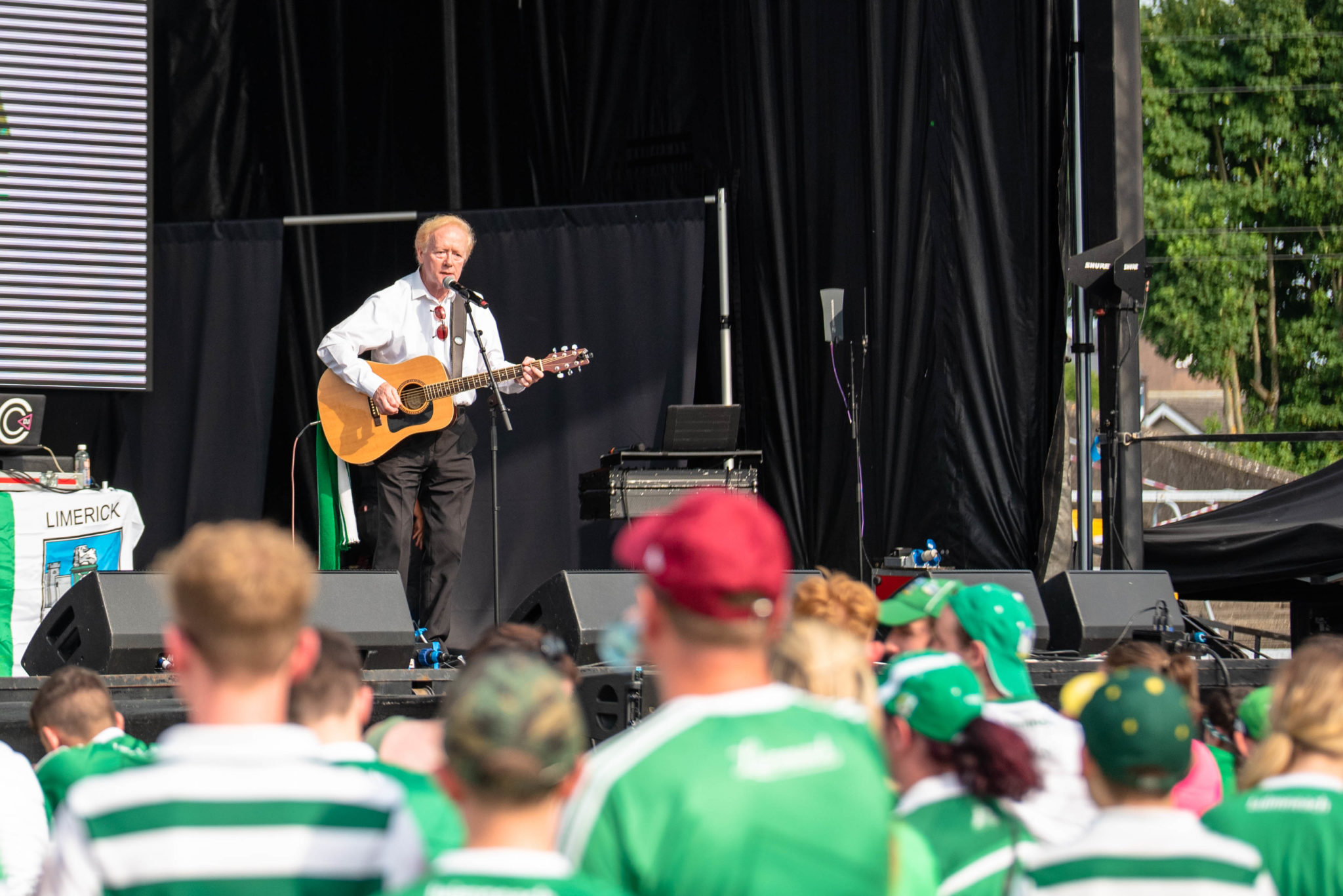 First up on the roster was Limerick's beloved Denis Allen. The singer-songwriter is extremely well known for his anthemic track 'Limerick You're A Lady'. Speaking to the crowd, Allen expressed his excitement at playing in Limerick for such a special event. Following his short introduction, the musician launched into his well-known Limerick-dedicated song. The crowd lapped it up, singing along to the iconic chorus.

From one singer-songwriter to another, Emma Langford was next to grace the stage. Donning an elegant green number, glistening head-piece, and local Limerick silversmith, Dave Barclay's River Shannon earrings, Langford opened her set with 'All You Want', a track from her debut album Quiet Giant. In between tracks the folk singer chatted to the crowd - discussing the difficulty of picking child friendly songs for this family event. The musician conveyed her want to sing the most Limerick song that comes to mind - The Rubberbandits' 'Horse Outside'.

Leaving out the "rude" words to the track, Langford started into a folkie version of the iconic song, before asking the crowd to sing the curse words for her. Emma got about a verse and a chorus through the song before calling it to a halt, laughingly saying she couldn't keep going at a family friendly level. This was made tenfold funnier by Langford about a minute later shouting "Luimneach-a-fucking-bú" before launching into 'Goodbye Hawaii' from her latest album Sowing Acorns. It was a pleasure to watch such a nationally renowned singer celebrating her home county with such gusto. 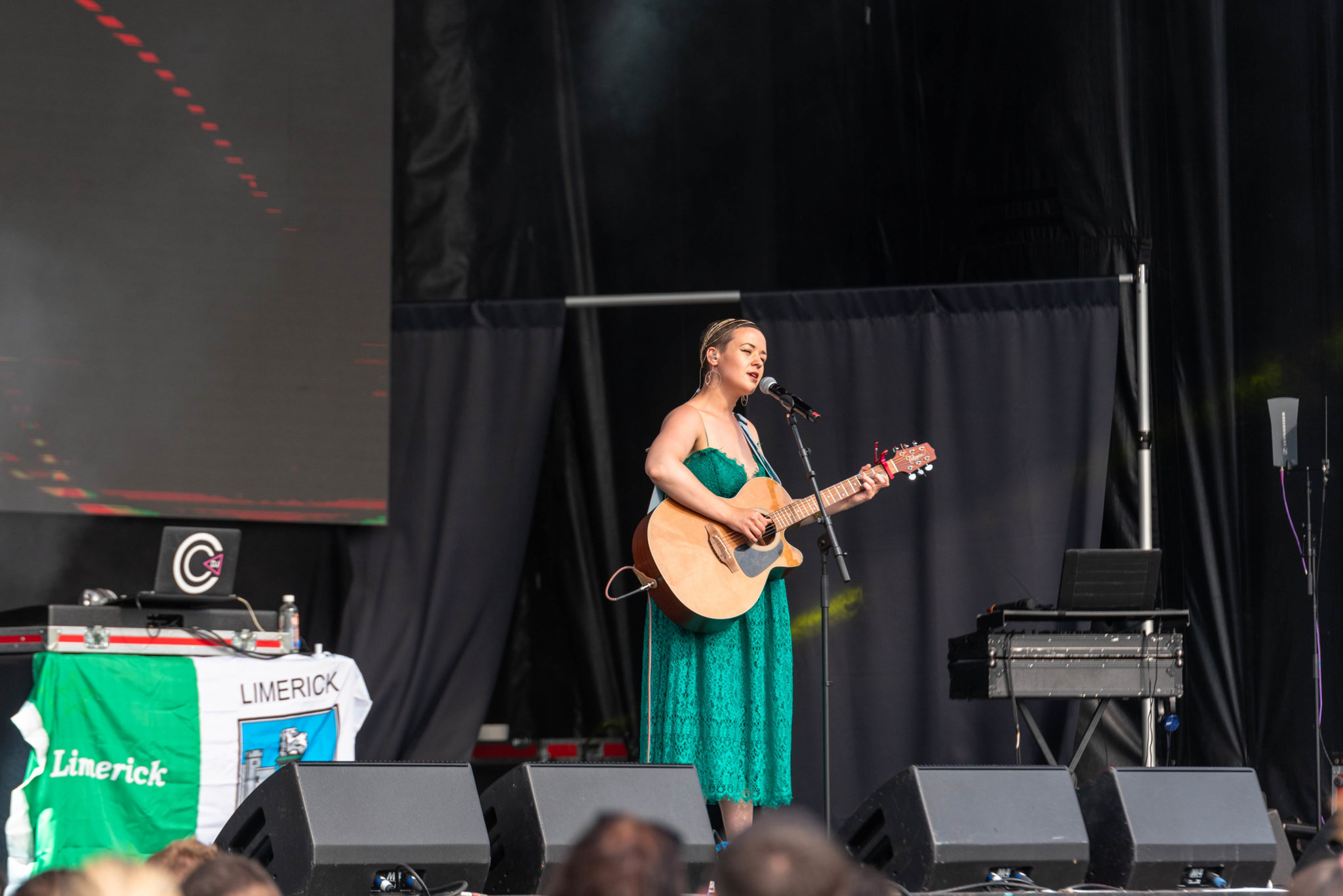 Following on from Langford, Waterford blow in Moncrieff took centre-stage. Despite Moncrieff's obvious up and coming notoriety, it was confusing why another Limerick act wasn't selected to fill the spot. It seems a lot of the crowd were wondering the same thing as the reception for the 'Warm' singer was anything but what his popular song title suggests. The beginning of the pop-singers set was hopeful, as he stormed the stage wearing a Limerick jersey, with hurl and slíotar in tow. A good portion of the way through his first track, a technical issue was encountered, and instead of moving on to the next track, Moncrieff chose to restart the song.

This is when the singer started losing the crowd. During this re-run of his track 'Like I Do', Moncrieff tried his hardest to get some crowd interaction but to very little avail. The artist pulled back the hurling fans a small bit by calling Limerick his "second home", saying his recent gig in Dolan's was one of the highlights of his career. The Waterford crooner played hit track 'Warm' and garnered more feedback and interaction. The solid mix between chest voice and falsetto in this track made obvious the singer's vocal talent. Closing out his set with new track 'Ruin', the ambivalence from the crowd was palpable. In another setting I'm sure his set would've gone down a treat, and while he's clearly an extremely talented and charismatic performer, unfortunately it wasn't the night for Moncrieff. 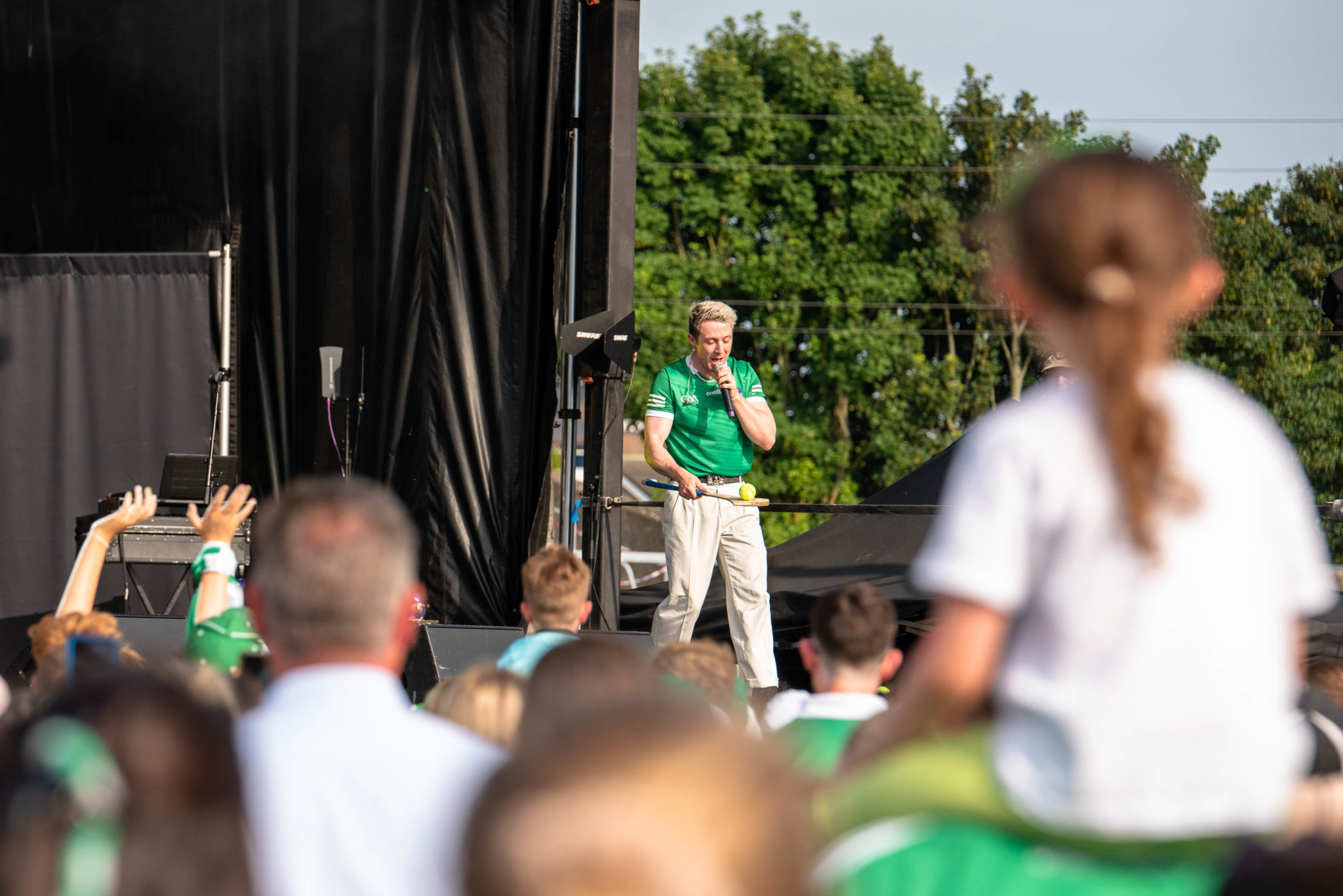 Back to Limerick performers, Narolane's Denise Chaila, MuRli, and God Knows finally arrived on the Gaelic Grounds' stage. Chaila is a known Limerick GAA supporter, having received a signed jersey from the Limerick panel prior to her support slot for Ed Sheeran on his stadium tour. The trio brought immediate energy to the stage, commanding the crowd to move with them but "don't get heatstroke now," as Chaila put it. Starting out with 'Energy', a track by Chaila featuring MuRli, the group gave nothing short of that. Next up, the trio flew into the God Knows track 'Glory' with the rapper climbing into the crowd, encouraging them to swing their hands from side to side. Climbing back onto the stage, the Limerick hip-hop trio loved the crowds energy while launching into 'Odyssey', another one of Hot Press' recent cover star MuRli's.

Addressing the audience hip-hop star Denise drew comparison between the Limerick hurling teams pandemic successes and her own. The artist proved her point by getting the crowd to sing along to 'Chaila', a track from her 2021 RTÉ Choice Music Prize Irish Album of the Year, Go Bravely. This track was cut short, with the trio's DJ Cesee blending the track into the true Limerick anthem '061' with a pitstop into 'Anseo'. '061' had the Limerick crowd dancing and singing along, cementing Chaila's place as the King of Limerick. 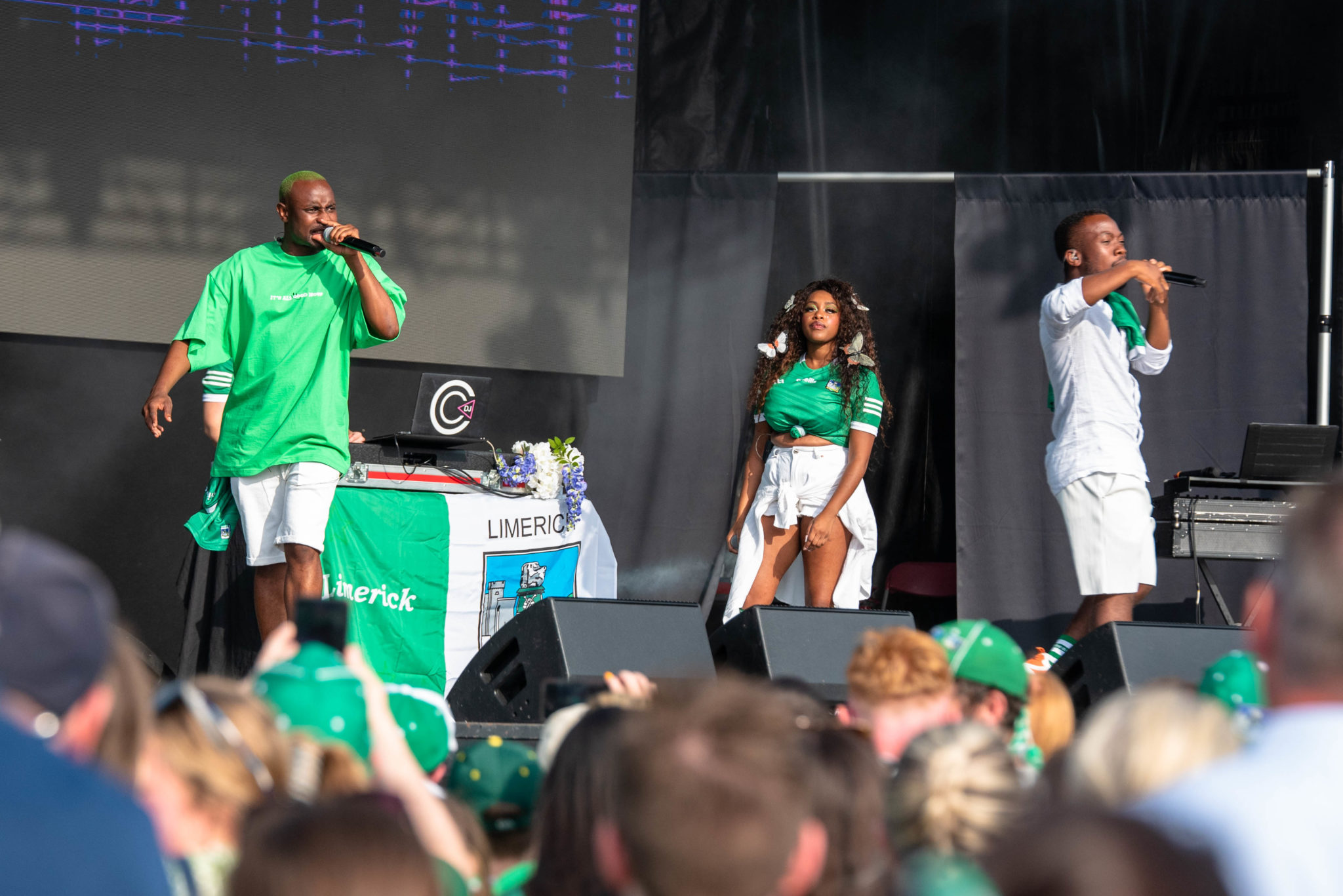 Following the musical performances, the crowd was addressed by Limerick Mayor Francis Foley who took a moment to memorialise the late Jordan Fitzgerald, a dedicated Limerick fan who passed away on the way to the teams' semi-final match. After a congratulatory speech by John Cregan, chairman of Limerick GAA County Board, the Limerick hurling panel of 2022 was introduced. With two years of missed homecomings, clearly no expense was spared with flame shooters at both sides of the stage signalling each members arrival.

After well deserved celebration by the team and crowd, some members of the team treated fans to a sing song. Captain Declan Hannon was first up with his surprisingly well sung take on Caledonia. The captain clearly has talent both on and off the field. With barely a voice left after the previous night of celebrations, Limerick hurling manager John Kiely launched into a very hoarse version of Billy Joel's 'Piano Man'. Finally, a track which went down a treat with Limerick supporters, sports and conditioning coach wowed the crowd with 'Sean South From Garryowen'. 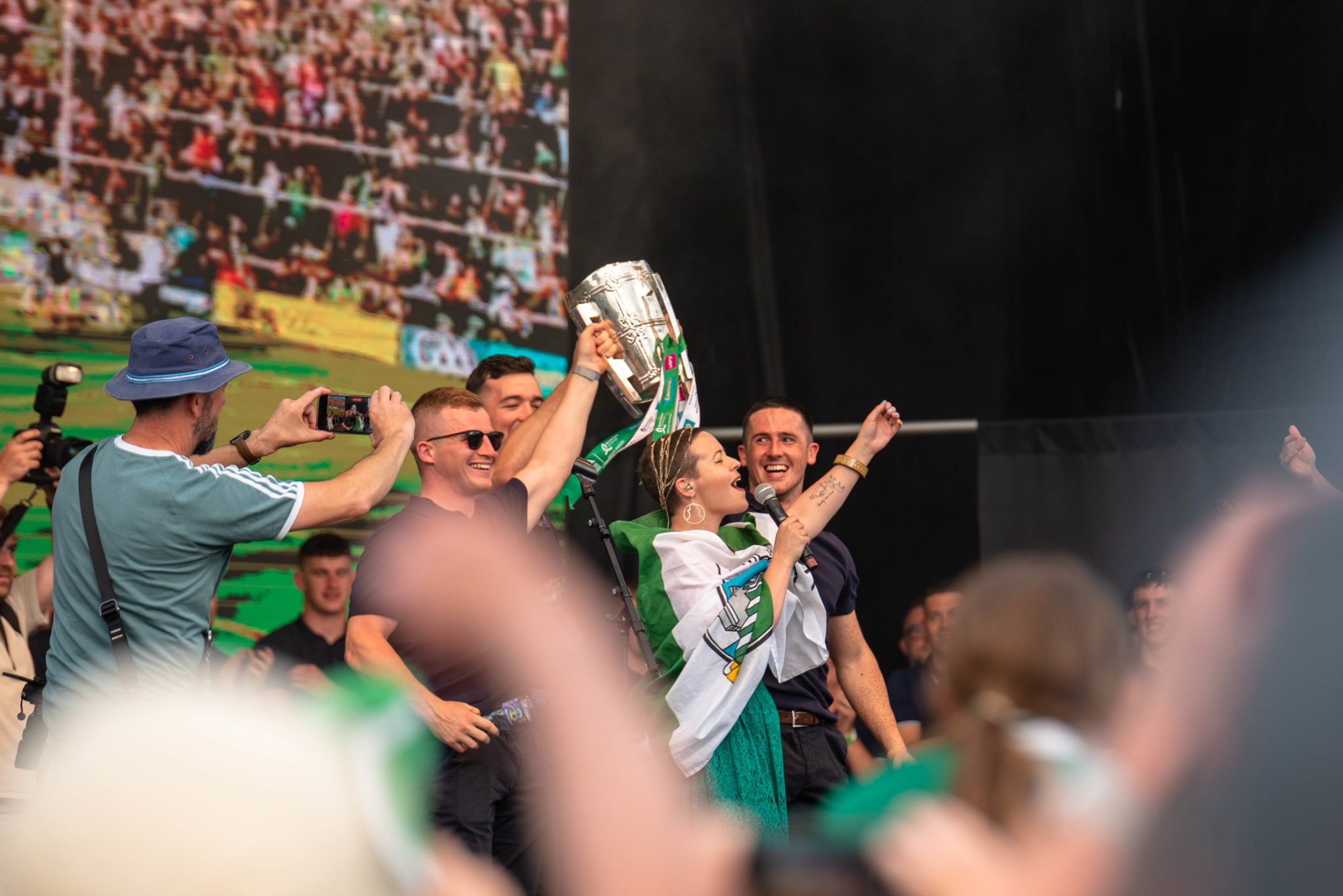 To conclude the ceremony, the team let the professionals get back to the music, with Emma Langford and Moncrieff taking to the stage for a final time to sing the Limerick hurlers team song 'Dreams' by Limerick band The Cranberries. Sporting a similar pixie cut to the late Dolores O'Ríordan, you can't help draw comparisons between Langford and The Cranberries' lead singer. The crowd hung on every lyric, singing along with the two artists 'til the very end.

Unfortunately reneging on Langford and Chaila's promise to shift the entire hurling team, it's fair to say that #ShiftFest2022 was still a massive success. Hopefully 2022 will see continued success for the Limerick hurling team so we can look forward to a similar event in 2023!