There was a huge buzz of anticipation, as we joined forces with Aloft Hotel, to present a special gig with the brilliant young Belfast prodigies, Dea Matrona. It turned out to be a very fine night indeed, in this landmark location...

Aloft Hotel in Dublin city centre lies in the beautifully historic location of the Liberties. Located alongside the up-and-coming art space Hen’s Teeth, the pink-accented hotel reaches up an impressive seven-stories. The swanky interior is complemented by the pink prosecco that is being poured in the lobby for guests, as they arrive for the gig.

Ushered into the elevator, beverages in hand, guests rise to the gorgeous rooftop vantage-point, for a sky-line view of the city.

As the crowd mingles, swooning over the amazing view, the stage stands ready for the Belfast-based outfit.

Dea Matrona began to gather momentum back in 2019, right before the pandemic hit. But even that woeful interruption to live gigs in Ireland and across the world couldn’t hold them back. Busking on the streets of Belfast, and garnering millions of views for their live YouTube performances of classic tracks, they were subsequently voted 'Most Promising Act' in the Hot Press 2021 Readers Poll, and starred on the Late Late Show, on RTÉ in March of last year. Most recently, they have been touring all over Europe with Eagles of Death Metal – a stint which has seen them sharpen their live set even more. 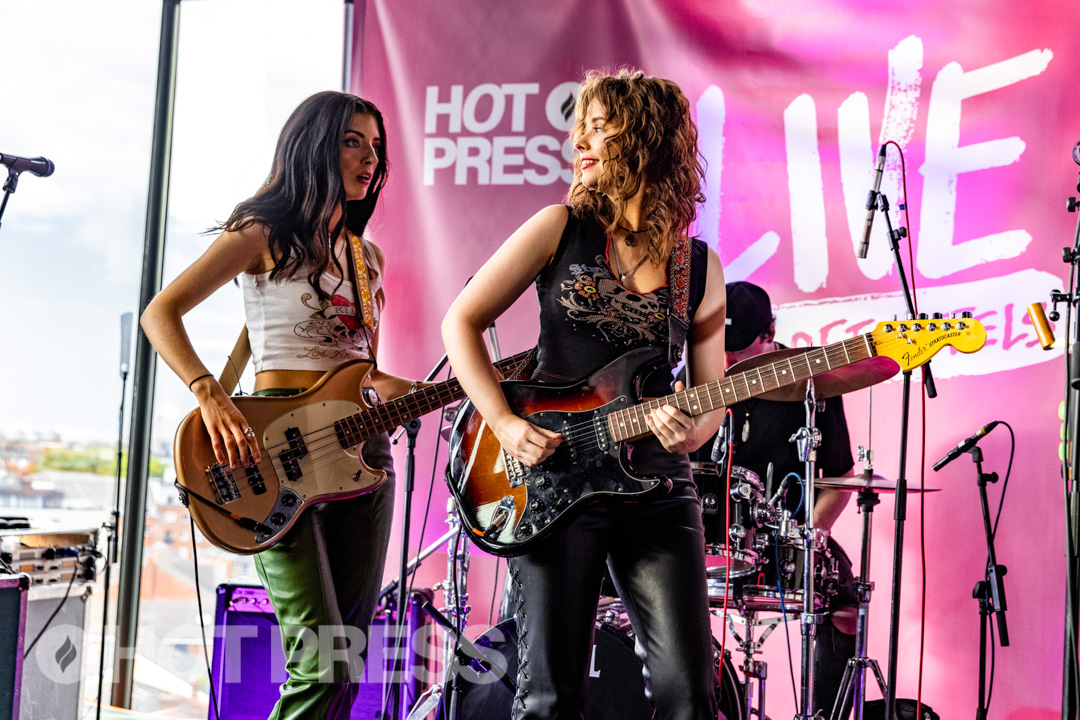 They have a unique twin-focal point in front-women Mollie McGinn and Orlaith Forsythe – both highly accomplished musicians, who merrily swap bass and lead guitar duties, as well as vocals, throughout their performances.

Former schoolmates, the duo look the part too, ascending to the stage in stylish outfits, leather trousers, colourful T-shirts, rock star hair and red lipstick all adding to the magnetism.

“What a venue, eh?” Mollie exclaims, gazing around her. “We came into the hotel earlier today to have a look and couldn’t believe it! It’s an amazing place.”

The powerful opening riff sets the tone, as they launch into ‘Just Wanna Rock’, an original song off their 2019 EP Away from the Tide. While the music has the gritty pulse of rock, the duo's strong vocals and elegant harmonies add an enthralling paradox to the mix. From the outset they engage with the crowd, encouraging sing-a-longs, handclaps, chants and dance moves. 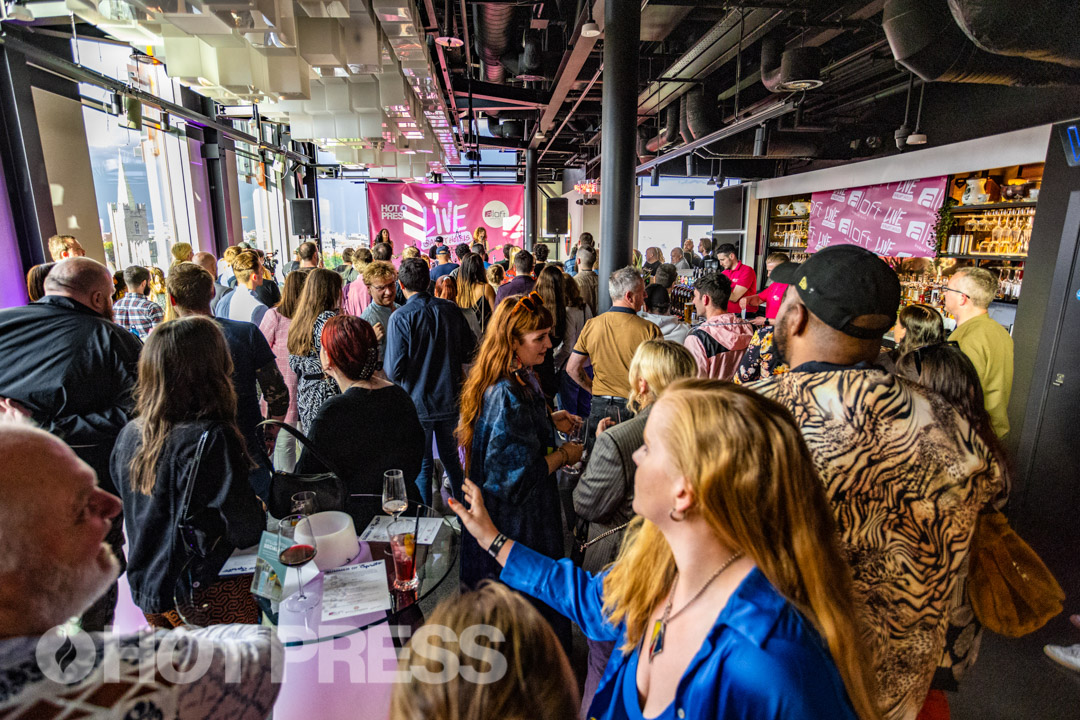 They have an increasingly impressive seam of original songs, playing ‘Stamp On It’, ‘Nobody’s Child' from their 2019 EP and the 2020 single ‘Make You My Star’ as the set progresses. They also deliver epic covers of Fleetwood Mac’s ‘Oh, Well’, Aerosmith's ‘Walk This Way’ (which, of course, was turned into a mega-hit by Run DMC) and Van Morrison’s iconic ‘Gloria’. The latter was initially recorded for Hot Press’ Rave On, Van Morrison series, and when Van the Man saw the cover he invited Dea Matrona to support him at the Millennium Theatre in Derry. Proper order, too!

Throughout their set, the friends swap guitars, deliver powerful solos, perform synchronised dances, and on occasion come together to sing into the same mic, Mick Jagger and Keith Richards-style.

There’s a riotous ending, and the duo disappear with the last echo of their instruments, returning to mingle with the awe-struck audience after their set. It may just turn out to be a moment to tell the grandchildren about! 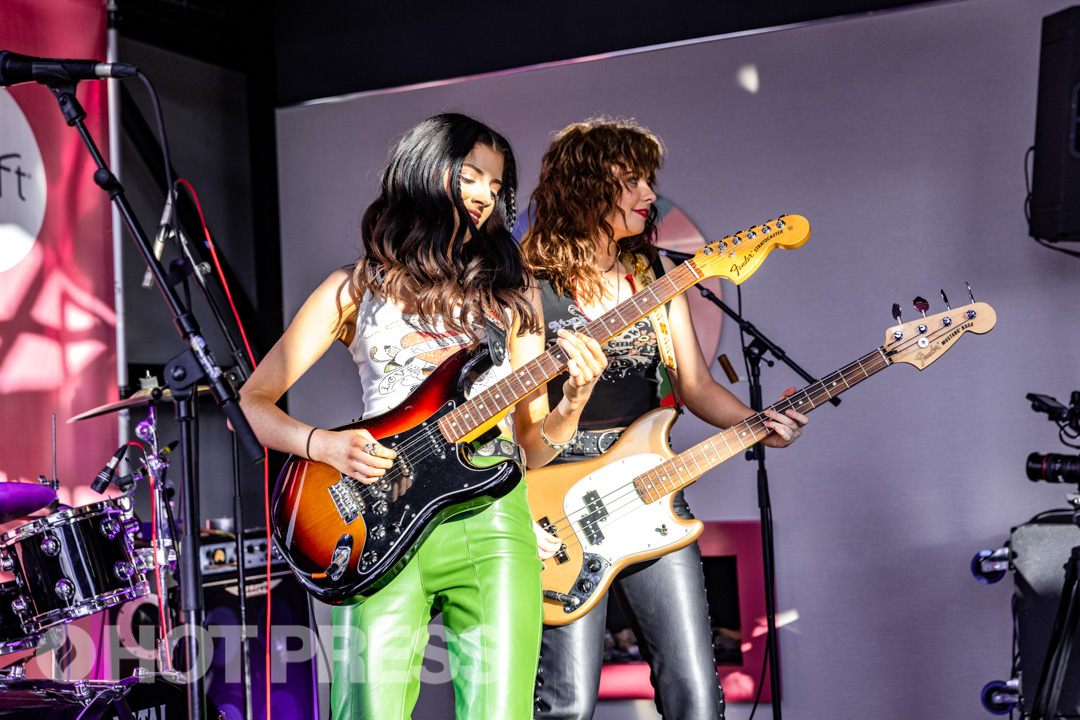 Dea Matrona have key festival dates ahead, starting with Rock Werchter Encore in Belgium on July 2nd, before they land at Indiependence in Mitchelstown, Co. Cork, at the end of the same month.

As for Aloft Hotel, Dublin City, a hugely diverse crowd was drawn to a gig boasting a beautiful view on the top floor, delicious beverages and food provided by Aloft’s head chef and a brilliant atmosphere. It was a very special occasion indeed.

A rainbow arced above the breathtaking balcony just after the music concluded, providing a magical end to the night.