I knew tonight would be great before I put my jacket on to leave the house. In fact, I knew as far back as 1988 – that can’t be right - when I took a chance on Temple Of Low Men after hearing ‘Into Temptation’ on the radio. They were great when I stood out in Marlay Park back in 2007, in a rain storm that Amazon tribesmen would tut and shake their heads at, as they supported Peter Gabriel and took their lives into their hands by playing ‘Weather With You' without a trace of irony. They were great again a year later when the Prince concert in Croke Park had been cancelled forcing Mr White and I to talk our way into the Olympia to watch this marvellous band taking requests. I knew because Crowded House are class and they never, ever let you down.

As he’s in the news, let’s mention Paul McCartney, who once said, ‘Neil Finn is the greatest song writer alive’, or ‘I wish I could write music like Neil Finn’. Turns out he didn’t say anything of the sort. McCartney, one of the most competitive men in history, who probably fights over the vegetarian equivalent of the largest pork chop at the dinner table even still, cleared all that up on a Facebook live chat but he did say he loves Finn’s songs, which is praise enough for any songwriter really. And why wouldn't he? Finn is worthy of mention in the same breath as Macca himself. He's that good.

Therefore I was in impregnably good form when I sat down for a pre-gig drink, and even an hour of ‘Rockin’ Roisin Dwyer showing me pictures of her dog could not dampen my spirits. Everyone was smiling as we walked into Trinity’s Cricket ground which is, allowing an honourable mention to the Iveagh Gardens, the best spot for an outdoor gig in the city centre – the crowd is just the right size, the sound is good, and the bar is easily accessible, although the price list does prompt a sharp intake of breath. Seven quid a pint? I mean, I drank a few of them, but I wasn’t happy about it.

As we were all standing around, feeling good about ourselves, Liam Finn, who “lost a game of rock, paper, scissors”, came out to warm us up with a few of his own songs. I’m not familiar with his work but it sounds like the melodic gene has been passed down fully intact.

We’re not waiting long after before his Da Neil, his brother Elroy on the drums, and “uncles” Mitchell Froom on keyboards and Nick Seymour carrying his bass join him on stage. Before they hit a note at all they’re looking marvellous, Liam all in red, Nick all in black – a fetching kilt based ensemble - and Neil in a white suit borrowed, possibly, off the man from Del Monte, and a striking hair do that more than slightly resembles one of Tina Turner’s old wigs. Resisting the temptation to give us a few bars of ‘Private Dancer’ they instead kick off with ‘Distant Sun’. Finn’s voice is as clear as a glass bell, the ‘Ahhs’ of the backing vocals are perfect, and Dwyer beside me, who had promised she’d start crying if they opened with this one, is welling up. It’s just one of their many perfect songs and it’s merely the opening number. 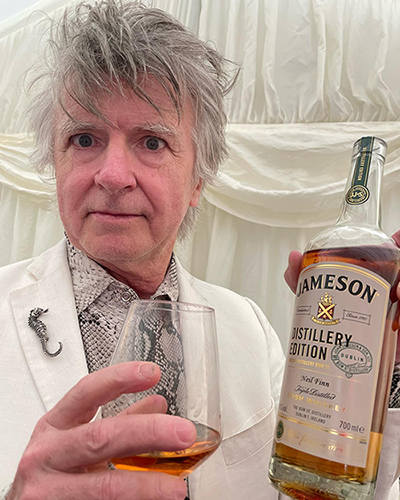 Neil Finn enjoys some Dublin hospitality. (Taken, with thanks, from the Crowded House Facebook page.)

If the aforementioned McCartney had come up with the melody over a diminished chord, octaving bass, and effortless guitar break combination of ‘Nails In My Feet’, also from 1993’s Together Alone, we’d all be celebrating it. The “savage review” in the lyric may have left Finn gasping, but he should be all right with this one. The younger Finn appears to be playing a guitar with more strings attached than my divorce settlement as his father juggles a few consonants to change the title of recent single ‘To The Island’ to ‘To The Ireland’ and gives us an unexpected few bars of Mary Hopkin’s ‘Those Were The Days’ – original single produced by McCartney, it’s all connected – before we get the song itself, featuring a beautiful, note-perfect choral breakdown. Did I already tell you what a great band they are?

Mr Finn then compliments the venue, posits that Seymour’s bass might raise some dust off the Book of Kells, hopes he’ll stay in “fucking tune”, accuses his Aussie mate of trying to gentrify Sligo, and asks if we brought our singing voices, before we all prove that indeed we did during the wonder that is ‘Fall At Your Feet’. Finn, the old pro, knows he’s on to a good thing and adds an acoustic sing-along coda with an impossibly big “FAAALLLllll” note where we all temporarily join the band. ‘Pineapple Head’ sports sublime vocals and a Roger McGuinn-esque guitar solo from a band as tight as a throat in a sandstorm. There’s some banter about Finn taking the Trinity piano course – actually the London one but never mind – and Seymour’s restaurant etiquette before the opening chord of ‘Don’t Dream It’s Over’. Finn stops and dedicates it to the women of the USA who are having their freedoms destroyed. It’s a noble gesture and, as he says himself, “it’s just as well I stopped” because he was in the wrong key. The song was of course a massive hit - a song so good that they can add a bit of Everly Brothers at the end and it’s hard to see the join - that introduced them to the world back in 1986 and when Finn emphasises the “you know that they won’t win” line, everybody knows who the 'they' currently are.

“How lucky we are to be experiencing this Dublin evening with a rainbow.” He’s not wrong. The app on the phone told me there was an 80% chance of rain but the odds have worked in our favour and the refractive/reflective optical display in the sky only adds to very-pleasant-indeed atmosphere. ‘When You Come’ is another almost inconceivably good tune and they’re really only showing off at this stage. I don’t know much about New Zealand – far away, lots of sheep – but surely Finn is worshipped as some class of melodic god by its population?

The band are “having a fucking god time” so there’s no panic about the trouble Neil is having with his peddle board and he takes the gentle piss out of Marcus the roadie as he tries to remedy it. Froom essays a bit of Randy Newman while Finn introduces the band, with special mention of Seymour’s New Zealand tartan. It’s all black, you see, which draws a few boos from the rugby people in the audience, more of whom anon. Marcus gets the gear back on track and Finn celebrates by ramping up the electric guitar during a rockin’ out ‘Black And White Boy’.

The main man even manages to make casually tying his shoes look cool, and he then throws out the old Dublin audiences are the best line before the one-two combo punch of ‘Private Universe’ and ‘Four Seasons In One Day’. Lesser bands – and they’re nearly all lesser bands – would sacrifice their first born for a tune even half as good as one of these. Elroy has moved to the front of the stage now, using brushes on a single snare, while his Da lets us do the work on the chorus and it occurs to me that even if there were a complete power failure, this great gig would probably just carry on regardless.

‘Too Good For This World’ is, appropriately enough, dedicated to David Bowie “because everything got fucked since he went”, ‘World Where You Live’ has another chorus that they should be teaching in school, and while ‘Whatever You Want’ may not be their greatest song, it hardly matters because it’s followed by ‘Weather With You’. Hark at the mysterious power of a great song, albeit one with lyrics that don't make an awful lot of sense, for it even managed to, temporarily, shut up the rugby-players-gone-to-seed – where did they get the ice for the pints of cider? - who appeared to be having their annual convention beside us complete with loud debate. Whatever, Finn united us all by constructing a spiral, Mexicanish, half-arsed/glorious wave out of the crowd. An aside here, Seymour may have thought he’d get away with donning a frankly ridiculous hat, a nightmarish combination of Viking helmet and gimp mask, for the duration of their most famous song, but we saw it and took note.

“You’ve been magnificent, Dublin. I knew you would be!” Finn gratefully hollers before they finish the main set with another delight from his seemingly-endless supply, “Something So Strong’. They take their bows and head off, but we knew there’d be more, even as curfew approached. Finn sits alone at a keyboard centre stage for a delicate run at Splitz Enz’s ‘Message To My Girl’. The band re-join him for ‘Chocolate Cake’ which sends Dwyer beside me into some class of religious freak-out as Finn gives it a bit of Chas N’ Dave on the electric Joanna and son Liam leans over his shoulder to add a third hand to the ivories. Finn even, gently, kicks over the piano stool like a polite Jerry Lee Lewis. A surprise, but unsurprisingly great, cover of Bowie’s ‘Heroes’ starts off with Finn’s keyboard before that guitar line comes up. Neil then gets the feeling, grabs the microphone and jumps away from the keyboard, managing to pull the whole thing over as he tries to move to the front of the stage. He doesn’t give a monkey’s about the instrument as it crashes to a heap, saying after that “this is one of the best things that’s happened on the tour so far. I’d be distraught if that was a real piano, but that’s a piece of shit!”. He’s too busy singing his arse off to care and every voice in the crowd joins in. It’s pretty magnificent. Froom’s organ carries the closing ‘Better Be Home Soon’ and Seymour sends us out the gate with a heartfelt, “Thank You Dublin, I’ll always love you.” We love you too, pal.

As I enjoyed a post-show drink or two, all those marvellous melodies swam about my consciousness. Crowded House really are tremendous, and if they’ve ever made a bad record, I have yet to hear it. I mused on like this for another hour as I sat there, smiling at my good fortune, but let me leave the last word to my friend Darren Cahill, a sound man in both profession and manner. “Great band, great songs. That’s all you need.” I can’t say fairer than that.

Apologies for the stock photo, I was too busy having a good time to get my phone out. If you'd like further proof of how marvellous The 'House are, here's an Interview I did with Nick Seymour. He's a lovely man. Their last album's good too.