Conan Gray brought his typical brand of vulnerability and humour to connect to his Irish fans.

The 3Olympia Theatre plays host to a multitude of acts each year, always welcoming Dubliners into the decadent concert hall. Monday night was no different for the first of two Dublin shows on The Conan Gray World Tour 2022.

The grand venue became an inviting haven for Gen Z-ers to let their guards down and connect with the indie pop tracks, with the help of course, of the 23-year old pop maestro’s charismatic disposition. Gray and his audience share a particular understanding with dialogue that only those of his similar age group would truly be able to understand.

Opening the show was the Australian singer and rapper, Mallrat (full name Grace Shaw), who wore a leather butterfly top with silver studs, a plaid skirt adorned with stuffed plushies that dangled from the belt, and knee high black leather boots to match.

Having just released an album by the name of Butterfly Blue after working on it for four years, Mallrat came to introduce herself and her music, and did so successfully, adequately pumping up the crowd with dance tracks and slower tunes alike.

Following her performance came a roar from the crowd, knowingly chanting “CONAN! CONAN! CONAN!” until finally, the venue went dark and a large screen at the back of the stage lit up white with a projected black crow in a birdcage. 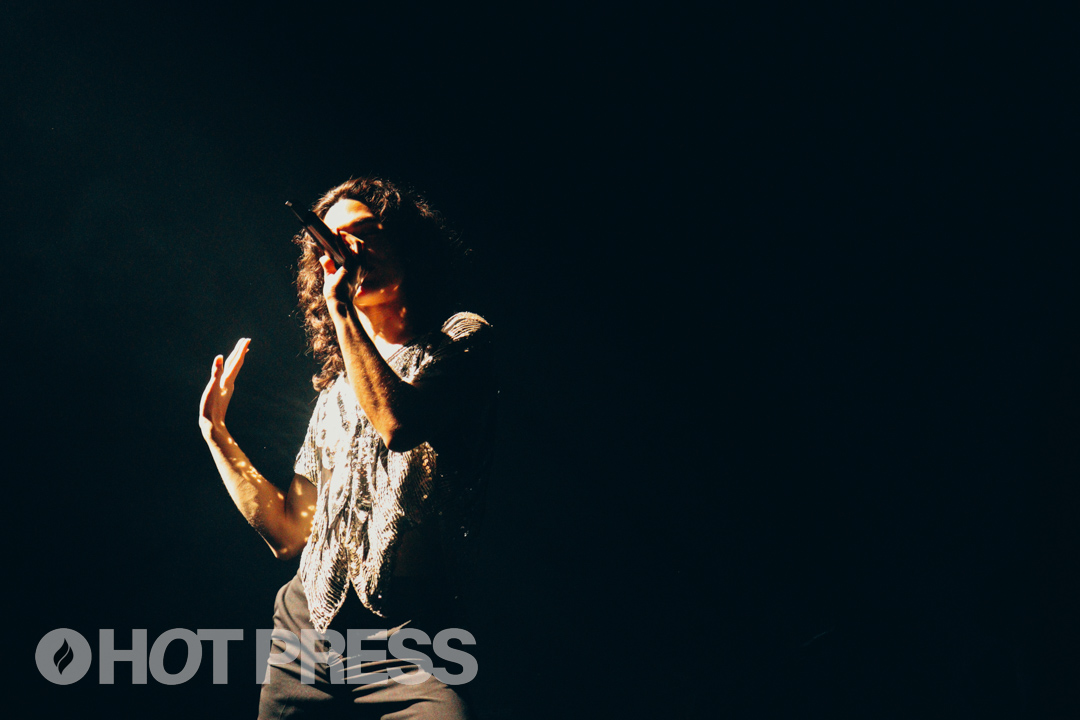 All of a sudden the screen split down the middle and the headliner himself walked down-stage to kick off the night with ‘Wish You Were Sober’ from his 2020 album, Kid Krow. Gray initially rose to fame after signing a record deal with Republic Records in 2018, where he released his debut EP Sunset Season. Prior to this project, the Lemon Grove-based artist garnered a sizeable, beloved audience via YouTube vlogs.

Cue the song ‘Comfort Crowd’. Centred around human connection, the venue came to life during the track. Audience members in all corners of the room joined in to belt out the reassuring words.

As Conan made a dramatic exit offstage – the first of many throughout the night – a projection of an iMessage chat addressed to “Online Love” appeared while the song played over the speakers. Throughout the performance, several images were projected onto the screen from geometric shapes to lyrics to drawings. 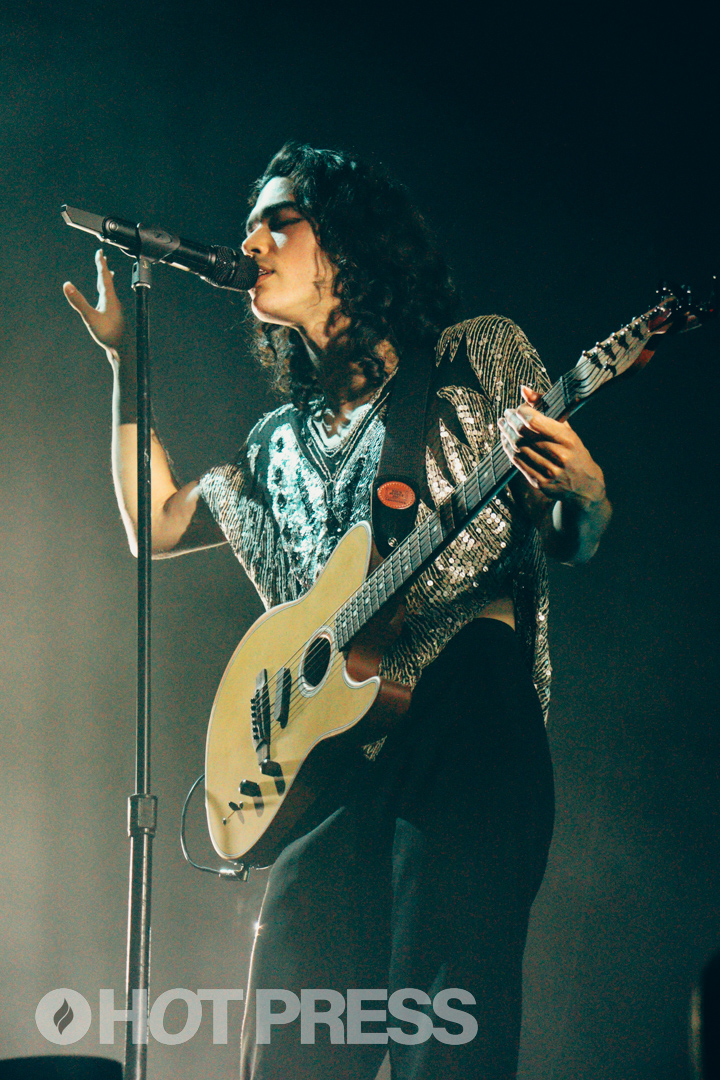 Before you knew it, Conan was back onstage to perform ‘Astronomy'. Flashlights emerged from the crowd, summoning the stars into the quaint venue.

“Thank you guys,” whispered Conan into the microphone, “This is so cute!”

The most engaging aspect of Gray is his casual nature when it comes to speaking with his fans. He makes every effort to connect with everyone who comes to see him perform. Looking up towards the steeply stacked seats in the top tier of the 3Olympia Theatre to the people tucked away into the side boxes, he waves, reads signs, and tells stories about his life.

The next song, ‘The Cut That Always Bleeds,’ was equally diaristic. Sitting on the floor under a simple spotlight, Conan filled the hall with tales of teenage heartache and toxic relationships.

“Guys. This is SO Normal People of us.” said the pop star in reference to the hit Irish drama. The rawness of his lyrics and haunting vocals left viewers in an emotional trance.

The entire performance was a theatrical affair—particularly the moment when Conan ran off stage and played a recording as though concertgoers were accidentally overhearing him ranting to someone backstage.

“OMG. This is such a disaster! Someone told me that Heather is here tonight” whined Conan’s voice, foreshadowing what would surely come later. The crowd lapped up the drama. 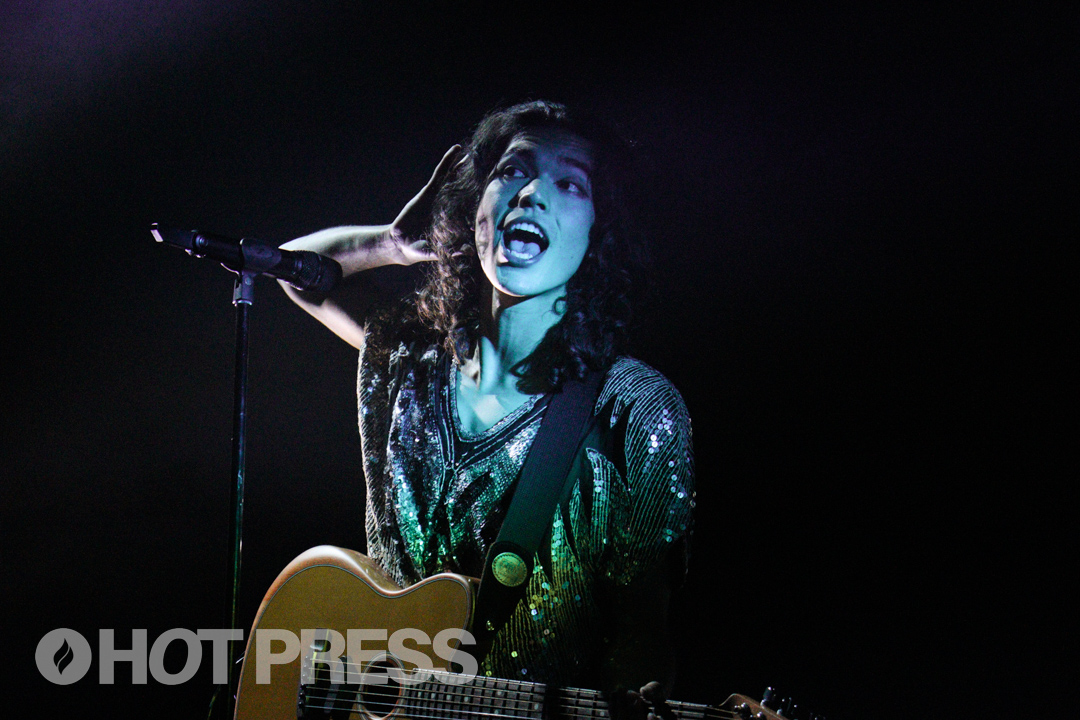 He played a few more songs and during the iconic tune, ‘People Watching,’ Gray ran down a set of steps placed strategically on stage right and stormed the barricade holding out his hands and singing to those in the front rows. He even held hands with one concertgoer for the whole song before returning back to his position on stage, surely making her entire night.

“This is my very last song and I’m definitely not gaslighting you Dublin,” teased the Gen Z icon.

Conan performed hit single ‘Maniac’ and once again made a grand exit after the song was over. Taking the hint, the audience went wild, fully knowing that another song was yet to come.

Breaking through the centre of the parting white screen was the one and only, Conan Gray–but this time dressed in a navy blue sweater vest and coordinating navy and white plaid skirt with a yellow guitar strung across his body.

The last tune for the night was the heartfelt, hit song, ‘Heather,’ to which the crowd tossed roses for at the end.

The breakout singer-songwriter thanked his dedicated Irish friends and waved goodnight to the Dame Street venue.