Launching a new festival is never an easy undertaking and doing so for Irish music-lovers who have been starved for festival mischief and mayhem for two years could have put even more pressure on the organisers of Beyond The Pale, the new 5,000-person boutique festival that had its first outing in Glendalough on Friday, June 10 through Sunday, June 12. But the festival line-up was fantastic and as ever, Irish festival attendees made the weekend with their great spirits and enthusiasm, keeping the weekend gloriously fun - even as the festival navigated some teething problems. 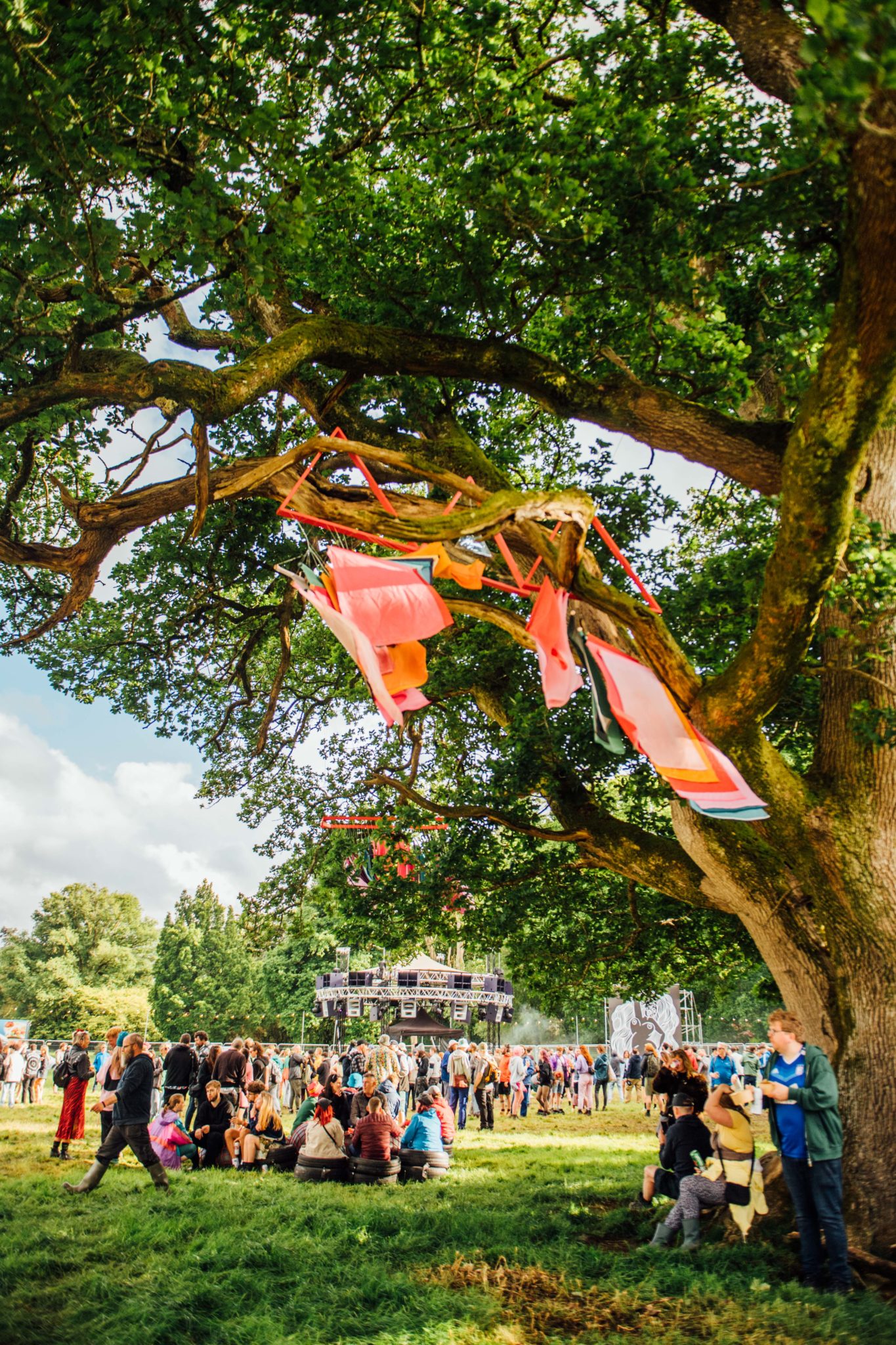 Beyond The Pale, Wicklow. Photo by Ruth Medjber

Beyond The Pale was held on a small site in Glendalough, with four main stages – the main outdoor stage, Beyond The Pale; a smaller outdoor stage, The Big Romance, for DJ sets; and two tents, Selective Memory and Strawberry Fields which held a combination of bands, DJs, stand-up, cabaret and performance. Food trucks and Craft Cocktails stands were dotted across the site, with a designated food area that not only had a Beyond The Plate food stage with a program filled with talks and panels, but a variety of deliciousness, including Filipino street food Bahay, AA’s Caribbean, veggie treats from Bish Bosh, glorious tacos from El Milagro (a highlight) and the Dublin Burger Company. The site also featured a separate family-friendly area with quiet camping and entertainment for kids, Cosy Camping for those looking for a hot shower, and Boutique Camping for those who enjoy the glamping lifestyle. The intimate site meant that everything was within easy walking distance, meaning you are never too far from your friends, sustenance, or some great performances.

Paradise Cabaret provided some fun and silliness on Friday night in Selective Memory, with acrobats, magicians, dancers, and an unforgettable appearance from Donald Rump (trust me, I’ve tried to forget), getting everyone in high spirits before we moved over to Four Tet, who put in one of the weekend’s best shows at The Big Romance, where the crowd took advantage of being able to surround the entire circular stage, and dance to his magical, ambient techno like we hadn’t in two years. 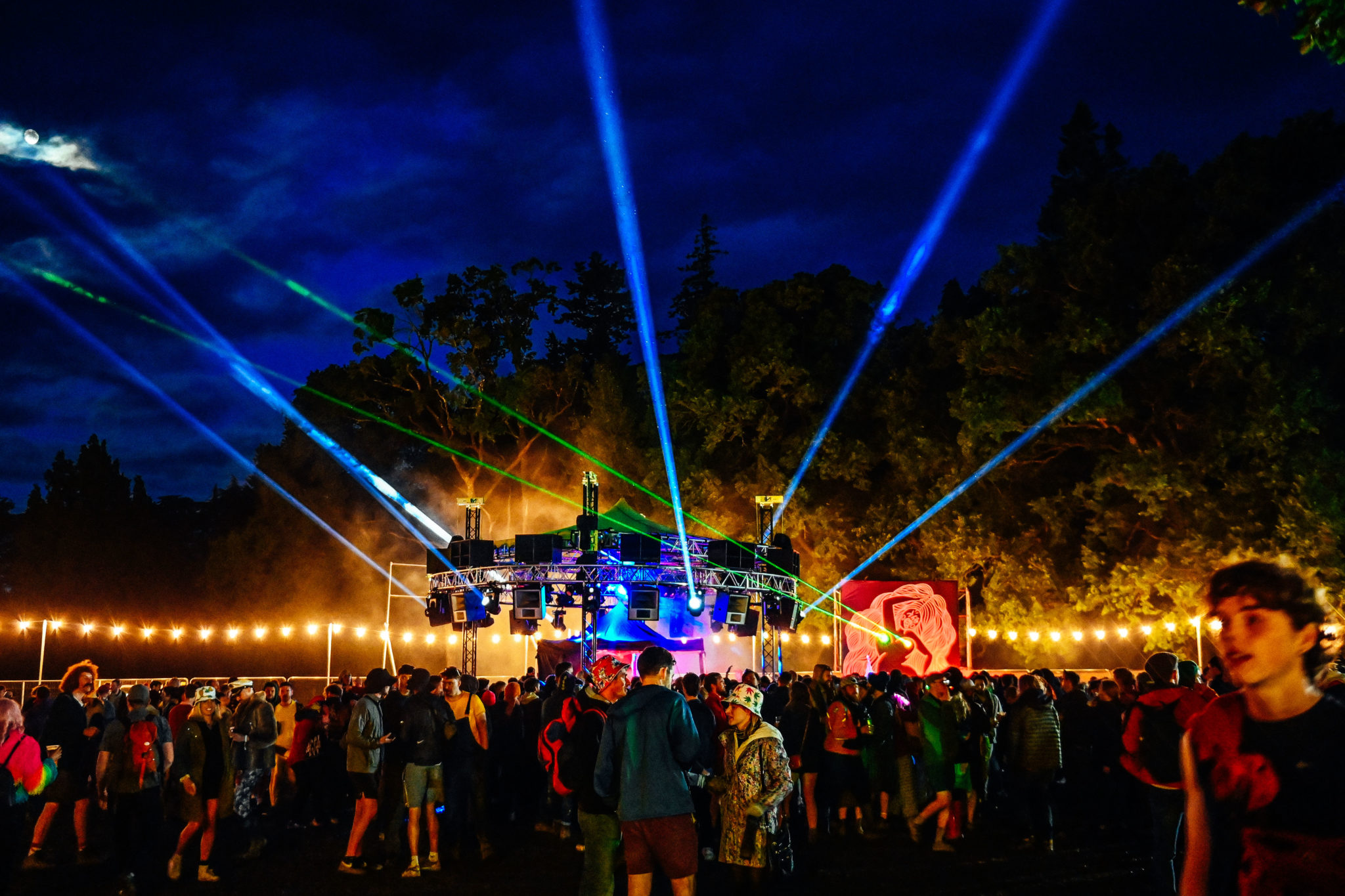 Beyond The Pale, Wicklow. Photo by Ruth Medjber

For those who were up bright and early on Saturday morning, offerings of yoga, sound baths, foraging walks, matcha ceremonies, and meditation played into the festival's beautiful setting and allowed mindful participants the chance to ease into their weekend with grace and full hearts. Some of us decided to instead sleep in and start the day off with more tacos from El Milagro. To each our own path. Saturday’s afternoon line-up was beautifully calibrated to slowly build up energy, letting audiences relax with soothing performances from singer-songwriter Christian Wethered and the soulful Loah on the main stage, while those who already had their Wheaties could go dance around to Kid Karate and Cruel Sister in Selective Memory.

Saturday’s afternoon and evening line-up suffered from some technical difficulties and resulting delays, with John Francis Flynn’s set on the main stage starting later than planned. However, the folk singer put in a beautiful performance, enrapturing the crowd, with his modern take on trad working wonderfully in the afternoon, as last night’s revellers were slowly regaining their energy and getting ready to go wild again for another night. In Selective Memory, Glass Ensemble were putting in a beautiful performance performing a mesmerising selection of Aphex Twin songs, with their unique blend of orchestral chamber music, electronics, and hypnotising visuals making for an exquisite afternoon offering. Back on the main stage, Soda Blonde followed John Francis Flynn though they were again delayed due to technical difficulties, but singer Faye O’Rourke’s charisma and energy got the crowd going. The deals meant that Bonobo, aka Simon Green, took to the stage later than planned, and some more technical issues meant there was a brief interruption to the set, but with his relentless energy and incredible light show, all was forgiven. 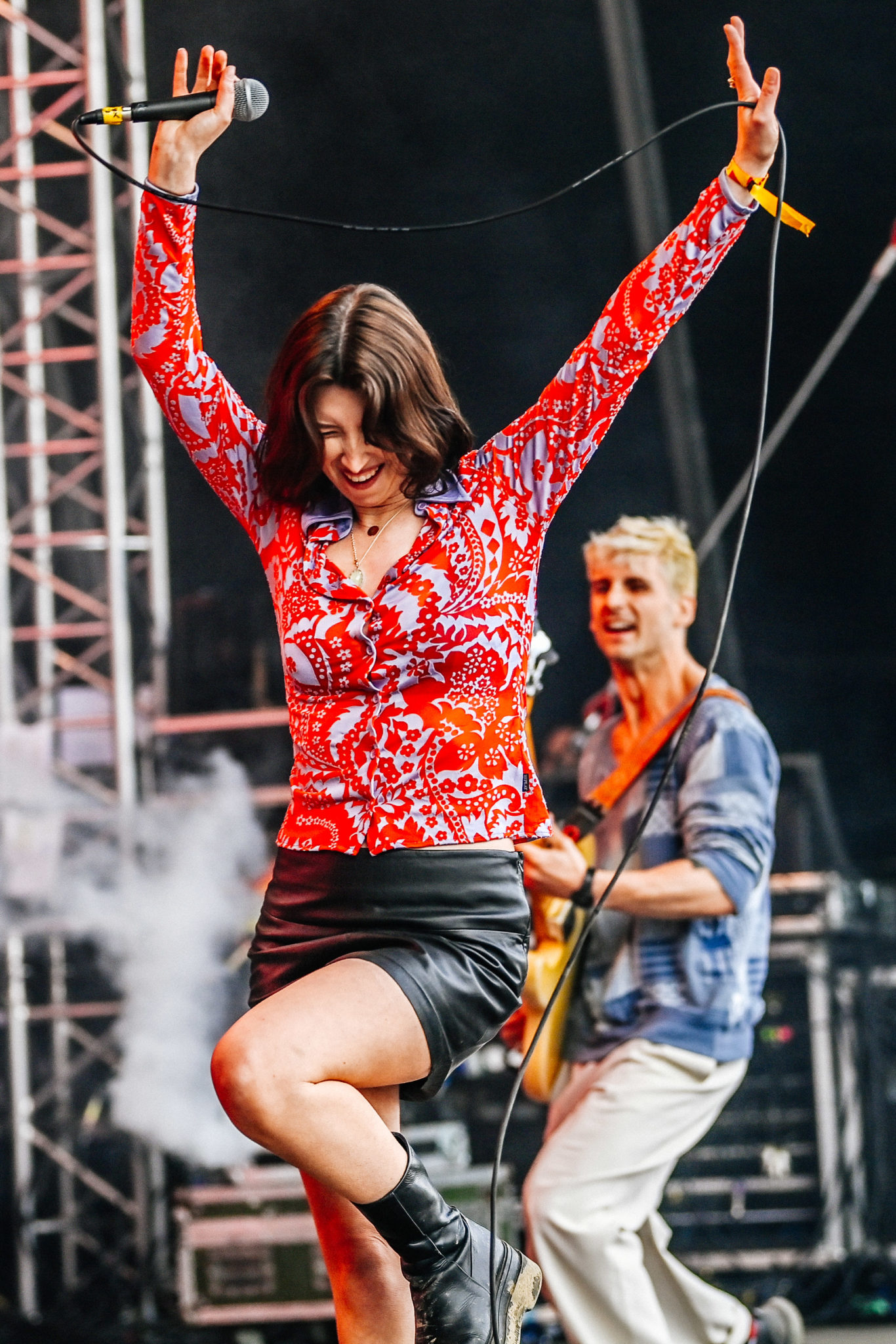 Soda Blonde at Beyond The Pale, Wicklow. Photo by Ruth Medjber

(A shout-out to Dublin-based A.V. company Algorithm Productions, who provided a lot of the creative visuals for the festival, elevating the experience and heightening the ambiance.)

Some minor issues arose off-stage too, as in the Cosy Camping site, there was some grumbling overheard about repeated issues with the on-site showers which appeared to be closed more than they were open, and a lack of the saunas that were advertised in the €60-per-person add-on upgrade. Though the festival was advertised as being cash-free, some of the vendors had issues with their wi-fi and card-readers on Saturday; issues which were largely fixed by Sunday but could have been easily rectified with some on-site ATMs.

Sunday’s afternoon line-up featured a host of poets and performers including Stephen James Smith and Emmet Kirwan’s Dublin Oldschool. The weather behaved itself, which allowed the crowd to regain their energy by lazing around some of the site’s beautiful oak trees. Sadly, a case of Covid prevented Soccer 96 and The Comet Is Coming from playing on Sunday, but there were still plenty of gorgeous acts to enjoy, including the ever-wonderful Lisa Hannigan and the brilliant Portico Quartet, fresh from their performance at the Hidden Door Festival. The Mary Wallopers got the crowd going on the main stage on Sunday evening, with everyone in the crowd dancing like wild things to the Dundalk folk group, and even a few brave crowd surfers being carried around by the irrepressible audience. Over in Selective Memory, Kerala Dust’s blend of jazz, electronics, and psychedelic visuals was a rapturous treat, with unexpected and updated covers of jazz classics like ‘St. James Infirmary’ proving irresistible. 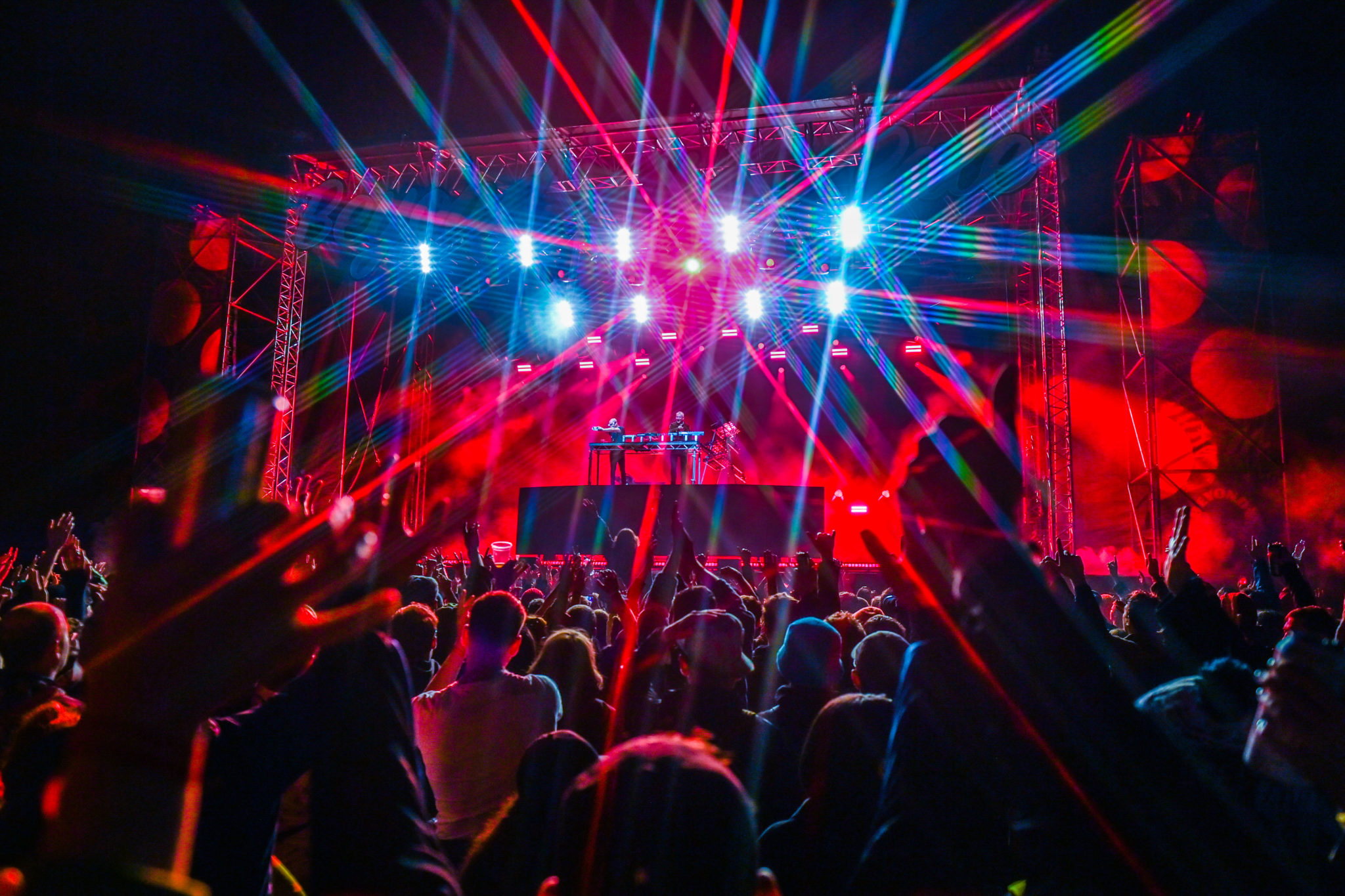 Orbital at Beyond The Pale, Wicklow. Photo by Ruth Medjber

On the main stage, James Vincent McMorrow joked how odd it was for the soulful singer to be on stage before Orbital, but he put on a great and game performance, noting that he had made some special mixes of his songs just for the festival to make them more dance-friendly. “It’s like when you’re listening to something beautiful in the shower, and you’re both dancing and crying – that’s what we’re going for!” he quipped. Energised performances of ‘Rising Water’ appeared behind his now beloved cover of ‘Higher Love’ and ‘We Don’t Eat.’ McMorrow then gave over the stage to Orbital, who were interrupted by those pesky technical difficulties, and spent a few minutes chatting to the crowd, but ultimately ended the festival with a great performance, sending the revellers dancing off into the night - either back to their tents for a night’s rest or towards their journeys home. Either way, it’s clear that Beyond the Pale is set to be a new summer staple on the Irish festival scene, and with some organisational honing, sure to be an annual highlight. 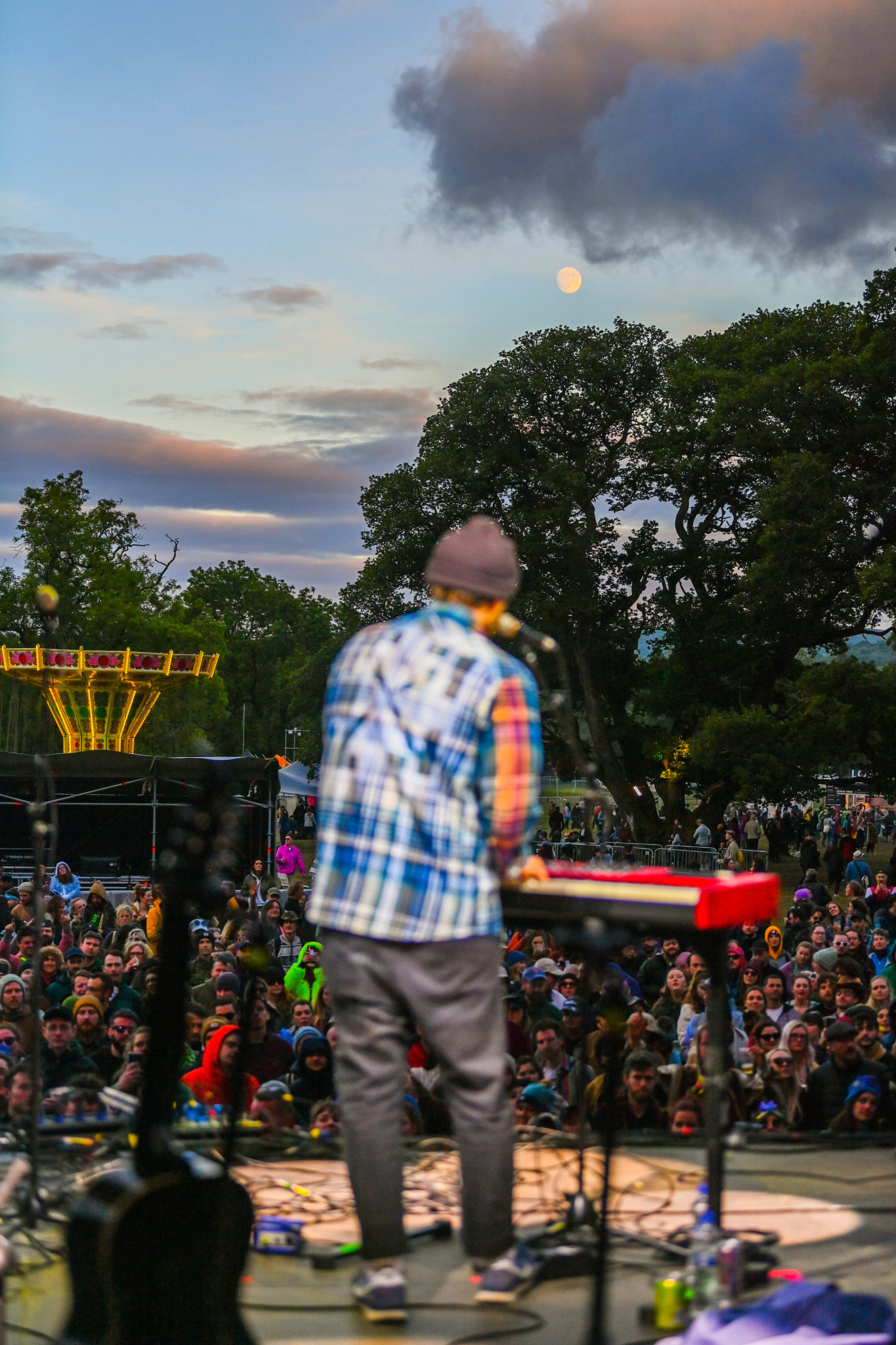 James Vincent McMorrow at Beyond The Pale, Wicklow. Photo by Ruth Medjber