49th & Main are among the hottest prospects Ireland has produced in years. They more than lived up to their reputation as brilliant performers last night, during the third instalment of [email protected], presented by Hot Press.

"The night is young, but so am I... Ain’t gone be here too long, best enjoy the ride!" It was more than half-way through their set when 49th & Main, the Kilkenny indie-pop duo who are making major waves internationally, launched into their hit 'Catching Eyes' - and the expectant crowd went completely wild.

Best enjoy the ride is right!

Producer Ben O'Sullivan and vocalist and multi-instrumentalist Paddy King took to the stage at Aloft Dublin City in the Liberties last night for an intimate, Hot Press-curated gig all the way up on the 7th floor – the sparkling lights of the gorgeous Dublin skyline glowing outside. The duo were following in the footsteps of Malaki and Dea Matrona as part of the [email protected] series, presented by Hot Press.

From the off, the boys seemed to be enjoying the ride as much as the audience. The gig was a feast of high-energy tunes, smart dance moves, classy Movember moustaches and occasional knowing winks and nods. Make no mistake, 49th & Main lived up to their reputation as brilliant performers. In fact, they were impressive in every way, chatting warmly to the audience and establishing an instant rapport. 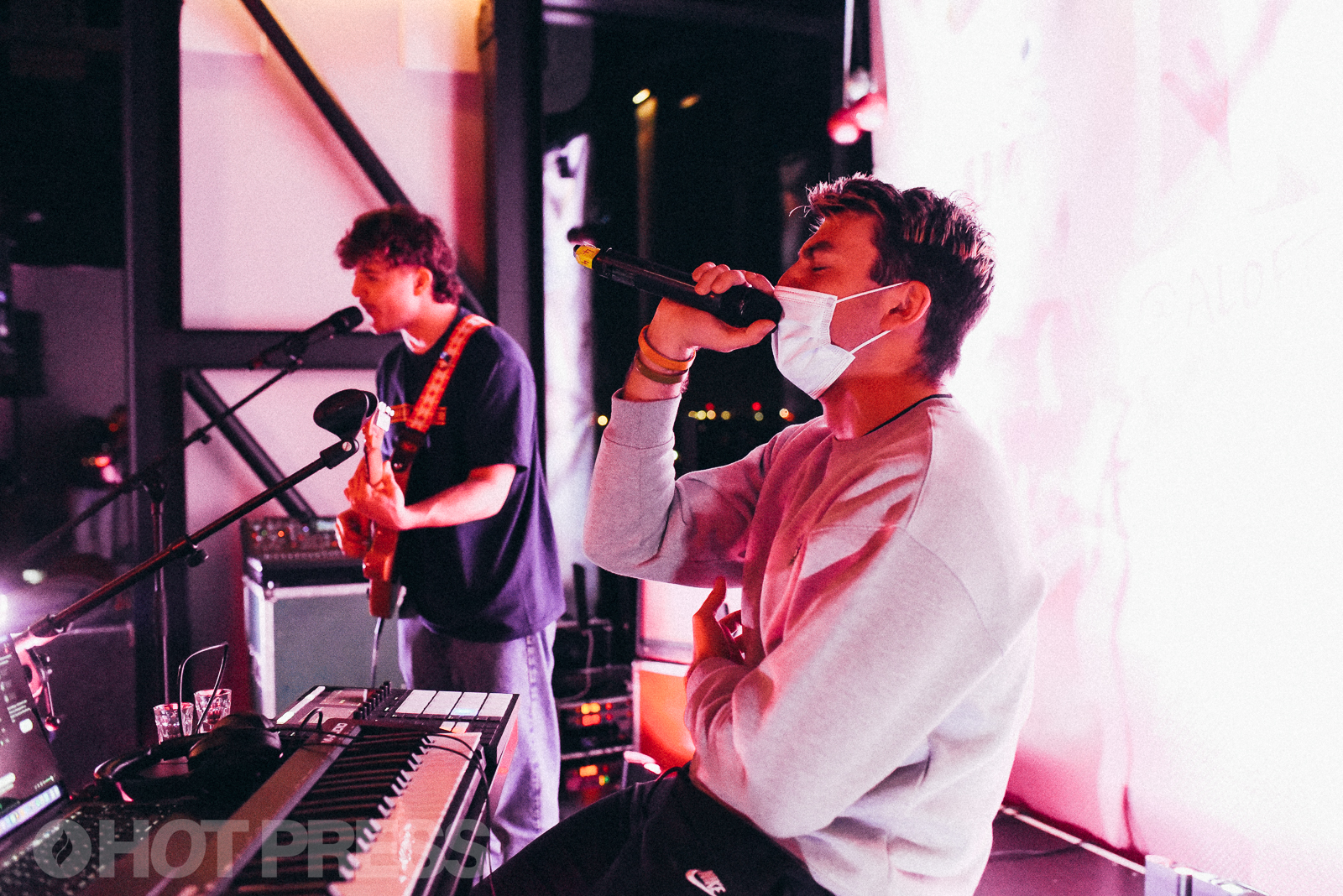 "How are we all feeling?," Ben O'Sullivan shouted by way of an opening salvo. "It’s a pleasure to be here!" He handed out Fireball shots to two lucky fans in the front row - and then it was straight into the music.

'Believe In Love' – a recent single – is a warm, uplifting track based around infectious electro-pop beats, saxophone melodies and harmonised, warped vocals. That was followed by the groovy, upbeat, 'Human Condition'. With raw lyrics like "Cause we all say things we know we shouldn't... Always feel so much and wish we couldn't... Every dumb mistake is dumb just let it out," you can tell that these guys know how to stitch things together lyrically. 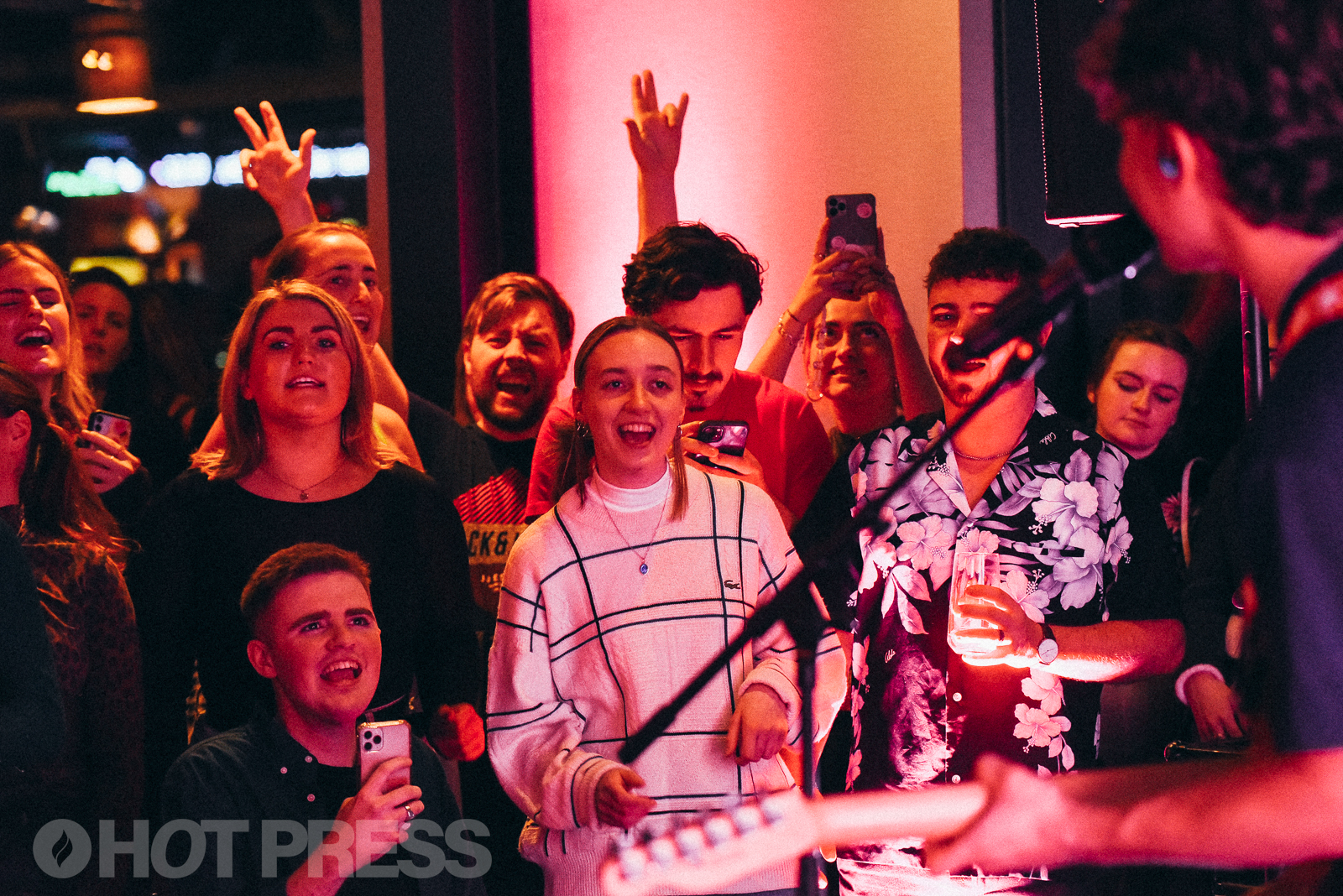 Next up was the brilliant 'Don't You Like It', which has racked up over five million streams on Spotify - contributing to the duo's enormously impressive 40 million streams on the platform since 2020. No wonder they had the crowds eating from the palms of their hands at music festivals throughout the summer, including Glastonbury and Electric Picnic.

"Do you like it?," Paddy King asked the crowd as the intro started. They did – and then some! Everyone was having a marvellous time, dancing along, shaking their hips, waving their arms, and singing as loudly as they could.

49th & Main kept hitting the target: 'Streetlights', 'Never Gonna Stop', 'Dillinger', 'No Sleep' and 'I Want You' were all executed with aplomb, building a party atmosphere, which got even more celebratory when – during 'Catching Eyes' – King jumped off the stage into the crowd, to the delight of their fans.

The duo had another surprise in store for us when – towards the end of the set – they unveiled the unreleased track 'Loving You', which they had teased on YouTube earlier this month. 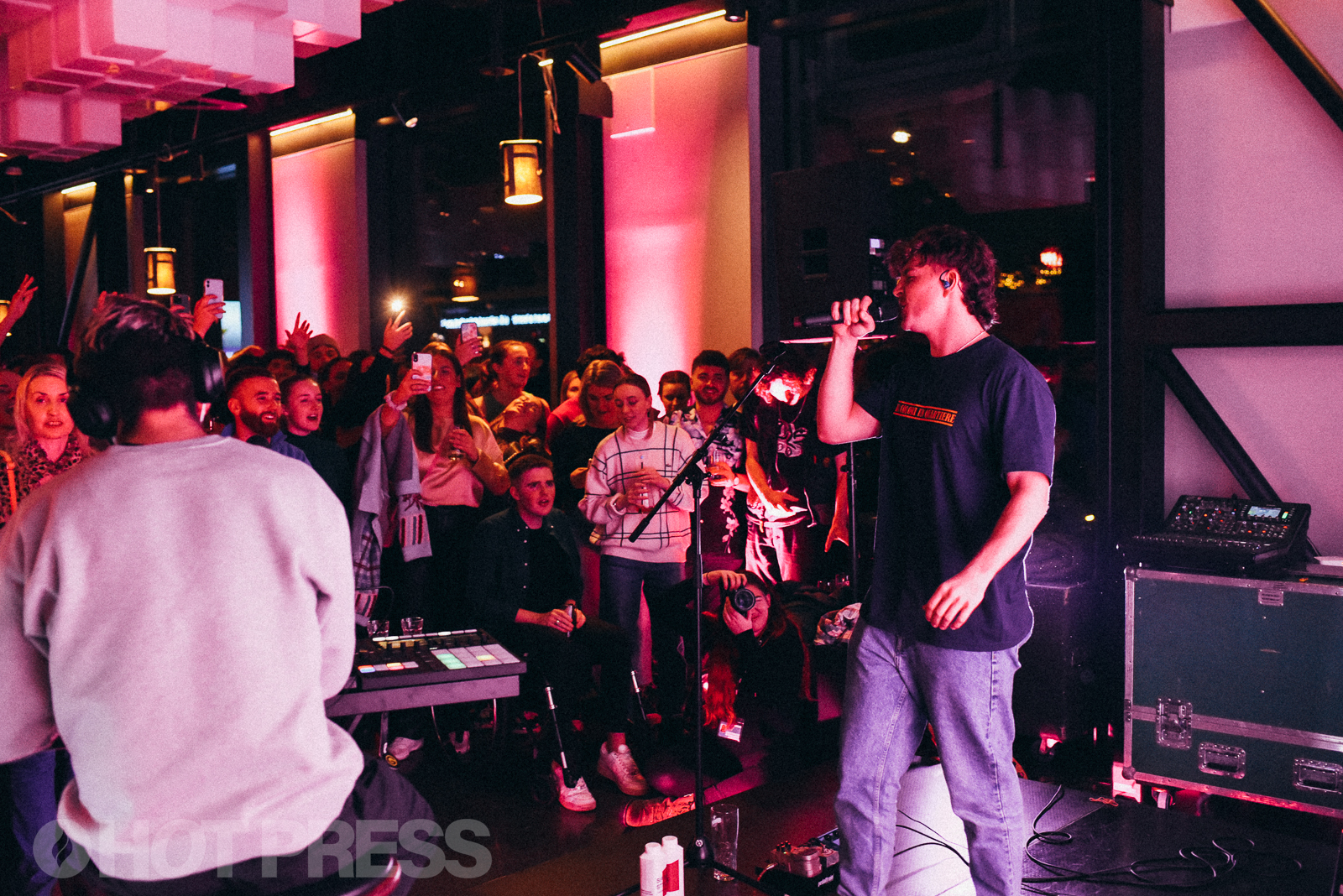 The night drew to a close to the vibrating beats of 'Up To Something', which saw Ben O'Sullivan jump up from behind his keyboard/sample board/iMac setup and pull off his mask to reveal a striking Movember moustache. (Ben had been wearing a protective mask for the majority of the gig, as he is immunocompromised due to suffering from the rare blood disease aplastic anemia).

The last line reverberated around the top floor of Aloft Dublin City, to the sound of a cheering crowd, their own phones held aloft to capture the moment.

Truth is that the boys couldn't have been less "on their own" tonight. An adoring crowd in a packed Aloft lapped up every shift, shape and move, as 49th & Main confirmed exactly why they are real contenders for global mega-success. A brilliant gig.

• 49th & Main are setting off on their highly anticipated The Underqualified Tour in December, featuring numerous shows in the UK, as well as a string of Irish dates at Cyprus Avenue, Cork (December 15); Monroe's, Galway (16); Dolan's Warehouse, Limerick (18); Limelight 2, Belfast (21); and an already sold-out show at The Academy, Dublin (23).