Enola Gay left everything but tears on stage when they performed their final show of their EU & UK tour on December 8th in Dublin.

In between strobe lights, green smoke, and Guinness spray, Enola Gay transformed the main stage venue at Workman’s into a massive communal mosh pit when they performed on Thursday, 8th December at their last show of the year.

The two acts preceding them, Panikatax and Gurriers, performed with a bass reverb so strong it would make anyone's heart beat to a different time.

Gurriers, who donned a more laid-back set, were joined by Enola Gay frontman Fionn Reilly for their final song, which instantly saw the pressure rise amongst the crowd.

Then it was time for the Belfast band to hit the stage. Doc Marten-adorned, and jeans and t-shirt clad, Enola Gay started off the night’s set with their single, ‘Salt.’

The stage was green-lit in their emblematic grunge colours as lead vocalist Fionn Reilly launched into the band's first track. From the onset, the pit of people at the foot of the stage were yelling the band’s lyrics from the floor back up at the musician.

“We’re Enola Gay,” Fionn panted between breaths after a ferocious first performance. “Thanks so much for coming!”

Next up was ‘Sofa Surfing’ which set the atmosphere alight. A mosh pit began to form at the foot of the stage as the band’s hit began.

Frontman Reilly seemed just as enthralled by his audience as they were of him. As he spat lines of lyrics with an unwavering conviction, he had the indexes of each audience member pointing up to him in time to each line.

With the crowd clapping along, lost in the intensity of the Belfast boys’ sound, Fionn jumped along with the beat created by his crowd, amongst electronically-curated screams of reverb that echoed throughout the song. 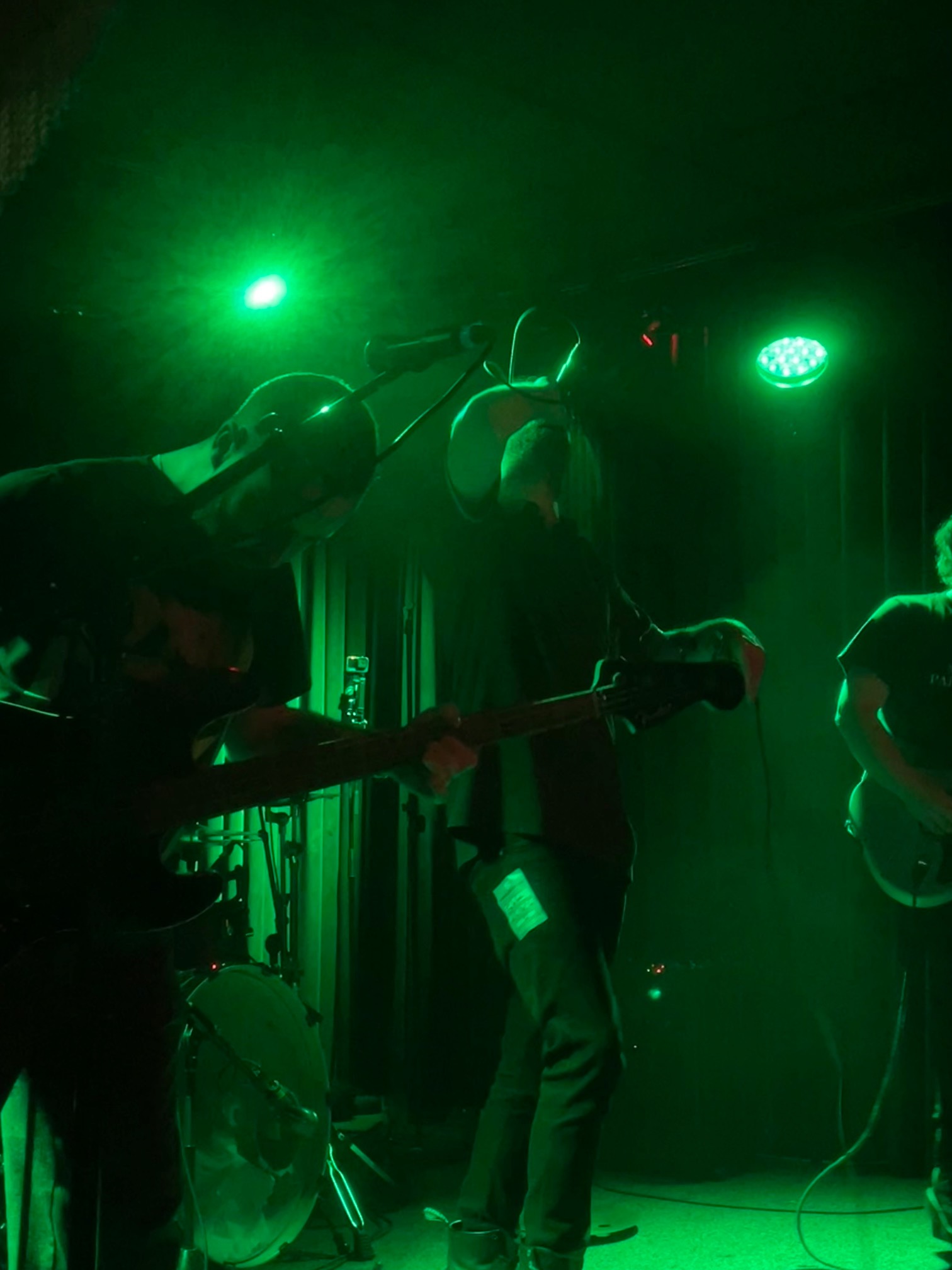 Without hesitation, the band raced on through to ‘Leeches.’ “Let’s see yous fucking move!” Fionn bellowed, introducing the riotous song.

In fitting fashion, smoke leached out to the crowd, back-lit by the green glow that emanated on stage from behind the boys.

As a metallic guitar reverb echoed intensely through the chequered tiles of Workman’s, the mosh pit was a frenzy of limbs and hair as the crowd were taken hold of by the song.

Fionn addressed his audience once more to ask them to give it up for Gurriers, before promptly asking them to “shut up” before the crowd’s explosive energy ran away with them as they launched into their next song.

On their Fender guitars, Joe McVeigh and Bassist Adam Cooper leaned back into each note, strumming continuously as long as their fingers would allow.

“Let’s keep it fucking going, we’re only getting started here!” Next up were ‘Naked Names,’ ‘Headphones,’ and ‘Figures.’

“Come on, come on,” Fionn shouted as he began his next three songs. With the crowd tossing beneath him like an ocean of heads, sweat poured off of the lead singer and onto the crowd beneath him who couldn't get enough, as he carried on in a sweat-soaked t-shirt.

“Thank you all so much for coming down...yous are legends,” he panted in between songs, “fucking legends.”

Mid-set, Fionn cracked a can of Guinness and began dousing the mosh pit before showering himself with the remaining can, blessing his worshippers with the night’s holy water of choice.

From there, he jumped down from the stage and dared to enter the mosh pit, where he was immediately engulfed in the crowd, and sang among them, Guinness-soaked and sweaty.

As the singer scrambled back up on stage, a crowd-surfing audience member kept the momentum going within the pit as he was passed around the heads of those who had just duetted with Fionn.

As ‘Scrappers,’ began, the smell of Guinness wafted slowly through the humid air.

The song began with Reilly swirling his hand around in time to the music as if commanding the mosh before jumping down to join the crowd. The crowd quickly formed a circle that eventually collapsed in on top of the singer.

Once the song’s sudden ending signalled a break, Reilly took a well deserved sip of Guinness before exhaling “fucking hell.”

“If you don’t sing along to the next one, you’re a fucking loser,” and with that, ‘PTS.DUP’ began. 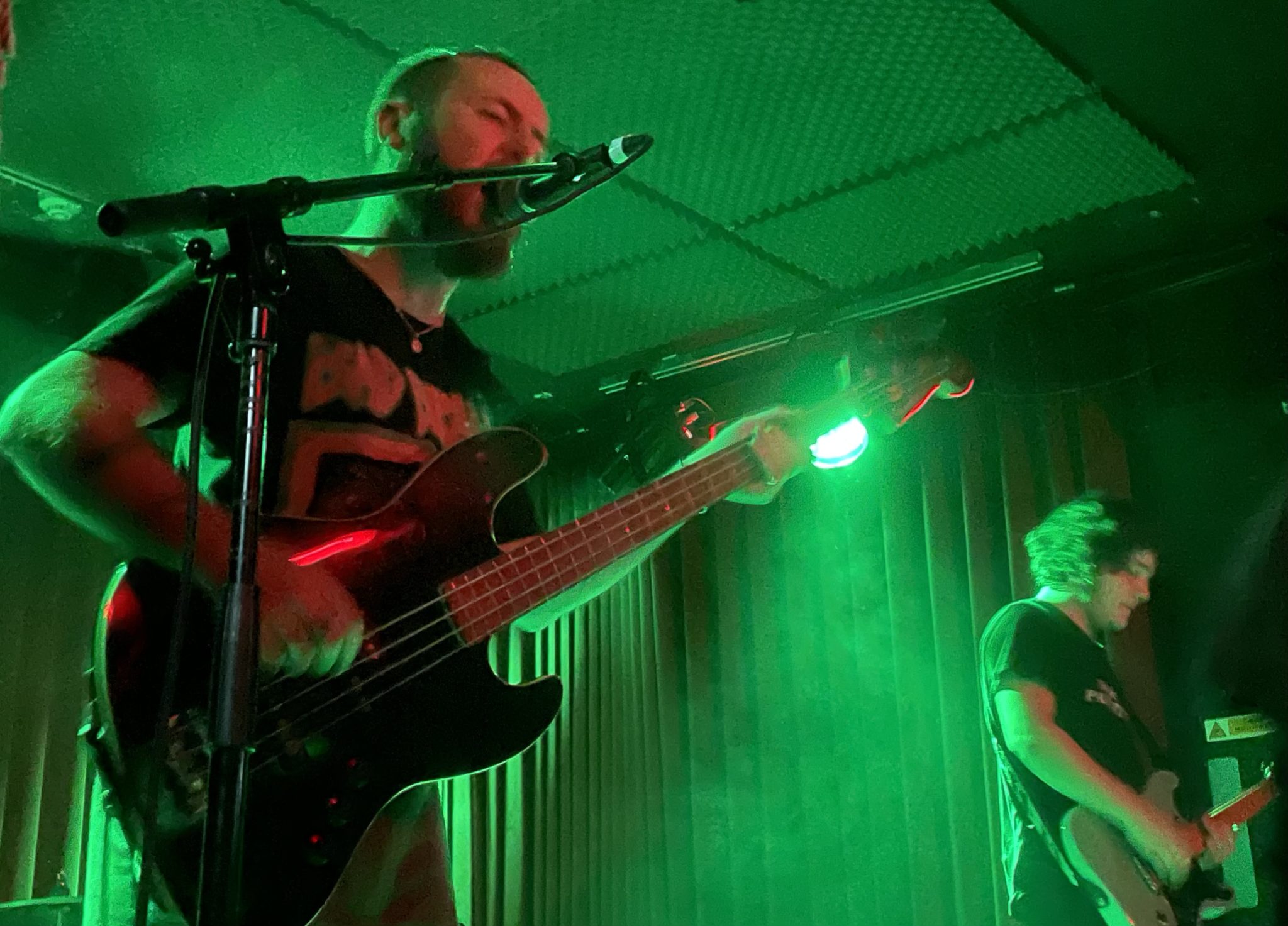 The track saw more crowd surfers, including the band’s guitarist, who dared to enter the pit before he was snatched up and surfed on top of the crowd.

Next up were ‘Cold,’ ‘Malone,’ and ‘The Birth of a Nation.’ The first began with all the ferocity that could be mustered up at this stage into the night and had the audience once more- screaming Enola’s lyrics back up into Fionn’s face.

“Can you believe this was only a tenner?” he asked the crowd between a strong Belfast accent. Giving his crowd a chance to “slow down” Enola Gay began ‘Birth of a Nation.’

Reilly displayed his vocal talents through a more down-beat song through strong rhythms and beats performed by drummer Stevie Curtis.

The politically-charged lyrics were recited against a backdrop of green smoke as the band’s faces were lit up in red.

The guitarists had a chance to display their impressive riffing skills, with three of the group’s members joining in on vocals. The result was a conflicted and sincere melody that sounded melancholic and wanting, with the song’s tune punctuated with long sustained notes.

For their final song, ‘For God & For Ulster,’ the band launched into each line with a ferociousness that once again had their audience swirling around the foot of the stage.

As the Belfast boys tried to retreat behind the sanctuary of the stage’s red curtains, demands for ‘one more tune’ were met with the lead singer of Gurriers making a reappearance. He and Fionn engaged in some head banging before the Enola Gay frontman picked him up and swung him around the stage.

Breathing in the sweat of 25 moshers who were all drenched in each other’s, Enola Gay’s ferocious set alighted the crowd in Workman’s and left everything but tears on stage.

“Thank you so fucking much!” Fionn waved as they signed off for the night.