Irish acts The Mary Wallopers, M(h)aol, The Scratch, Kynsy, Bricknasty and Selló – as well as international artists like July Jones and Shanghai Baby – were among the many highlights of this year’s showcase festival

After two years of events viewed – due to Covid restrictions – via laptop screens, Groningen’s canal-sides, market squares, boat hotels, venues and innovatively repurposed spaces once again came alive with the irrepressible energy of emerging talent this month, as Eurosonic Noorderslag (ESNS) made its long awaited return to the city, from January 18-21.

Of course, the fact that this was the showcase festival’s first in-person event since 2020 is a stark reminder of how recently the pandemic was wreaking havoc across the global music industry – with venues around the world shuttered, festivals cancelled, and the momentum of promising young artists tragically hampered.

While ESNS overcame seemingly insurmountable challenges to continue platforming artists through their digital editions in 2021 and 2022, there’s no beating the rush of a city pulsing with live music. As such, there was a palpable air of celebration and optimism as 44,000 visitors and 315 European artists descended upon Groningen on Wednesday, wrapped up against the January weather, but armed with a refreshingly genuine enthusiasm for the spirit of the festival, and the acts set to play it. Making a showcase festival feel like more than a stuffy industry event can be a challenge, but ESNS pulled it off masterfully – with a creative approach that blended naturally into the pace of life in the small but vibrant city.

From the outset, the diversity of the genres, styles and influences on the programme was declared in no uncertain terms. On Wednesday night alone, in various venues that zig-zagged the city, the Irish talent swung from the eclectic sounds of Bricknasty, to the irreverent folk ballads of The Mary Wallopers, to The Scratch’s high-energy, metal-influenced wielding of acoustic instruments.

What each act had in common, however, was the brilliantly anarchic spirit and DIY ethos that's defining independent Irish music right now – with Bricknasty’s balaclava-clad frontman Fatboy commanding the crowd with both his charming nonchalance and his band’s captivating blend of jazz, neo-soul, R&B, and G-funk elements. While his announcement that they were going to cap off their set with a 15-minute jam might not have immediately inspired the confidence of new listeners, it proved to be one of the highlights of the performance, with any remaining inhibitions shed as Bricknasty drew the crowd into a completely immersive musical experience.

There was a unique pleasure in seeing people from outside of Ireland connect so deeply, and wildly, to the music of The Mary Wallopers, too – with the irony of performing in a former church not lost on the fearlessly outspoken, anti-establishment folk group. Joined by their expanded band, they would also offer up a more intimate, but no less raucous, performance perched on the bar of Groningen’s O’Ceallaigh Irish Pub the following afternoon, filmed for the iconic German music TV show, Rockpalast. 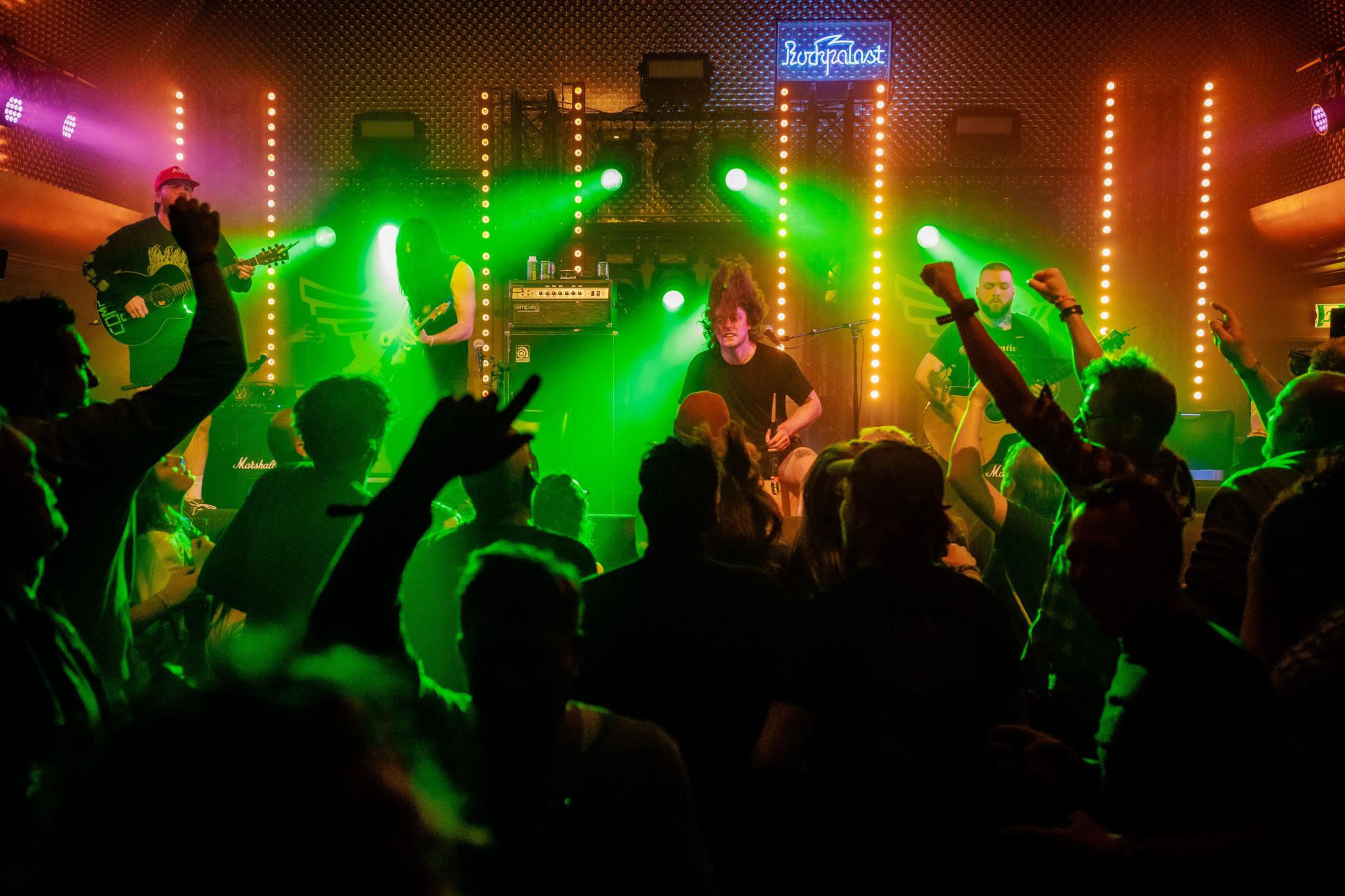 Closing out the first night of the festival, The Scratch wasted no time in transforming their audience from sensible industry professionals into moshpit-dwelling goblins – with the four-piece’s famed intensity perfectly suited to their 1.15am set time. Their renowned audience engagement was just as convincing overseas as it is at home, as they continue to strike a brilliant balance between phenomenal musicality and an unapologetically gas approach.

Despite ESNS running well into the night, the action kicked off early the following day – though, thankfully, Scottish singer-songwriter Katie Gregson-MacLeod’s special performance could be enjoyed alongside a caffeine fix, as she played in a fully functioning coffee shop. She’s clocked up a monumental number of streams in recent months, but the recent Hot Press interviewee once again proved herself to be much more than just an online sensation, with a voice that enraptured the packed café, soaring over the sounds of clinking coffee cups.

As the day progressed, the international talent continued on the other side of Grote Markt – with Shanghai Baby playing the self-described “club for the international pop underground,” Vera. Having originally risen to prominence as the bassist for Madrid band Hinds, the artist also known as Ade Martin offered up a promising taste of what to expect from her hard-edged indie-rock solo career, following the release of her EP01 last year. 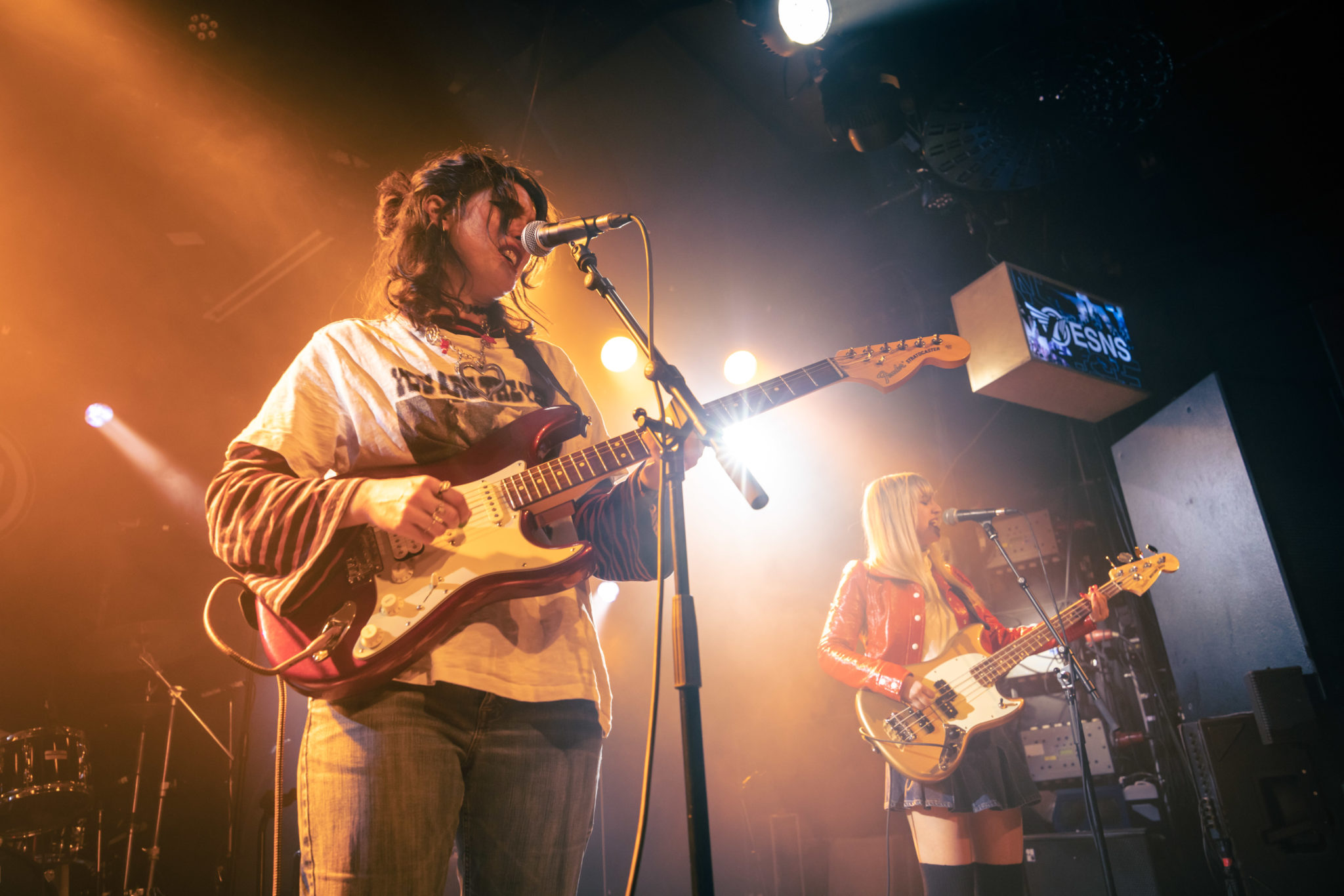 Coinciding with the release of their new single, ‘There We Are John’, New Pagans continued to build anticipation for their upcoming album, Making Circles of Our Own (out February 17), with a well-attended set performed inside a unique space in one of the city’s schools, Werkman College. With singer Lyndsey McDougall at the helm, and powerful emo influences under their belt, the Belfast band made a strong impression – serving up a sound that’s both in tune with the current innovations in alternative rock, and dazzlingly distinctive.

Ireland’s thriving drill scene was also celebrated on Thursday night, with Clondalkin rapper Selló bringing his hard-hitting sound, irresistible hooks, and irrepressible hometown pride to a major stage in the Grand Theatre. Joined by his hypeman and backed by a drummer, Selló proved exactly why he’s got three nominations at the upcoming RTÉ Choice Music Prize to his name. At one point splitting the room into two halves, and moving confidently between the crowds on the venue floor, the universal appeal of his self-described “Gaelic Drill” sound was undeniable – even with lyrics deftly laced with local shout-outs and Irish-language references. It turned out to be a quick turnaround for the drill star, too, with Selló making his The Late Late Show debut in Dublin the following night.

The Grand Theatre went on to play host to Slovenia’s July Jones, one of the winner’s of the Music Moves Europe Awards 2023, which were announced during the course of ESNS. Bringing a bold, provocative edge to electro-pop, the performance immediately marked the star as a name to take note of – as she commanded the stage with her effortlessly original style and vision. With her skills as a songwriter already established, following credits on songs by the likes of BTS, her own solo career looks set to put her on course for world domination. 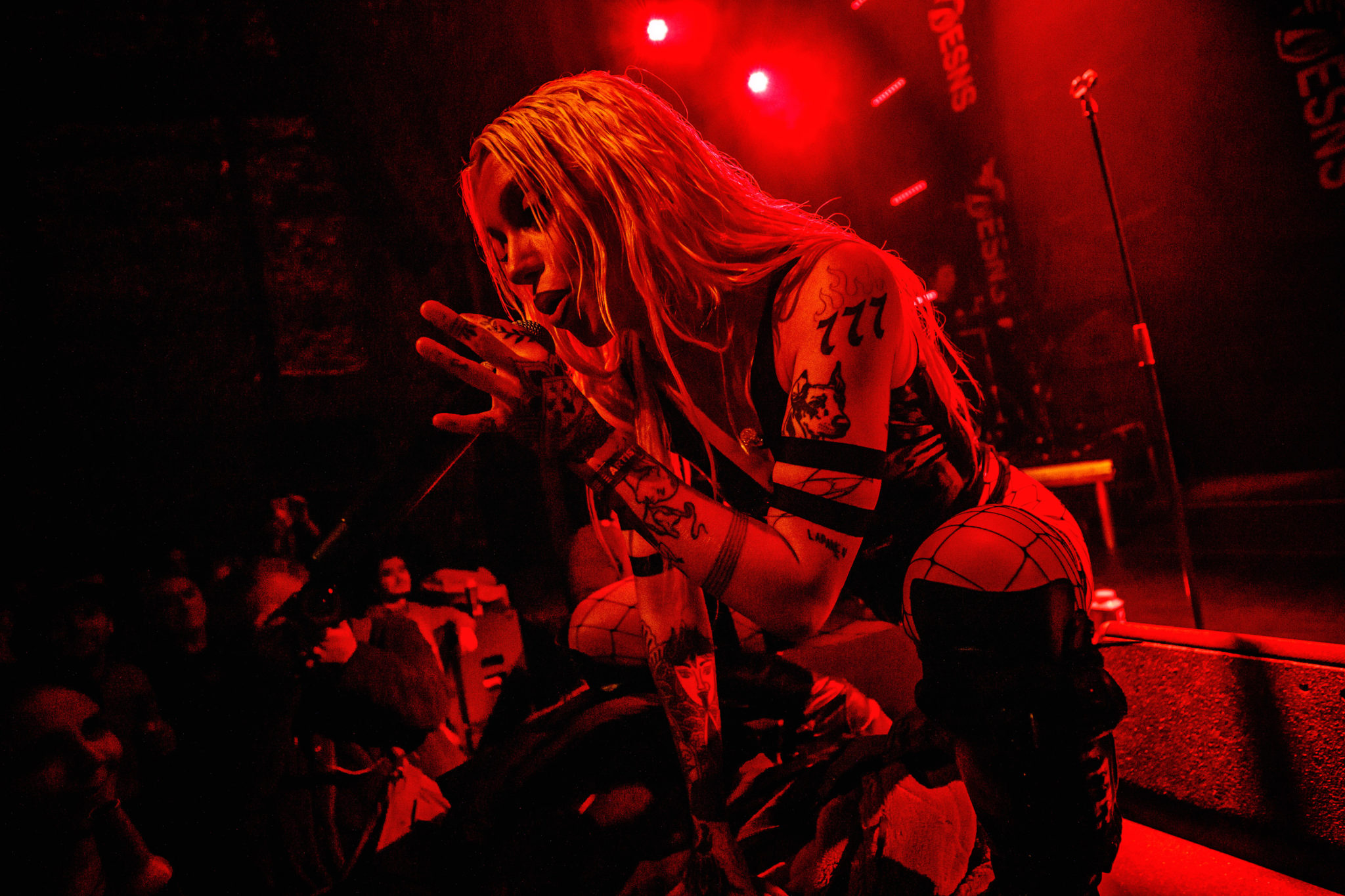 By the time most visitors had finally become experts in both navigating Groningen’s multitude of venues, and dodging the city’s seemingly endless fleets of bikes, it was Friday – and while the end of Eurosonic 2023 was in sight, there was a remarkable selection of fearlessly progressive, boundary-pushing acts in store before the night was out.

This year saw ESNS put a special spotlight on Spain, and the diverse sounds emerging right across the country – which they celebrated with a special showcase at Stadsschouwburg Theatre on Friday evening. Inside the dramatic venue, León Benavente, an indie-rock supergroup of well-known Spanish musicians, treated an intimate audience to a captivatingly high-energy set, which effortlessly pulled in listeners whether they could comprehend the language onstage or not – highlighting the boundary-transcending spirit at the heart of ESNS. 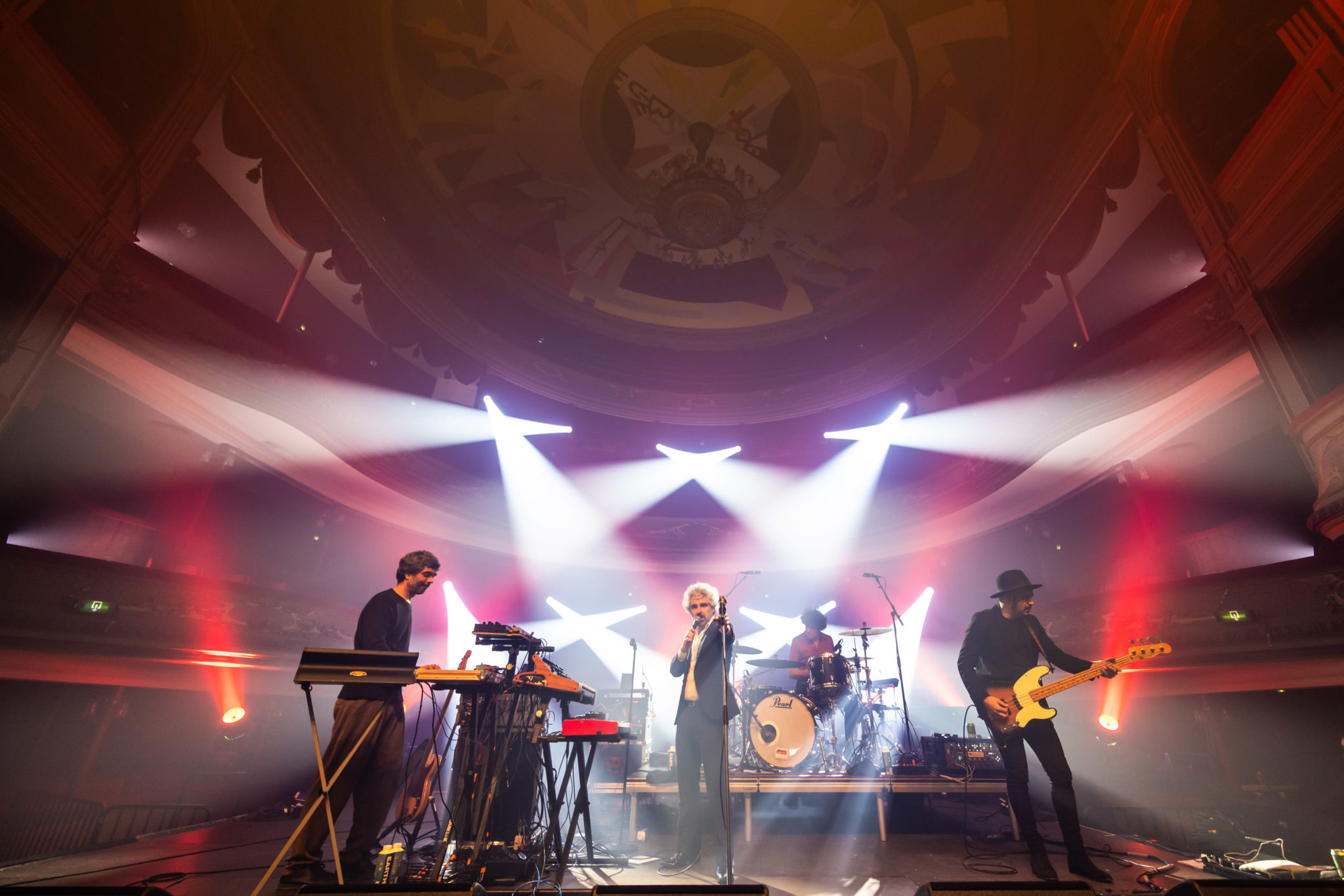 Over at Huize Maas, Kynsy was showcasing her expansive, genre-shifting approach to her craft in front of a jam-packed room. While catering for the indie-rock crowd, the Dublin artist’s set was also full of the idiosyncratic impulses that make her songs so compelling, with her sensitive ear for melody powerfully juxtaposed against a jolting guitar sound.

The Irish talent continued with M(h)aol – whose brazen back-and-forths with audience members provided some of the unexpected highlights of the week. While the intersectional feminist band's bold stance on typically taboo conversations surrounding gender and sexuality is certainly a draw, the set also provided a chance to soak in the power of their sound – which, while remaining defiantly raw, has been honed in a sharper direction than ever, in the run-up to the release of their debut album, Attachment Styles, on February 3.

A similar spirit of resistance was carried on into the night by Big Joanie, a London-based Black feminist punk band who could effortlessly take the room from a revolutionary cover of Solange’s ‘Cranes In The Sky’, to urgent political statements. It was an expansive approach that they also explored on their latest album, Back Home – combining their gritty punk edge with much wider, experimental ideas.

This genre-blending, thrillingly independent ethos was shared among countless acts at ESNS 2023 – a testament to the ability of emerging European musicians to keep breaking new ground with their work, in the midst of the many challenges of the pandemic. With that DIY spirit now a firm fixture of homegrown scenes on these shores and beyond, the return of ESNS signals a bright few years ahead for European music, with these ever-evolving artists once again – or even perhaps for the first time ever – bringing their music to live audiences around the world. 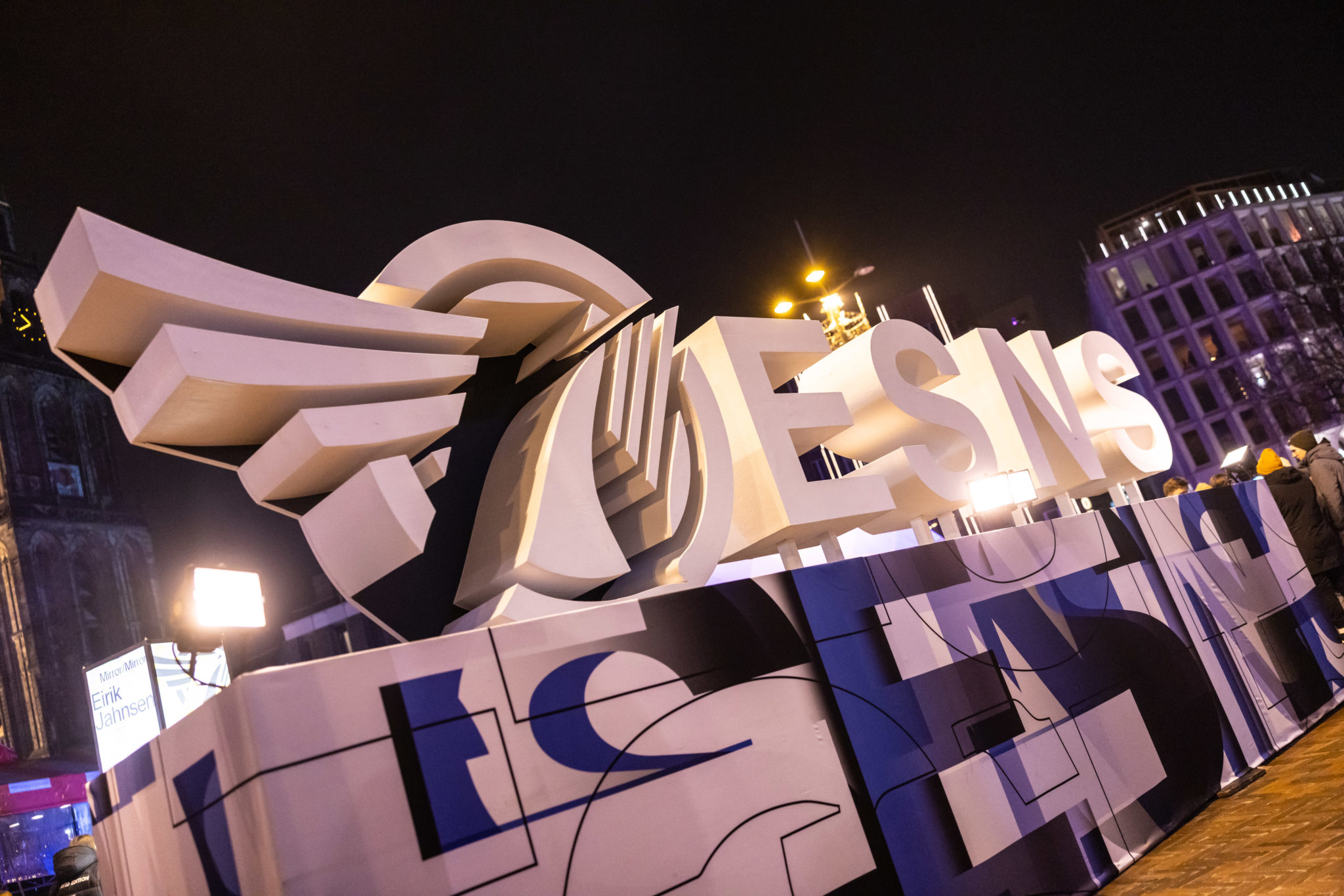