TW: This article contains mentions of abuse and sexual assault which some readers may find distressing.

An Observer investigation has revealed that TikTok is promoting misogynistic content to young people, including videos from online media personality Andrew Tate. Tate's content has become widely popular on the social media platform recently, and charities are warning that it is creating "dangerous cultures."

Andrew Tate has previously declared that women are "a man's property," and has even stated that rape victims must "bare responsibility" for their attacks. The Observer investigation has revealed that TikTok's algorithm is promoting this content to young people via its curated 'For You' homepage, despite claiming to ban it.

TikTok allows users to join its platform from age 13. In order to avoid being influenced by any previous search history, a new account was set up for this investigation. The page was created for an imaginary 18-year-old, using a fake name and date of birth.

At first, the teenager's account was shown a range of content including comedy clips and discussions about mens' mental health. After watching some content which appeared to be aimed at male users - including a clip from the 'Alpha Blokes' podcast and a clip of a TikTokker talking about how men "don't talk about their feelings" - the algorithm began showing more videos that appeared to be tailored towards men.

Without "liking" or searching for any content, the 'For You' homepage quickly began suggesting several of Andrew Tate's videos. After watching two of the videos, the account was recommended several more. The next time the account was opened, the first four videos were by Tate, from four different accounts. While the algorithm also suggested content from Dr Jordan Peterson (a Canadian psychologist known for his rightwing views), mens' coaching videos, and videos from men's rights activists, Tate's content was by far the most prevalent.

After opening the app again a week later, eight of the first 20 videos shown to the fake account were of Tate. The suggested clips included a video of the self-declared "alpha" saying that people who seek mental health support are “useless.” In another video, the 35-year-old says that most mens' lives "suck," because they have "no power" and "no sex from their wife." Tate also describes his own girlfriend as "very well trained" in another video shown to the fake 18-year-old's account.

In other clips, Tate talks about hitting and choking women, trashing their belongings and stopping them from going out. "It's bang out the machete, boom in her face and grip her by the neck. Shut up bitch," he says in one video, where he acts out how he would attack a woman if she accused him of cheating. 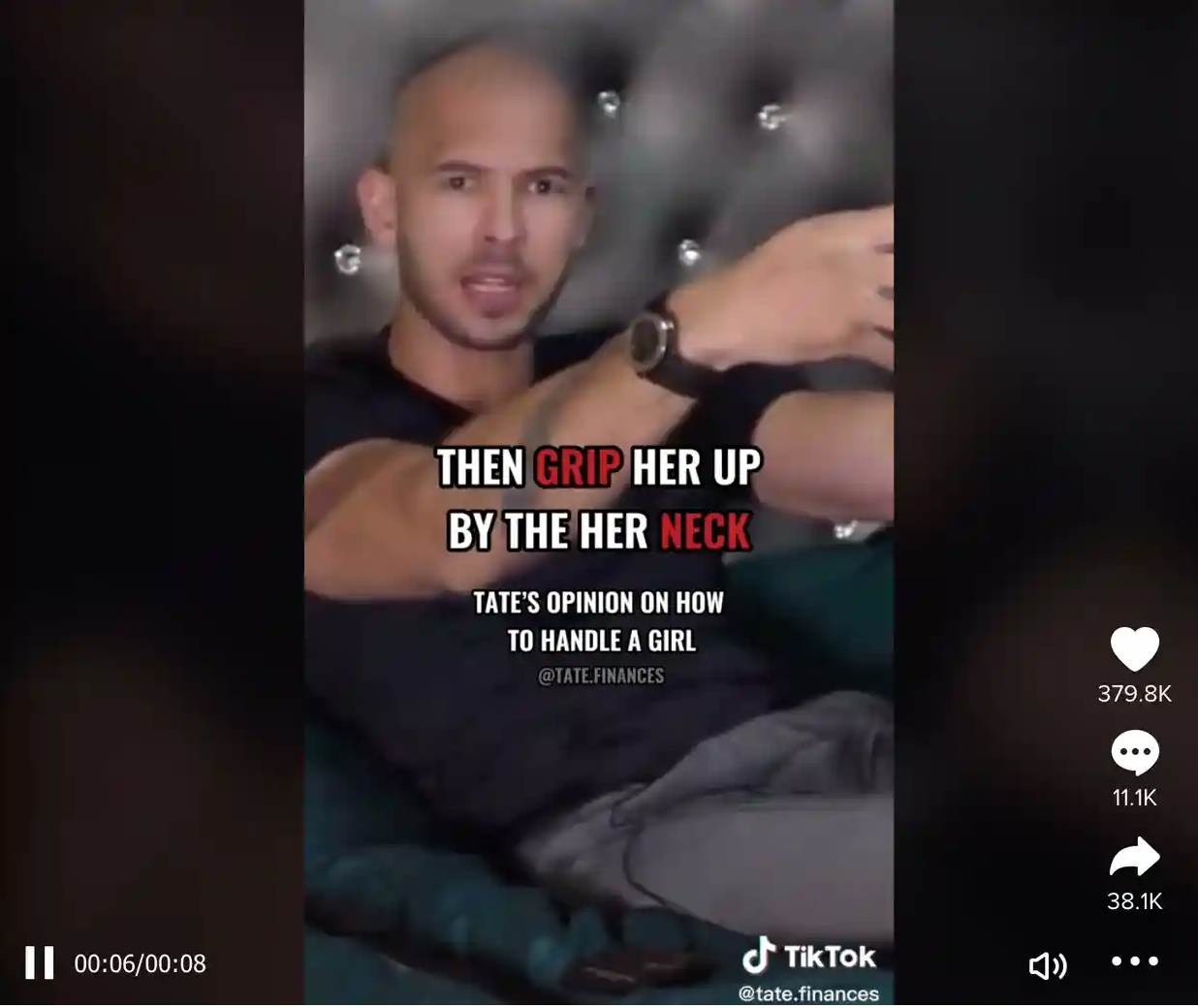 Tate's views have been described as extreme misogyny by domestic abuse charities, who say that the kickboxer and former Big Brother contestant is capable of radicalising men and boys to commit harm offline. Videos of Tate have been watched 11.6 billion times, and several accounts have been created "in support" of the kickboxer's views.

Callum Hood, head of research at the Centre for Countering Digital Hate, said: “The dangerous thing is that it is very eye-catching content, and the TikTok algorithm in particular is so aggressive that you only need to pause for a few moments before it will begin to recommend similar content to you again and again.”

TikTok said: “Misogyny and other hateful ideologies and behaviours are not tolerated on TikTok, and we are working to review this content and take action against violations of our guidelines. We continually look to strengthen our policies and enforcement strategies, including adding more safeguards to our recommendation system.”

The Hog on Climate: "Reasonable people are open to persuasion. The fundamental challenge isn’t to win the extremes, but the middle ground"
HSE urges public to get latest Covid-19 booster vaccine
Nicola Sturgeon will challenge Westminster for blocking Scotland's gender reform bill
Huge spike in STI cases reported since January 2022
Travellers Together Preventing Suicide to host concert fundraiser
Dublin's The Hole in the Wall issued closure notice due to "filthy conditions"