The English singer made headlines after donning the Glastonbury Other stage with Olivia Rodrigo.

Lily Allen has spoken out about her own abortion, saying not wanting to have a baby at the time was "reason enough".

The London star made headlines last week after performing with Olivia Rodrigo at Glastonbury. The duo performed Allen's anthem 'Fuck You', dedicated to the US Supreme Court judges who voted to overturn Roe V Wade. The 1973 case had supported people's liberty to choose abortion, but also impacts fertility treatments, oncology and disability rights for bodily autonomy.

Almost a week after her performance, the pop singer has taken to her Instagram stories to speak out about her own termination, criticising those who feel the need to "justify" abortions with "exceptional reasons."

In her story the singer-songwriter said: "“I wish people would stop posting examples of exceptional reasons for having abortions. Most people i know, myself included, just didn’t want to have a fucking baby. AND THAT IS REASON ENOUGH! WE DON’T HAVE TO JUSTIFY IT.

"It shouldn't have to be said, and I think all these examples just play into the hands of the baddies," the musician exclaimed. 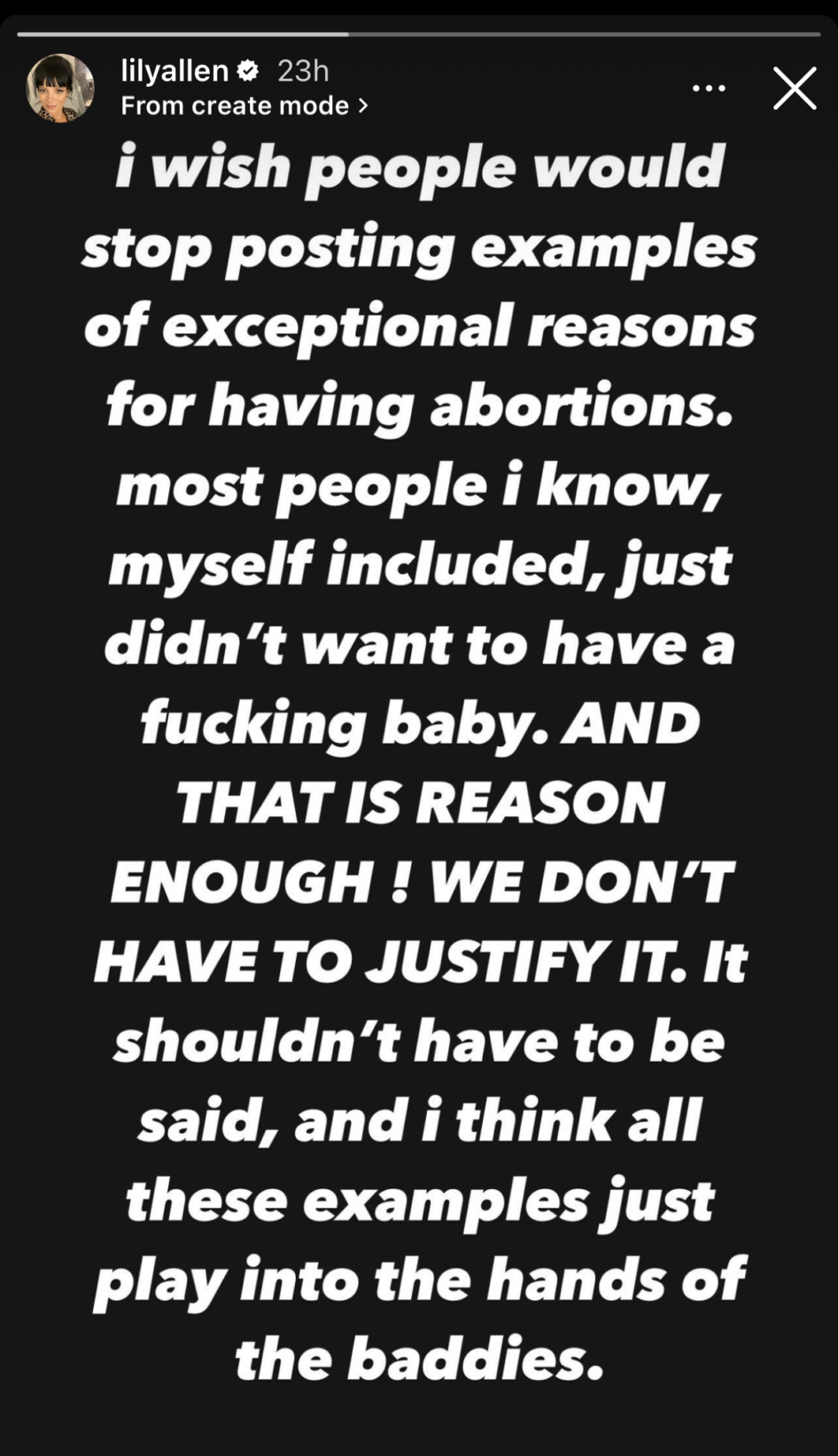 Lily Allen took to Instagram to voice her opinion about abortion rights.

The 37-year-old joined Olivia Rodrigo's set on the Other Stage on the Saturday of Glastonbury. Rodrigo created a career and festival-defining moment by explaining to the crowd: "Roe v. Wade, which is a law that ensures a woman’s right to a safe abortion, a basic human right” had been overturned.

"I’m devastated I’m terrified and so many women and so many girls are going to die because of this. I wanted to dedicate this song to the five members of the supreme court, who showed us that at the end of the day they truly don’t give a shit about freedom.

"This song goes out to the justices, Samuel Alito, Clarence Thomas, Neil Gorsuch, Amy Coney Barret, and Brett Kavanaugh. We hate you."

The performance has been shared across social media repeatedly since the set on June 25.

Following her performance with Rodrigo, Allen took to Instagram, saying: "Quite emosh. Things are truly messed up, but at least my babies got to see their mamma play and slay Glastonbury with their favourite pop star. They were very proud and so was I.

“I didn’t know whether I’d be able to get up on a stage like that sober again if I’m honest, a part of me thought it was all in the past. I had the most amazing day. Thanks Olivia Rodrigo for having us. You smashed your first Glastonbury.”

The 'Smile' singer also hinted at the possibility of new music, commenting: "Maybe I won't hang up my (microphone emoji) just yet."

Check out the duo's performance below.

Transphobic myth of women's "erasure" spreads following the Roe v Wade ruling
Roe V Wade: How can we productively channel our anger for the US into change for the North?
One in 10 under 35 have attempted suicide, report shows
Mind Magic - Using Psilocybin To Treat Mental Illness: "I've never had such a positive, immediate response to a therapy"
Roadside drug testing system launched in Ireland
First Fortnight Mental Health Art & Culture Festival returns this January